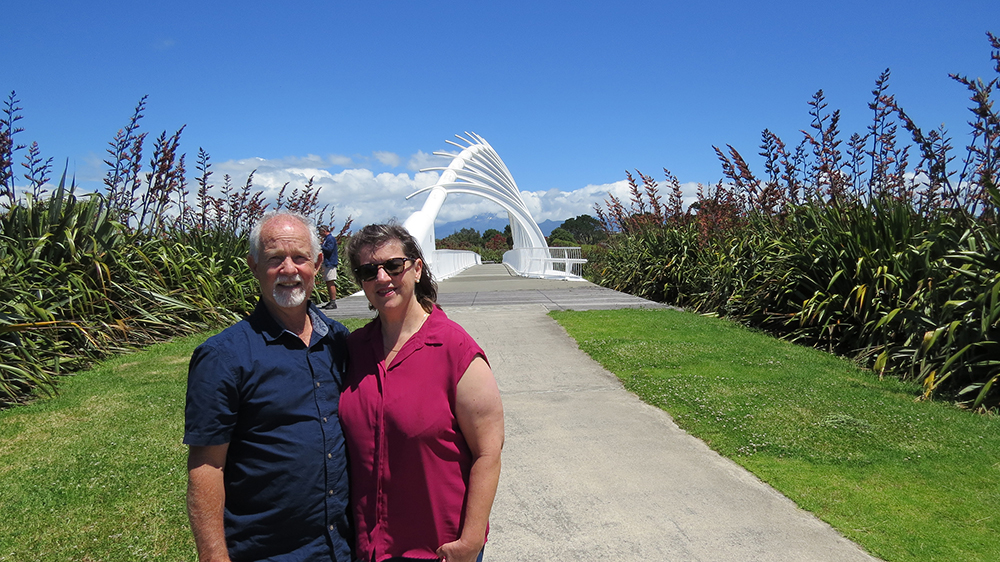 When Elmien and Gerrit Feldtmann look out their kitchen window, they see and hear wildlife of a different kind from their hometown in South Africa. Trilling in the bush that surrounds their parklike property in Taranaki are fantails, finches, wax-eyes, and warblers. As we sit almost close enough to touch them, the pretty sound wafts in through the open slider and fills our ears.

It also fills Elmien’s heart; she loves her wee spot in this two-storey treehouse-style home – and not just for the plethora of little creatures outside. She also loves the fact that her doors are wide open to the breeze and that she can relax on her deck, undisturbed. Mostly, she loves that if she pops out for a bit and forgets to lock up, her

When Elmien and Gerrit Feldtmann look out their kitchen window, they see and hear wildlife of a different kind from their hometown in South Africa. Trilling in the bush that surrounds their parklike property in Taranaki are fantails, finches, wax-eyes, and warblers. As we sit almost close enough to touch them, the pretty sound wafts in through the open slider and fills our ears.

It also fills Elmien’s heart; she loves her wee spot in this two-storey treehouse-style home – and not just for the plethora of little creatures outside. She also loves the fact that her doors are wide open to the breeze and that she can relax on her deck, undisturbed. Mostly, she loves that if she pops out for a bit and forgets to lock up, her home will likely be secure on her return. For Elmien, husband Gerrit, and daughters Magdali and Ezilna, immigrating to a life of peace and safety in New Zealand was a wish come true.

Elmien was born in the small South African town of Carolina in the province of Mpumalanga (“where the sun rises”). She was raised, with three brothers and two sisters, on her family’s sheep, beef, and cropping farm in the Old Eastern Transvaal. Elmien went to primary school in Badplaas, to boarding school in Carolina for her secondary years, then to Pretoria University.

South Africa’s constitution recognises 11 official languages; Elmien is fluent in Afrikaans and the local dialect of siSwati. Her father is a staunch Afrikaner Boer, and his children were not encouraged to speak English in their home. And although Elmien’s schooling included English as a compulsory subject to year 13, she laughs at the truth it was her daughters who taught her the English she speaks today: “As eight and 12-year-olds, they taught their mum! I just laugh about my English, but I make peace with it. As long as people understand, it’s okay. My tenses is mingled, but, oh well … ” What Elmien mingles in grammar, she makes up for in gracious chat and a warm-heartedness that needs no accuracy.

A university degree in social work led Elmien from a counselling job in Louis Trichardt in 1986 to one as a military vetting officer in Pretoria in 1987. Her role there was not so much in social work as in sleuthing. It was fascinating work. Elmien would ‘vet’ the credentials and personalities of restricted, top-secret, confidential information holders to ensure their validity. She’d then interpret the noted background checks, psychometric tests, and polygraph tests to determine the integrity of those at the helm of South Africa’s security. Elmien rose through the ranks and then relinquished her position to take the opportunity of a trip to Bern, Switzerland, to work as a military attaché administration assistant for three years.

After 13 years working for the military, Elmien returned to Pretoria and promptly fell in love with a mechanical engineer named Gerrit. The two were married eight months later and moved to the Gauteng province industrial city of Vanderbijlpark where they settled, bought a 14-hectare ‘living unit’ bare block of land in Witrivier (White River), and had two daughters. Gerrit worked in a macadamia nut processing plant, gleaning horticultural info on the nature of the tree and the couple planted around 7000 of them on Witrivier.

When Ezilna started school, Elmien took on work in an alcohol and drug support role. In 2007, the farm’s macadamias were beginning to bear fruit when the political and social situation in South Africa – already volatile since the late ‘90s – further de-stabilised. Unemployment skyrocketed, and people were killing and stealing for food in a “culture of brutality”.

The Feldtmann’s home was invaded, cars were taken in plain view from outside the front door, farm fences cut down, macadamia nuts stolen. The family weren’t alone in these attacks; farmers from all over the region were fearing for their lives. Every cent earned went into increasing the security of their property and possessions but with two young daughters to protect, Gerrit thought: “We need to look for a safe place.”

They had to. “Fundamentally, for the safety and future of our children. Crime and brutality were – and still are – out of control in South Africa. When you contacted me for this interview, I was just informed that a dear friend of mine, who was like a mother to me when I started to work as a newly qualified social worker, was murdered in her home in Louis Trichardt,” says Elmien tearfully.

The Feldtmanns began looking to New Zealand. Elmien applied for a resident visa which was granted 12 months later, as was her new position as a social worker at the Open Home Foundation in New Plymouth.

The Feldtmann’s home in South Africa

“When we decided to emigrate, it was not because we don’t love our country or its people. It was because circumstances beyond what we can control have become too dangerous and unsafe for our family. Putting in yet another alarm, a higher security fence, another security system to keep us safe was all we were working for. We explored countries at that time popular for South Africans to emigrate to, and New Zealand had social workers as a shortlisted skill,” she says.

They left Gerrit to pack up the farm and list it for sale, and in 2008, Elmien and the two children landed at Auckland Airport. It was cold and wet – typical New Zealand winter weather and a climate that Elmien struggles with, even in a Kiwi summer: “It was a dry heat and a dry cold in South Africa. You could always sit on the crispy-dry grass and not get a wet bum!”

The Open Home Foundation had arranged temporary accommodation for the family at New Plymouth’s Top Ten Holiday Park. Elmien had two weeks before her job started to find a rental and a school for Magdali and Ezilna, which she did with the help of the Foundation. Gerrit rejoined them, found work in his field as a mechanical engineer with ABB Transformers and over the next 12 months, the family moved a couple more times before hearing the news that their farm in South Africa had sold.

This enabled them to purchase their current home and the four feel privileged to be so happy there, that they’ve not wanted – or needed – to move since.

“We tried to embrace New Zealand as our country and as our own. I just have to open my mouth for people to realise I am South African but having travelled a bit we didn’t find it hard to assimilate into a new culture. We made a point not to befriend only South Africans but locals too – Kiwis and Indians, Indonesians, Lebanese. We were so fortunate to make friends with work colleagues and the parents of our children’s friends,” says Elmien.

But it was busy – adapting to a new country, running around for the children, trying to make friends, and balancing it all with working full time.

“Did I feel disadvantaged as an immigrant? Sometimes I do. Although I had a bachelor and a master’s degree and was the director of an NGO (Non-Governmental Organisation), this did not have any weight in terms of applying for my job at the Foundation nor even for my job as leader of a multi-disciplinary team at Taranaki District Health Board. Saying that, I am also content, as the culture is different. I had to learn the intrigues of New Zealand culture, start at the bottom, and build on knowledge.

“I also had to learn the way of how things are done here. South Africans tend to be very direct – don’t beat around the bush. This is seen as impolite in New Zealand but is totally fine in South Africa. New Zealanders are much more indirect and subtle. This is a thing that I needed to learn and still need to work on!” she laughs.

Elmien says their daughters are happy in New Zealand and regard themselves as Kiwis. But they were old enough when leaving South Africa to remember and miss the proximity of their old home to Kruger National Park where they would camp among lions and elephants. They also miss traditional foods, though old favourites, like rusks, biltong (dried, cured meat), melktert (custard tart), bobotie (curried meat and fruit), and braai (barbequed food and sitting around the fire to eat) can usually be sourced or at least recreated. 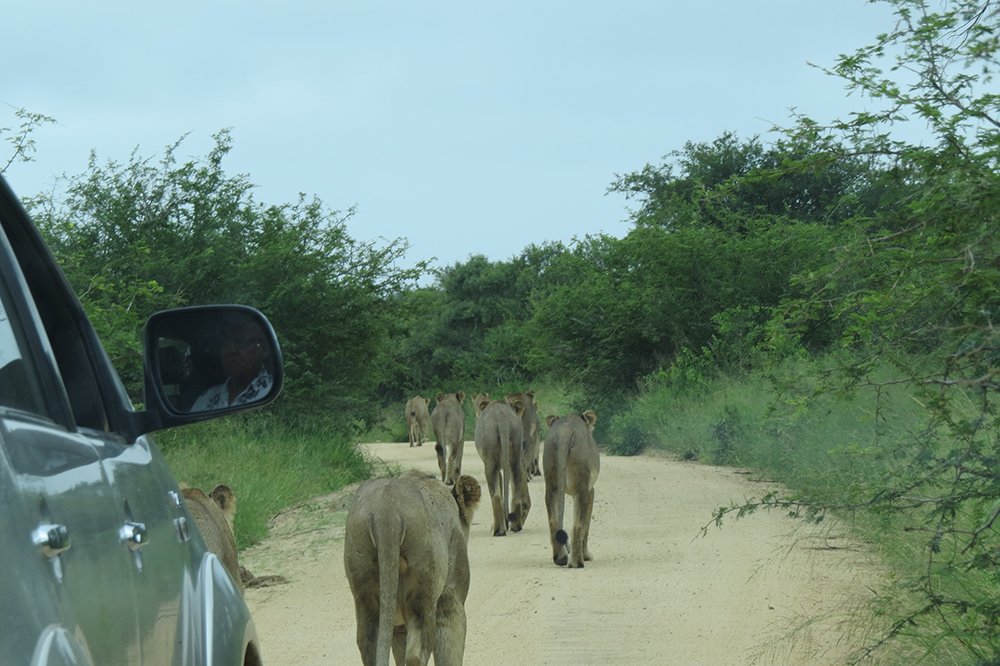 On safari in South Africa

“The children love it here. I did a te reo course at WITT and we had to look at our whakapapa. I did the girls a family tree, so they know where they come from. The Māori language also helps me with my job as it helps me build trusting relationships with people in need; victims of family violence and E.D. admittees,” she says.

The home she left behind helped forge these skills; Elmien refers to the extreme stress and watchfulness of daily life in South Africa. Being on high-danger alert to protect your life and that of loved ones instils resilience and the ability to think quickly and outside the square. The sense of being able to walk anywhere without fear is all that matters now.

“Due to political turmoil in South Africa, I am not really into politics. My motto was more to be a good and valuable citizen of New Zealand, contribute to doing the best I can for my new country, and provide a safe home for our children. We love it here – the outdoors, generosity, friendliness. Warm people, the giving and unselfishness of New Zealanders. If there is need, they will not hesitate to give.”