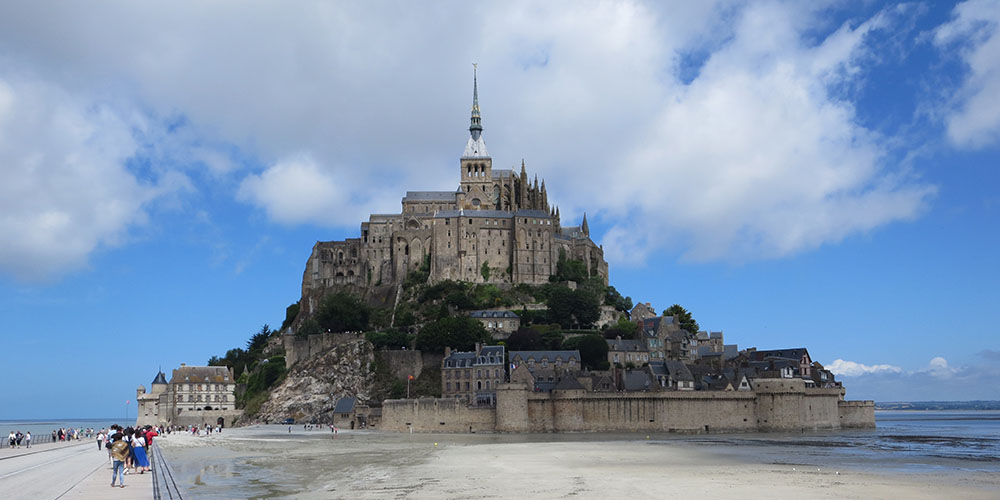 The United Nations Educational, Scientific and Cultural Organization (UNESCO) aims to promote world peace and security through international cooperation in education, arts, sciences, and culture. Founded in 1945, it has 193 member states and 11 associate members. One of its goals is to preserve the world’s regional and cultural history and heritage. To this end, the World Heritage Committee was established in 1976 and the first sites inscribed on the World Heritage List in 1978. To be included on the list, sites must be of outstanding universal value and meet and maintain at least one out of ten selection criteria (UNESCO, n.d.).

On her travels over the years, Alina Suchanski visited many places on UNESCO's World Heritage List. She reflects on her experiences with some of these sites, including those in her native Poland.

The United Nations Educational, Scientific and Cultural Organization (UNESCO) aims to promote world peace and security through international cooperation in education, arts, sciences, and culture. Founded in 1945, it has 193 member states and 11 associate members. One of its goals is to preserve the world’s regional and cultural history and heritage. To this end, the World Heritage Committee was established in 1976 and the first sites inscribed on the World Heritage List in 1978. To be included on the list, sites must be of outstanding universal value and meet and maintain at least one out of ten selection criteria (UNESCO, n.d.).

On her travels over the years, Alina Suchanski visited many places on UNESCO’s World Heritage List. She reflects on her experiences with some of these sites, including those in her native Poland.

POLAND – Reborn from the ashes

Poland is a beautiful country in the heart of Europe. Its location in the past proved perilous, as the lowlands between the Baltic Sea in the north and the Carpathian Mountains in the south have often been trampled by armies coming from east, west and north. The Carpathians proved barrier enough to stop invasion from the south. Although many of Poland’s heritage treasures were destroyed by war, several interesting and unique sites have survived and made it to the UNESCO World Heritage List.

One of those is in the capital city, Warsaw, which earned its World Heritage status for the meticulous restoration of Warsaw’s Old Town (built during the 12th and 13th century) turned to rabble during World War II. After the war, a five-year campaign by its citizens resulted in near-total reconstruction of Warsaw’s churches, palaces, and marketplace, spanning eight hundred years of history.

Warsaw’s Old Town in 1945 and after restoration. From an old postcard. 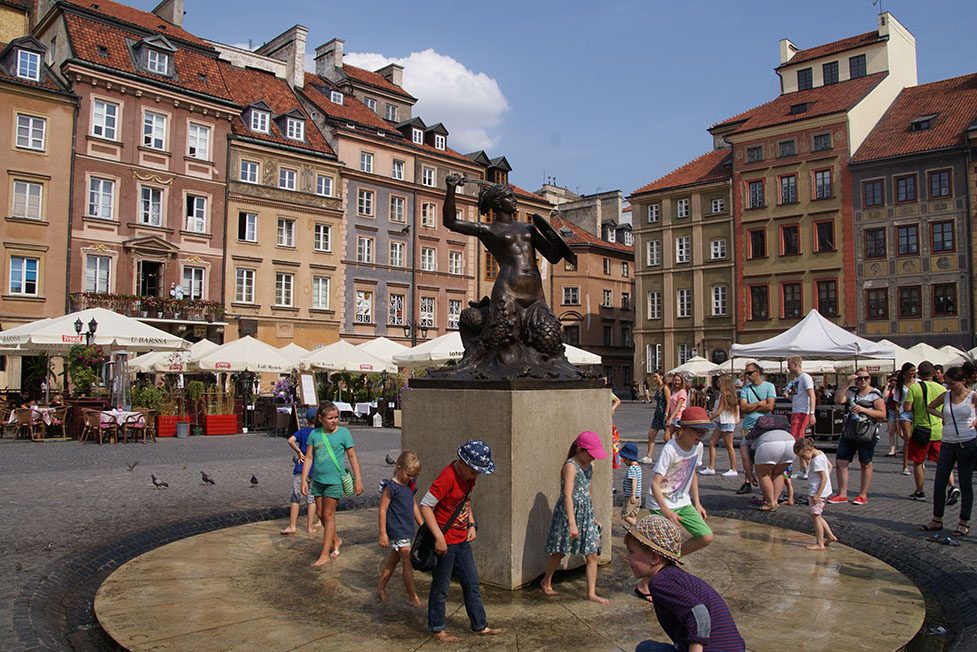 Children playing under the statue of the Warsaw’s mermaid in the city’s Old Town, 2015. Photo: Alina Suchanski

In contrast, Cracow, the former capital of Poland and seat of Polish kings, suffered relatively little destruction during WWII, leaving most of its historic monuments intact. Situated at the foot of the Wawel Hill with its Royal Castle, Cracow “is one of the most outstanding examples of European urban planning” according to UNESCO. It boasts Europe’s largest market square with the 15th-century Cloth Hall. Cracow’s Jagiellonian University, founded in 1364 by King Casimir III the Great, is the oldest university in Poland and the 13th-oldest university in continuous operation in the world.

Nearby town of Wieliczka is home to one of the world’s oldest salt mines established in the 13th century and operating until 2007. Today, it’s a major tourist attraction taking visitors on a tour 135 metres underground through corridors dug through large deposits of salt, past an underground lake, and through four chapels adorned with statues and chandeliers made of salt crystals.

On my many trips to Poland, I’d often incorporate other countries in my itinerary. My sister and I went on several bus tours that took us to Scotland, Italy, France, Spain, and the Baltic Republics.

In Scotland, we saw Hadrian’s Wall, built by the Romans to guard the wild north-west frontier of the Roman Empire. Its construction started in 122 AD during the reign of the emperor Hadrian. Stretching 117 km from coast to coast and its original dimensions of 3m wide and 4m high, Hadrian’s Wall marked the boundary between Roman Britannia and unconquered Caledonia. However, in the centuries following the end of Roman rule, the top layers of the wall were gradually dismantled, and the rocks used by the locals for their building projects.

Our eight-day tour of Scotland went fast and before we knew it, we were crossing the Channel and heading back to Poland, but instead we seized the opportunity and boarded a train to the French capital.

Here we indulged in a two-day frenzy of sight-seeing, visiting the Eiffel Tower, the Notre-Dame Cathedral, the Sacre-Coeur Basilica, the Louvre Museum, and walking along the historic banks of the river Seine.

We also took a trip to Mont-Saint-Michel. Although not as famous as the sites listed above, this is truly a unique and unforgettable spot.

In order to see this marvel, we hitchhiked across Normandy to the coast of Brittany. Travelling along perfectly flat fields of various crops, we were suddenly dumbfounded by an extraordinary silhouette of a distant fortress seemingly floating on water above the fields. As we neared, we saw it perched on a rocky islet amongst vast sandbanks exposed to powerful tides. The island’s main building is a Gothic-style Benedictine abbey dedicated to the archangel St Michael. Built between the 11th and 16th centuries, the abbey and the village standing in its shadow are surrounded by impenetrable stone fortifications.

In the Middle Ages, the Mont-Saint-Michel sanctuary, accessible only by boat, was a place of religious pilgrimage. Today, it’s a major tourist mecca accessed via a causeway constructed in 1879. The UNESCO website says that “Mont-Saint-Michel is one of the most important sites of medieval Christian civilization”.

Our next destination was Barcelona, renowned for its unique architecture by Antoni Gaudí, whose amazing creativity was inspired by nature. The columns in the famous Sagrada Familia Cathedral resemble tree trunks branching off at the top with plenty of other references to the animal and plant world. 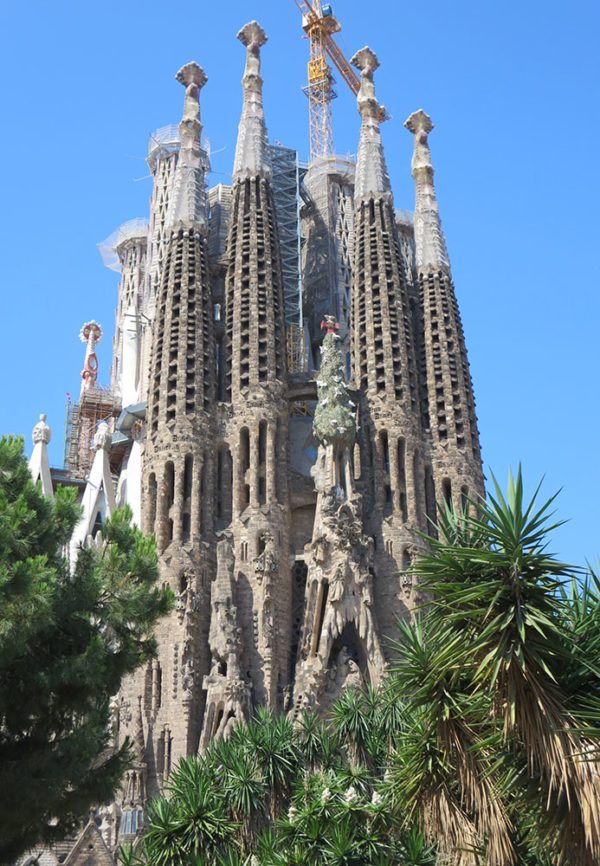 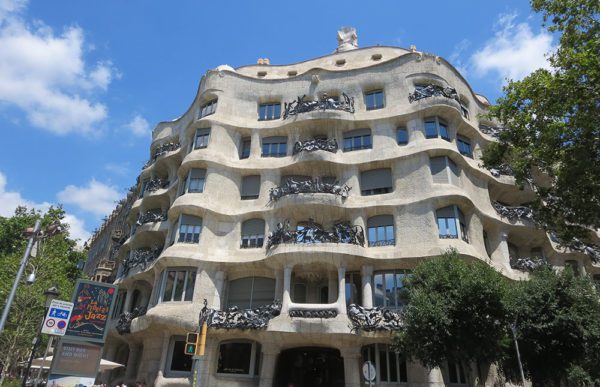 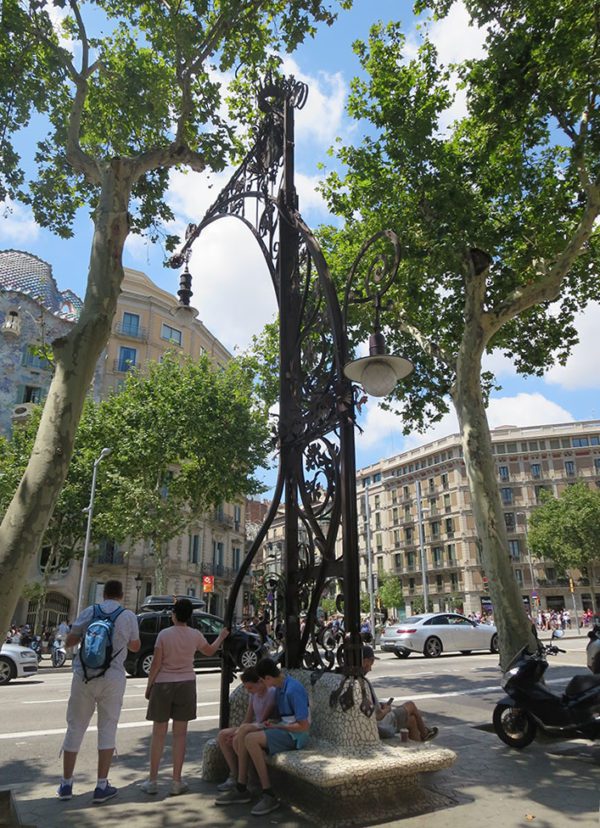 Seven works of Gaudi have collectively been given the status of World Heritage by UNESCO. They include Park Güell; Palace Güell; Casa Mila; Casa Vicens; the cathedral of La Sagrada Familia; Casa Batlló; and Crypt in Colonia Güell. We saw all seven, but our most enjoyable day was one spent exploring Park Güell, located on a hill overlooking the city of Barcelona and full of Gaudi’s creativity. Even some park benches were adorned with Gaudiesque mosaics and bore his artistic signature.

CHINA – A wall visible from the moon

On my way back to New Zealand, I stopped over in Beijing, where I spent a day in scorching sun walking around the Forbidden City and taking a daytrip to the Great Wall of China.

The Forbidden City in Beijing was built over a relatively short period of time from 1406 to 1420 and served for over 500 years as a winter residence for Chinese emperors from the Ming and Qing dynasties. As one of the largest and most well-preserved ancient wooden structures in the world, it was listed as a World Heritage Site in 1987. It took me all day to walk around it.

The Great Wall of China, on the northern border of the country, was the military defence project of successive Chinese empires. Its construction started in the 3rd century BC and continued to the 17th century AD. It follows the contour of the land and is wide enough for a bus to drive on top of it. “It embodies unparalleled significance as the national symbol for safeguarding the security of the country and its people.” (UNESCO, n.d.). With a total length of more than 20,000 kilometres, the Great Wall of China is the only man-made structure on Earth that is visible from the moon.

INDIA – A monument to love 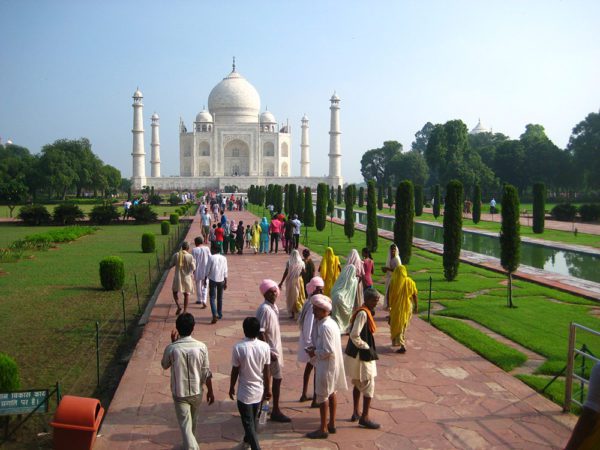 In 2013, I travelled to India with my Kiwi friend, Petrina. One of the highlights of our trip was visiting the world’s greatest monument to love – the Taj Mahal in the ancient city of Agra. Surrounded by elegant gardens, this immense palatial building of white marble was built between 1631 and 1648 by the emperor Shah Jahan as a mausoleum in memory of his wife, Mumtaz Mahal.

Taj Mahal is the jewel of Muslim art in India and a universally admired treasure. UNESCO describes it as “a masterpiece of architectural style in conception, treatment and execution which has unique aesthetic qualities in balance, symmetry and harmonious blending of various elements”. Beleaguered daily by huge colourful crowds of tourists from both India and overseas, it emanates peace, tranquillity, and exquisite beauty. 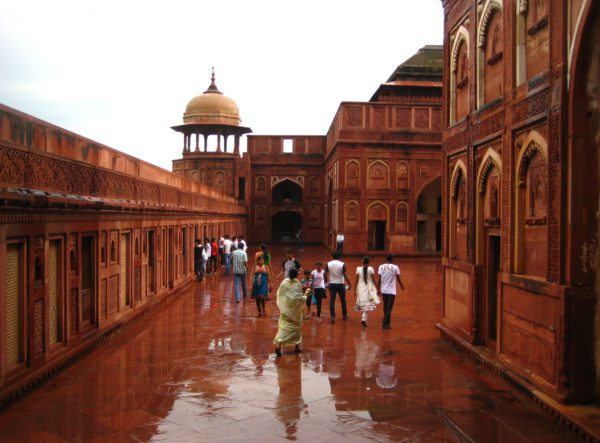 The Red Fort of Agra, the imperial walled city of the Mughal rulers, is comparable to Beijing’s Forbidden City, both in size and national importance. Built of red sandstone between 1556 and 1573, the fort was the main residence of the rulers of the Sikarwar clan, and later, the Mughal dynasty when Agra was the capital city of India.

PERU – An ancient city perched on a mountaintop

When my only son was getting married to lovely Micaela (Mica) from Uruguay, my partner and I took the opportunity to travel to South America. The wedding was in Mica’s hometown of Montevideo and we then joined the newlyweds on their honeymoon trip to Peru. In a matter of hours, we were elevated from sea level to 3,400m. One by one we gave in to altitude sickness. 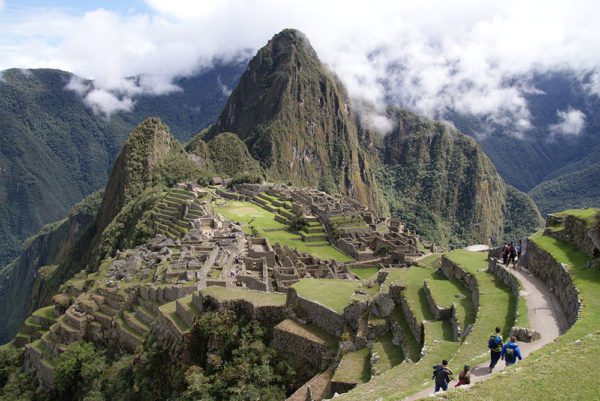 A few days later, acclimatised to the elevation, we took a train to Aguas Calientes, gateway to one of the Seven Wonders of the World – Machu Picchu. This 15th-century Inca citadel towering above the Urubamba River is a marvel of human daring, architectural perfection, and engineering master craft. Perched on a 2,430-metre-high mountain ridge, Machu Picchu defies gravity and fear. The surrounding cavalcades of mountains, with their near-vertical walls miraculously covered by dense vegetation, remind me of Fiordland.

In 1983, UNESCO designated Machu Picchu a World Heritage Site, describing it as “an absolute masterpiece of architecture and a unique testimony to the Inca civilization”.

It was here when the first Polynesian waka arrived more than six centuries ago and still largely unspoilt when Abel Tasman and James Cook claimed this land for European settlers in 1769.

New Zealand doesn’t have ancient castles, cathedral frescos, sculptures, or monuments. But this country in the Pacific has World Heritage status, too, although not of the man-made kind. Neither we nor our forefathers had to do anything to put it in place. No one suffered hardship or death during its construction. It’s not a monument to human creativity, perseverance, wealth, power, or genius – and it didn’t cost anything either.

We have something which the UNESCO World Heritage Committee considers as outstanding universal value.

It is Mother Nature’s gift to us, called Te Wahipounamu – in South West New Zealand. This 2.6 million-hectare area encompasses Westland Tai Poutini, Aoraki/Mount Cook, Mount Aspiring, and Fiordland national parks. Home to many endemic species, it contains rocks, plants, and animals that go back 80 million years to a time when New Zealand was part of the ancient Gondwanaland. Its spectacular fiords, lakes, and valleys are the finest examples of untouched natural landscapes stretching from mountains to sea.

Of the total 1,154 sites on the UNESCO World Heritage list, only 218 belong to the Natural category. What we have in Aotearoa is unique and irreplaceable.