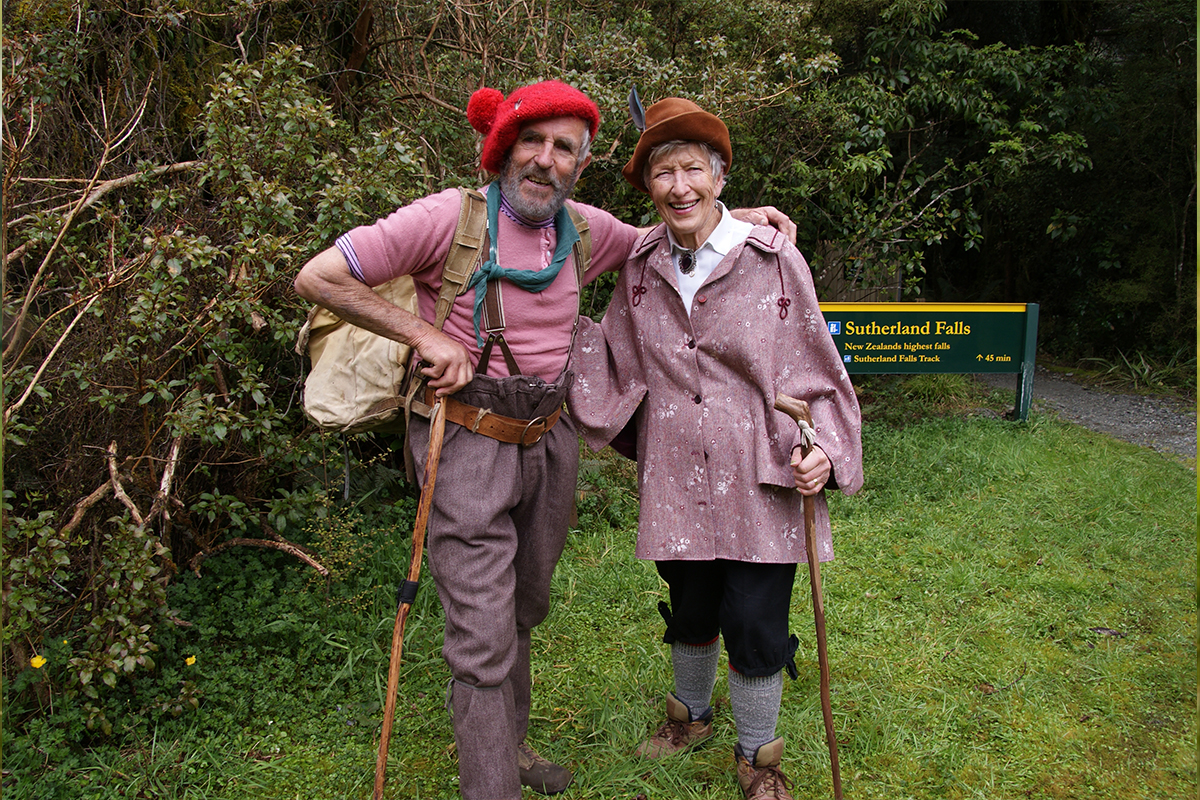 The Willetts : A story of an inspirational Fiordland couple

Helen and Ray Willett are a bit of a legend. Activists, environmentalists, eccentrics, party animals, tireless community movers, shakers, and supporters – these are just some of the words that spring to mind in relation to a couple whose association with Fiordland goes back more than half a century.

Ray, originally from London, came to New Zealand in 1953 aged 16, as a child migrant.

Ray’s earliest childhood memory is of hearing an ear-piercing siren announcing an air raid. He was 3 years old at the time.

“For the next six years, when the siren went off, we all went to a bomb shelter. At night mum would put the lights out and, in the distance, I saw a red glow. That was London

Helen and Ray Willett are a bit of a legend. Activists, environmentalists, eccentrics, party animals, tireless community movers, shakers, and supporters – these are just some of the words that spring to mind in relation to a couple whose association with Fiordland goes back more than half a century.

Ray, originally from London, came to New Zealand in 1953 aged 16, as a child migrant.

Ray’s earliest childhood memory is of hearing an ear-piercing siren announcing an air raid. He was 3 years old at the time.

“For the next six years, when the siren went off, we all went to a bomb shelter. At night mum would put the lights out and, in the distance, I saw a red glow. That was London burning,” he recalls.

At that time, the family lived in Harrow, Middlesex, England (now part of Greater London). Ray’s parents, Edward and Elisabeth Willett had three sons: Patrick, Ray and Chris. Before WWII, Ray’s father was a master craftsman working for Hoopers, the coachbuilders to Rolls Royce. During the war, he built Mosquito aircraft out of balsa wood for the British Airforce.

When the war ended, Ray completed elementary school and, following in his father’s footsteps, enrolled at a technical college. His heart wasn’t in it though, and he often skipped classes in favour of exploring London. He’d go to Hyde Park or the British Museum. On one of the truant days, he saw a sign in a window saying ‘Come to New Zealand’. He went in and picked up a form to fill out. At home, when he told his parents about his plans, they tried to persuade him to finish his apprenticeship first, but Ray said he wanted to be a farmer, and he wanted to go now.

“I waved goodbye to my family, never to see my parents again. I had no idea where New Zealand was, how far it was or what it was like,” he says. 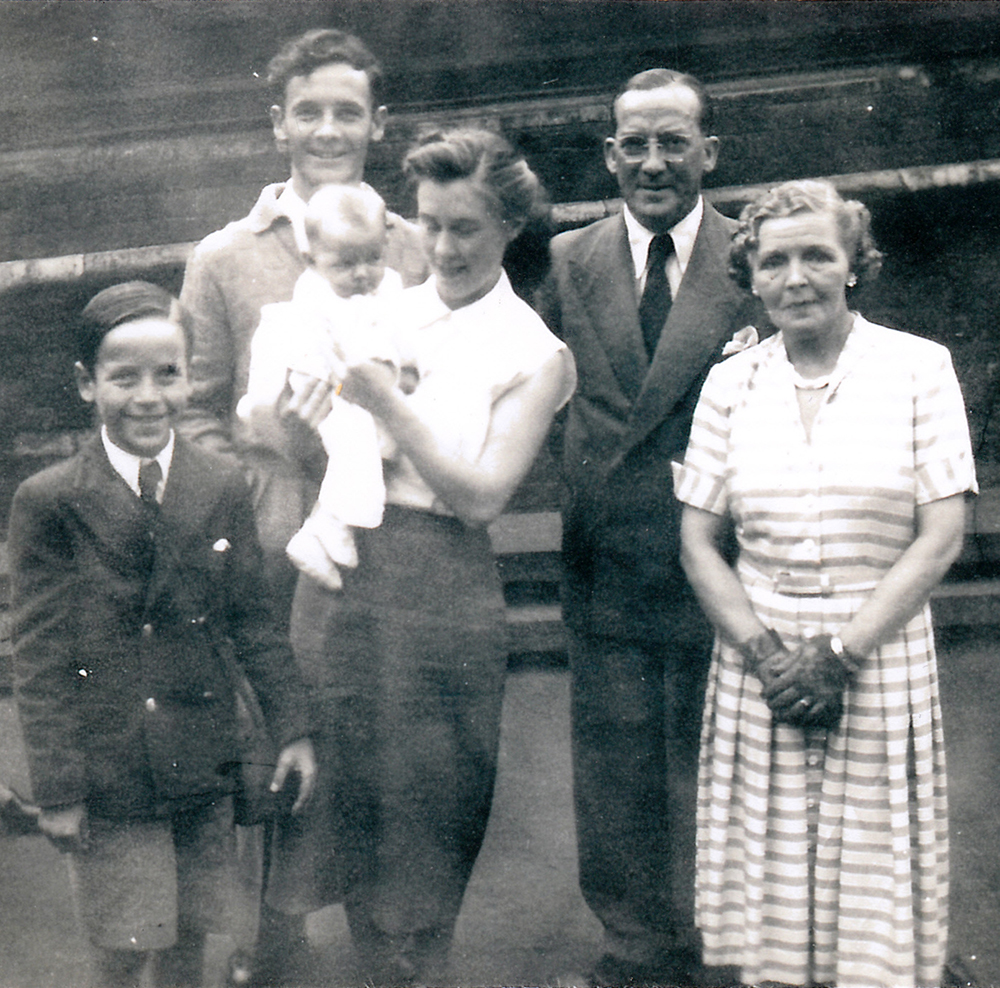 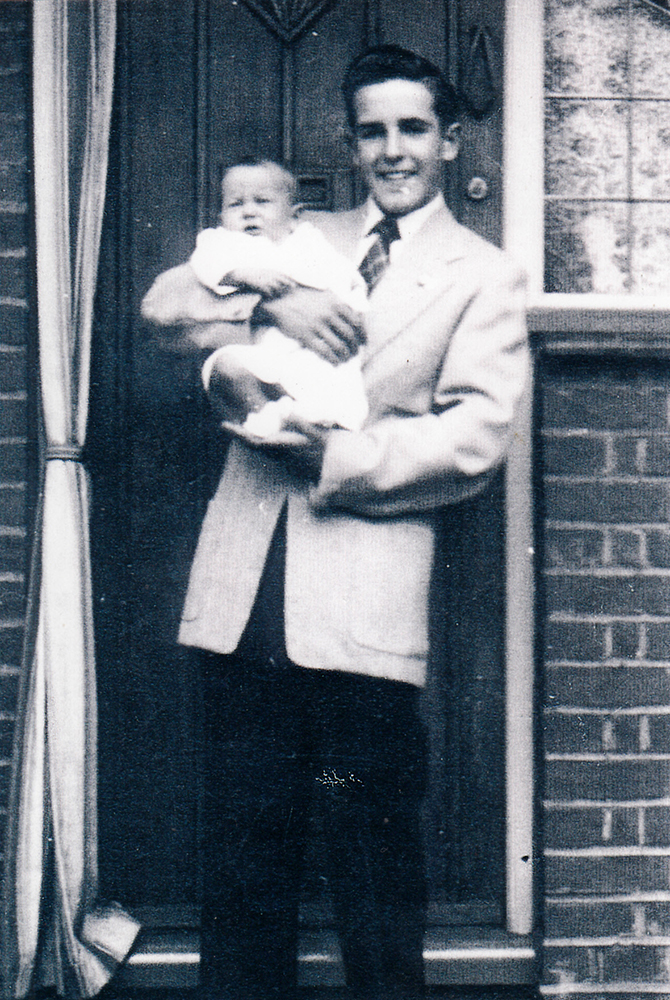 Ray Willett holding his niece on the day of his departure, London, 6 August 1953

He qualified under the child migrant scheme and joined a group of 15 youngsters escorted by Mr Bernard Esquilant on a voyage from London to Wellington aboard the ocean passenger liner RMS Rangitata. They arrived in New Zealand on 9 September 1953.

More than 130,000 children were sent to former British colonies from the 1920s to 1970s under the child migrant programme.

The children, aged between 3 and 14, predominantly English and almost invariably from deprived backgrounds, were taken from institutions and foster homes and sent out to the commonwealth countries. Most went to Australia and Canada, but between 1949 and 1953, 593 of those children were sent to New Zealand. Some of them lost contact with their families forever. Later research, beginning in the 1980s, exposed hardships and abuse of the relocated children.

Ray was one of the few with a happy story to tell. He was placed with Joe and Marl Burnside in Northland to help with milking cows. He fondly remembers his time with the Burnsides, saying he felt “he was part of the family”. 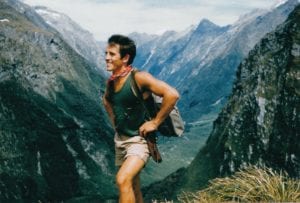 Ray Willett at Mackinnon Pass on the Milford Track with Clinton Valley below, 1958
Photo: Zygmunt Kepka

The young lad’s love affair with Fiordland started in 1956 when he embarked on a motorbike tour of New Zealand from Auckland to Milford Sound. He came back for the 1958-59 summer season to take on the job of a guide and track hand on the Milford Track for the Tourist Hotel Corporation (THC).

In 1961 while working at the Chateau on Mt Ruapehu ski field, Ray met an attractive blonde, Helen Shepherd.

Helen was born in Hastings and spent her youth in Hawke’s Bay. She qualified as a nurse and in 1958 went to London, where she worked in her profession for three years, before returning home. 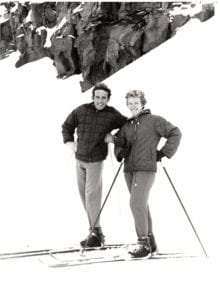 Freshly back from the UK, Helen got a job at the Ruapehu ski field cafeteria while Ray worked in the boot room. At the end of the winter season, they came to Te Anau to work on the Milford Track. Two years later, they were married. 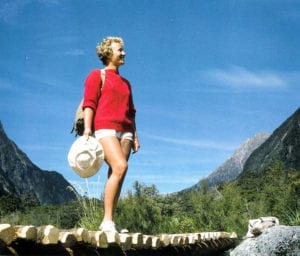 The Willetts managed the Pompolona Hut on the Milford Track during the summer of 1964-65, before THC asked them to run the Lake Waikaremōana motor camp for six months. Half a year turned into five and a half years in the Te Urewera National Park, but the grandeur of Fiordland lured them back for good in 1970.

As the first registered nurse in Te Anau, Helen was ‘snatched’ by the Fiordland Volunteer Ambulance Service, according to Ray, who also joined its ranks as an ambulance driver. Helen and Ray continued their involvement with the Ambulance for eight years. During that period, they became aware of the importance of donating blood, and not only became donors themselves but also encouraged others.

Another spinoff from the ambulance work for Helen was getting involved in victim support, which she continued for many years.

Asked for a reason why they have been such an unbeatable team in the service of the community Helen said: “It worked, because not having any children we could jump out of bed at 2am and attend to emergencies.”

But there’s more to the Willetts than blood, sweat and tears.

They are both fun-loving, extroverted individuals with colourful personalities, a quirky sense of humour, and zest for life many younger individuals might envy. Ray climbed Mitre Peak (1692m) in Milford Sound at the age of 76. A year later he completed an eight-day Outward Bound course and walked the full length of the Hump Ridge and Milford Tracks.

His incredible physical fitness is matched by his mental agility, which he claims to maintain by memorising and reciting poems – another skill for which he is world-famous in Te Anau. Meanwhile, Helen has her own method of keeping her brain active and only a few years ago attended Te Reo Māori language course run by the Southern Institute of Technology in Te Anau.

Neither Helen nor Ray shy away from dressing up for the occasion. Ray, who has competed in 25 of the annual Kepler Challenge mountain races, would bring humour to the event using props and costumes. Helen deserves a champion title for volunteering for the 26 consecutive Kepler Challenges starting at the event’s inception in 1988. A marathon runner in her younger years, Helen’s only regret is that she has never run the Kepler herself. 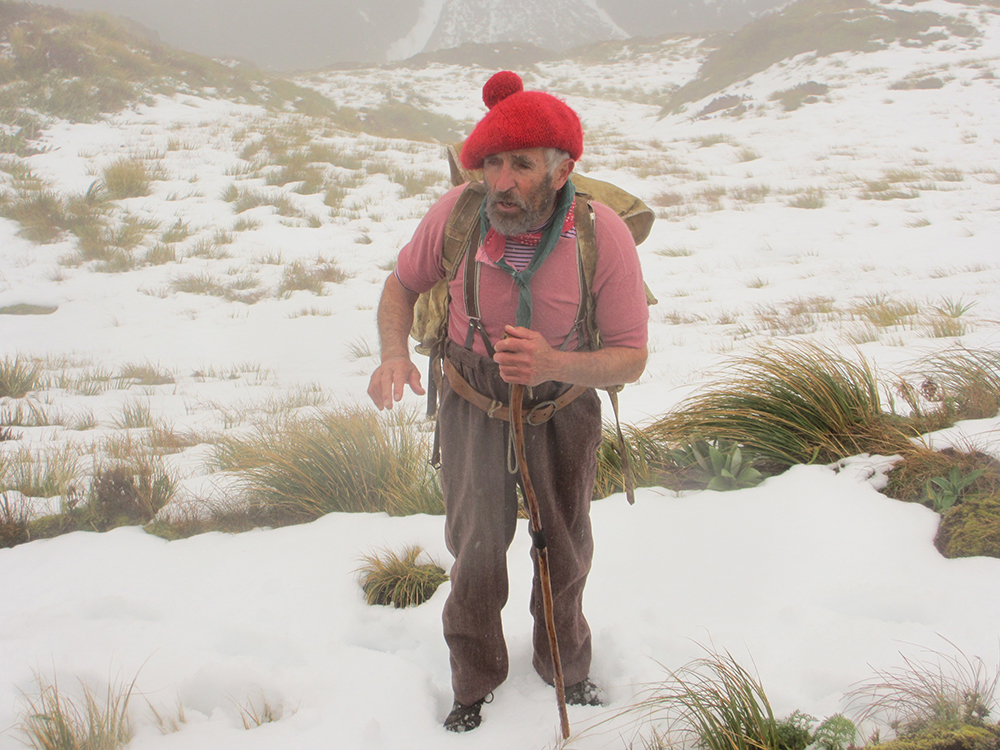 In 1990 Ray Willett was named Fiordland Tourist Personality of the Year which acknowledged his part in playing Te Anau’s first European settler, Richard Henry during the town’s centenary in 1983. He continued his theatrics by playing explorer Quintin Mackinnon during the Milford Track centenary celebrations in 1988 and again in 1989. No doubt Ray’s long time involvement with Fiordland Players, the local theatrical society, helped him to play these roles convincingly. He put on Mackinnon’s trademark suspenders and red beret once again for the celebrations of the 125thanniversary of Milford Track discovery, while his wife wore a matching period costume.

The Willetts were both involved in the Save Manapouri campaign back in 1959-72 to prevent the raising of the levels of lakes Manapouri and Te Anau as part of the construction of the Manapouri Power Station. More recently they supported the Save Fiordland battle against the tunnel and the monorail proposals to shorten the trip from Queenstown to Milford.

Passionate about the environment, Ray has been involved with conservation since 1959 when he came to Fiordland to work on the Milford Track as a mountain guide. This is when he saw his first stoat and learned about their impact on New Zealand native birds.

Later as a National Park Ranger, he set up predator trap lines at Eglinton and Hollyford Valleys and continued trapping when he worked for the Takaro Lodge near Te Anau.

When in 2007, the Kepler Challenge Committee set up a 50km-long predator trap line on the Kepler Track and called for volunteers, Ray put up his hand to check 50 traps along the 10km section of the track. And he’s been doing it once a week ever since.

“Others have said they were doing it for the exercise. I say I don’t need the exercise; I’m doing it to save the birds,” he says .

With all this work it’s no surprise that in 2008, Ray received the conservation champion title at the Department of Conservation annual awards for his extensive contribution to various conservation initiatives in Te Anau and Fiordland areas.

Five years ago, at the age of 80, Ray once again proved that age is no limit when it comes to outdoor pursuits. He participated in a 15-hour epic caving journey that took him and five others down New Zealand’s deepest vertical shaft called Harwood Hole, and further through Starlight Cave. The long rope descent is considered one of the most spectacular caving experiences in New Zealand.

Today at 85, Ray is still an active member of the Fiordland Tramping and Outdoor Recreation Tramping Club.

While Helen prefers to stay out of the limelight, Ray does not mind putting himself out there for a good cause. Being blessed with a natural ‘gift of the gab’ has landed him many MC roles and speaking engagements at dinners, meetings, conferences and as part of the DOC’s Summer Programme.

Using his trusted Aldis slide projector his wife Helen brought from England in 1961, Ray keeps audiences spellbound with tales of men and horses carrying inhumane loads up the Milford Track before motorised vehicles and helicopters took over those arduous jobs. What comes across loud and clear from Ray’s talks is his infectious love for the mountains and rivers of Fiordland and his appreciation of everything this amazing region has to offer.