The reign of a plastic bag

New Zealand may be perceived as clean and green by the rest of the world, but we do produce a staggering amount of rubbish.

“When we look down at the Earth from space, we see this amazing, indescribably beautiful planet. It looks like a living, breathing organism. But at the same time, it looks extremely fragile,” astronaut Ron Garan said.

Ten years ago, while walking in central Christchurch, I came across a free outdoor photographic exhibition about the impact of humankind on Planet Earth. Mounted on display panels the size of a school whiteboard were beautiful and powerful images showing the fragility of Earth’s varied landscapes.

New Zealand may be perceived as clean and green by the rest of the world, but we do produce a staggering amount of rubbish.

“When we look down at the Earth from space, we see this amazing, indescribably beautiful planet. It looks like a living, breathing organism. But at the same time, it looks extremely fragile,” astronaut Ron Garan said.

Ten years ago, while walking in central Christchurch, I came across a free outdoor photographic exhibition about the impact of humankind on Planet Earth. Mounted on display panels the size of a school whiteboard were beautiful and powerful images showing the fragility of Earth’s varied landscapes.

One of the panels, in particular, struck a chord within me. It showed a smoking dumpsite with a small silhouette of a person standing on top of a mountain of rubbish. But it wasn’t so much the image as its caption that really shocked me and made me want to take action. It said: “New Zealanders use over 22 million plastic bags a week – each takes more than 500 years to break down.” The population of New Zealand at that time was just over 4.3 million. So that’s five bags for everyone, from a newborn baby to the oldest citizen of Aotearoa.

People have known about the plastic bag problem for years, yet hardly anyone did anything about it. It seems we’ve been burying our heads in the sand to avoid the issue.

“What could I do?” I wondered. I recognised that while I may not be able to influence hundreds of people to commit to plastic-free living, I could control my own actions and lower my personal plastic consumption.

Taking to heart the mantra “refuse, reuse, recycle”, I decided to gradually eliminate plastics from my life, starting with single-use supermarket bags. But learning a new habit can be harder than one thinks. Although I acquired a few reusable cloth bags, I frequently forgot to take them with me into the supermarket. That is until I made myself walk back to the car to get them, even if I was halfway through my shopping. I only had to do this twice for the new habit to set in for good.

But shopping bags are only a fraction of the problem. There are bags to weigh fruit and vegetables, Ziplock bags for nuts and sweets, plastic trays and Glad Wrap to store meat and fish. Just about everything these days comes in plastic packaging – from milk, juices, soft drinks, oil and vinegar, to yoghurt, cheese, bread, pasta, rice, fish and meat, to frozen goods, toys, cleaning products and cosmetics.

I reuse Ziplocks and the thin vegetable bags until they die. When they get dirty, I wash them and put them on the clothesline to dry. I banned Glad Wrap from my kitchen, opting for a much nicer beeswax cloth to cover food. Whenever possible, I also try to buy food in bulk. Unfortunately, living in a small town sometimes limits your possibilities. So when I visit a bigger city, I seek out places such as The Pantry in Invercargill, Bin Inn in Dunedin, the Liberty Market or Piko Wholefoods store in Christchurch, where you can fill your own containers from large bins.

On the other hand, living in a small village where population density is low can give people opportunities to grow their own food compared to those living in apartment blocks, terraced housing or in houses on small sections. This way, one virtually eliminates the need for packaging altogether.

It’s strange how sometimes doing the right thing can feel wrong. I often wondered if I was over the top when I washed my plastic bags and hung them out to dry, until one day I saw some drying on a clothesline at a friend’s place. I quietly rejoiced in the knowledge that I wasn’t the only person crazy enough to do this. Similarly, I feel odd when I pick up someone else’s rubbish on a walk. But when I see other people do this, it justifies my actions and makes me feel ‘normal’.

Plastic waste makes up a large proportion of the debris collected on New Zealand beaches, with single-use plastics such as food wrappers and bags being the largest culprits. Most of the plastic in the ocean originates on land and is carried to the estuaries and coasts by rivers.

As well as soft plastics, humanity produces staggering amounts of the hard plastics that make up a lot of household items and office equipment. Have you ever purchased a gadget that broke a day or two after its warranty expired? It’s called ‘planned obsolescence’ – “a policy of producing consumer goods that rapidly become obsolete and so require replacing, achieved by frequent changes in design, termination of the supply of spare parts, and the use of non-durable materials” (Google Dictionary). Products such as hairdryers, mixers, blenders, electric drills, cellphones, personal computers and many others are deliberately designed to last only as long as their warranty period to then be superseded by new, ‘better’ models. In addition, these items are priced so that it’s cheaper to buy a new gadget than to repair the broken one, which ends up in a landfill. These items take even longer to decompose than plastic bags.

Common sights in New Zealand countryside include colourful rows of bailage – a type of animal fodder made from green foliage crops which have been preserved by fermentation (Wikipedia).

One way to make silage is to place the greens in large heaps on the ground, roll by tractor to push out the air, then cover with plastic sheets held down by used tyres. In recent years an alternative method has become more common: the cut vegetation is shaped into large bales, wrapped tightly in plastic to exclude air. This method is easier for farmers to feed out in winter but requires far more plastic.

Plastic sheeting used for sealing pit or baled silage needs proper disposal, and recycling schemes in some areas work well. To avoid the cost of recycling, however, some farmers burn silage wrapping, releasing plastic pollution into the air. Odour and smoke concerns have led some communities to restrict that practice.

Many countries, including the world’s richest nations, dump plastic garbage directly into the sea. There it drifts on ocean currents creating huge islands of plastic rubbish. One of the better known of those is the Great Pacific Garbage Patch, halfway between Hawaii and California. In March 2018, American Newsweek magazine reported that “scientists studying this ocean trashcan have discovered it contains at least 79,000 tons of plastic (…) and stretches across an area twice the size of Texas”. In November 2017, a similar floating plastic trash ‘island’ was discovered in the Caribbean Sea off the coast of Honduras. And in May 2019, Newsweek published an article about “a floating ‘island’ of plastic waste, measuring several dozen miles long in between the French island of Corsica and the Italian island of Elba” in the Mediterranean Sea.

The good news is that The Ocean Cleanup CEO, Boyan Slat (27) and his team of engineers are developing systems that can clean up floating plastics caught swirling in the ocean. On August 10 2021, their first large-scale system, “Jenny” (800 m length), was deployed in the Great Pacific Garbage Patch as the first of more than 70 tests planned for the next six weeks (www.theoceancleanup.com). 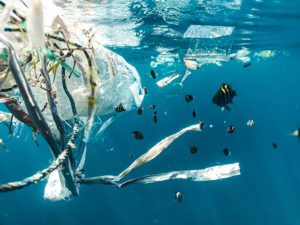 While some forms of plastic pollution are easy to see, there is also a less visible problem affecting our marine life. Nearly all plastics are made out of tiny, lentil-sized pre-production plastic pellets. These are commonly found on beaches, posing a serious threat to marine life; their effects are devastating. Plastic pellets are easily mistaken for food by seabirds, fish, and other wildlife because they resemble fish eggs. When ingested, they compromise the animal’s fertility and health, and can lead to a false feeling of fullness which causes animals to stop eating real food and starve. Concentrations of these contaminants increase up the food chain and are potentially damaging to human health when we eat affected seafood.

The next level down in size are microplastics. Although a plastic bag can take 500 years to fully decompose, its mechanical, chemical, and biological degradation exacerbated by UV radiation, breaks it down into tiny particles referred to as microplastics. These tiny particles have made their way to our soils, water, and air, and concerns are growing about the quantities we consume by eating, drinking, and breathing.

It’s been ten years since I saw that environmental photo exhibition. In 2019, the New Zealand government introduced a ban on single-use plastic bags. When announcing the bill, Minister of the Environment Eugenie Sage said that “for too long New Zealand had been sending its waste offshore and the refusal by China and others to take this country’s waste was a wake-up call”. She also acknowledged that the bill was not going far enough and that it was just the start of a conversation (RNZ, 2019).

In 2020, Covid-19 shifted the focus of New Zealand and the rest of the world away from plastic pollution. The pandemic itself, while helping to reduce air pollution through decreased numbers of international and national flights, has contributed to increased worldwide consumption of plastics in the form of PPEs and vaccine packaging.

Overconsumption, overexploitation, pollution, deforestation, climate change, and now Covid-19 all contribute to that fragility and provide a sense of unease about where we are headed.

Whether we bury it, burn it, or just let it find its way to the oceans via our waterways, plastic pollution remains one of the most important environmental and health problems we face today. Other than stop producing it, there’s no easy answer. We have all contributed to the damage – mostly unknowingly – and it’s up to us, through the choices we make, to halt the reign of the plastic bag et al and ultimately end plastic pollution.