The 21st of June will mark this year’s Southern Hemisphere winter solstice when the shortest day of the year is followed by the longest night. On that day in Invercargill - New Zealand’s southernmost city - the sun will rise at 8.30am and set at 5.05pm, (Invercargill, 2021).

The word solstice comes from the Latin sōlstitium, literally: the (apparent) standing still of the sun, from sōl meaning sun and stitium – standing still (Solstice, 1986).

According to Wikipedia, “the winter solstice, hiemal solstice or hibernal solstice occurs when one of the Earth's poles has its maximum tilt away from the Sun. It happens twice yearly, once in each hemisphere. It’s the day when the Sun is at its lowest daily maximum elevation in the sky. Its opposite is the summer solstice with the longest day and the shortest night of the year”.

The 21st of June will mark this year’s Southern Hemisphere winter solstice when the shortest day of the year is followed by the longest night. On that day in Invercargill – New Zealand’s southernmost city – the sun will rise at 8.30am and set at 5.05pm, (Invercargill, 2021).

The word solstice comes from the Latin sōlstitium, literally: the (apparent) standing still of the sun, from sōl meaning sun and stitium – standing still (Solstice, 1986).

According to Wikipedia, “the winter solstice, hiemal solstice or hibernal solstice occurs when one of the Earth’s poles has its maximum tilt away from the Sun. It happens twice yearly, once in each hemisphere. It’s the day when the Sun is at its lowest daily maximum elevation in the sky. Its opposite is the summer solstice with the longest day and the shortest night of the year”.

The difference between the length of the day and night is greater the further away a country is from the equator. Here are some examples: 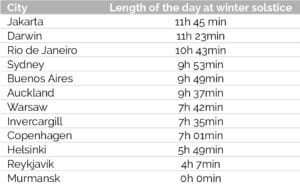 At the equator, the difference in the length of the day around the winter and summer solstice is hardly noticeable. At the pole and within the polar circles, there is continuous darkness or twilight around the winter solstice. This occurs in June at the South Pole, and in December at the North Pole. Countries within the Arctic Circle, including northern Russia, Greenland, northern Canada, Alaska, and Scandinavia, experience a perpetual night that lasts for several weeks, as does Antarctica in the southern hemisphere.

Many cultures celebrate winter solstice. The ebbing of the daylight gives people hope that the hardest time is over, and that they are now moving towards spring and longer days. Some traditions go back to our forefathers worshipping the sun as the ultimate source of light and warmth on Earth, without which life wouldn’t exist.

Slavic people celebrated winter solstice (December 22nd) and the entire period around it, known as Koliada. These festivities which marked the beginning of the new solar year would last up to 12 days.

The word koliada, or a variation of it, is used in many Eastern European languages to refer to celebrations held around the winter solstice in honour of the sun. In modern Polish language kolęda is derived from ‘koło’ or wheel – much like the word ‘Yule’ is an Anglo-Saxon word for wheel. In the English language, Yuletide refers to the Christmas season and is used even in contemporary Christmas songs, (Koliada, n.d.).

In pagan Poland the winter solstice rites were filled with merriment. Processions of carollers dressed as animals and wearing costumes roamed the village walking from door to door, singing humorous songs (kolędy/carols) in exchange for gifts, usually food. One of the carollers would carry a spinning solar symbol lit from within by a candle. Often they were accompanied by a Turoń, a man covered with a blanket or a sheep skin carrying a hand-made goat’s head placed on a stick, who performed pranks and dances, and jumped and roared like a donkey. This man-goat symbolised virility and fertility, (Turoń, n.d.).

For centuries, the Church fought against the Slavic pagan folk traditions. Yet, despite this struggle, Slavs persistently preserved the key Koliada rites, and faithfully enacted them every year on the longest and toughest night of them all.

The church representatives decided that ‘if you can’t beat them, join them’. Today in Poland and other Slavic countries, a Catholic priest leads a group of carollers, who continue their pagan practices in a slightly modified form. The spinning sun became a star and the carols acquired religious meaning. Also, the characters of an angel and a devil were added to the priest’s entourage.

Yule or Yuletide is a festival historically observed by the Germanic peoples, living in lands that include today’s England, Germany, Holland, and the Scandinavian countries. Scholars have connected the original celebrations of Yule to the Wild Hunt, the god Odin, and the pagan Anglo-Saxon Mōdraniht. The events of Yule were generally centred on midwinter, with feasting, drinking, and sacrifice, (Yule, n.d.).

Later departing from its pagan roots, Yule underwent Christian reformulation. Some present-day Christmas customs and traditions such as the Yule log, Yule goat, Yule boar, Yule singing, and others may have connections to older pagan Yule traditions.

The custom of burning the Yule log (or glog) dates back to earlier solstice celebrations and the tradition of bonfires. A specially selected log would be burnt over several days, its light and warmth symbolising the sun. Its ashes were scattered on the fields or in the garden to ensure soil fertility for the coming season. Sometimes the ashes were placed under the bed for good luck, (Yule log, n.d.).

The Yule goat’s origins go back to ancient pagan festivals. While a popular theory is that the celebration of the goat is connected to worship of the Norse god Thor (son of Odin) – associated with strength, storms, hallowing and fertility, who rode the sky in a chariot drawn by two goats, the tradition goes back to common Indo-European beliefs. This links to ancient proto-Slavic beliefs where the Koliada (Yule) festival honours the god of the sun and the harvest, and explains why the Koliada festivals always have a person dressed as a goat, (Yule goat, n.d.).

Scandinavian countries observe St. Lucia’s Day, which has its roots in earlier centuries, when the Norse celebrated winter solstice with large bonfires meant to scare off evil spirits during the longest night. After converting to Christianity, the Norse incorporated the legend of St. Lucia, a Christian martyr, into their celebration. Today, young girls in Scandinavian towns and villages vie to play Saint Lucia on St Lucia’s Day. Dressed in white gowns with red sashes and wearing lighted wreaths on their heads, they lead a procession of children dressed in white costumes singing traditional songs. The festival marks the beginning of the Christmas season in Scandinavia, and is meant to bring hope and light during the darkest time of the year, (St. Lucia’s Day, n.d.).

Ancient cultures also built some of their greatest architecture to align with solstices.

The Incas worshipped the sun and believed themselves descendants of the sun. In the 15th century Temple of the Sun at Machu Picchu in Peru, they built a window through which (on the winter solstice) the sun would shine and light a specific spot carved on a sacred rock. A similar window is found in Peru’s Temple of the Sun in Cuzco, now the site of Santo Domingo Church, built by the Spanish on Inca stonework foundations. Cuzco celebrates winter solstice with Inti Raymi, meaning Festival of the Sun, a traditional religious ceremony of the Inca Empire in honour of the god Inti (Quechua for sun). Celebrations held on the 24th of June involve music, colourful costumes, and sharing of food, (Gardiner, 2018).

Stonehenge Aotearoa is the New Zealand version — situated in the Wairarapa countryside. It aims to teach about astronomy, including Babylonian, Celtic, Māori and Polynesian star lore.

In New Zealand, the winter solstice brings with it the rise of the Matariki star cluster, known to astronomers as Pleiades or the Seven Sisters and marking the beginning of the Māori New Year. Formed more than 100 million years ago, the cluster plays a pivotal role in ancient and modern Māori mythology.

Matariki celebrations take place in mid-winter from late May or early June (the dates vary according to tribes and geography) as the stars reappear in the sky just before dawn throughout winter and early spring. This year, Matariki will be on Friday, the 2nd of July.

For Māori, the arrival of Matariki signals a seasonal ending and a beginning. It gives people the chance to connect with their whānau (family) to reminisce and reflect on the year that has passed and rejoice and rejuvenate for the new year that lies ahead.

As in many cultures, food plays an integral role in the rituals and life of Māori. Traditionally, Māori believed Papatūānuku (Mother Earth) was the giver of life. From the earth came food and so Matariki was a time of ceremonial offering to the Māori land gods, Rongo and Uenuku in the hope of a bountiful harvest in the year to come. The Māori celebrate Matariki with kai (food) often cooked in a hangi (earth oven) and shared with whānau and friends, (Meredith, 2006).

Uplifting the food from the hangi.
Photo: Alina Suchanski

Since the beginning of the 21st century, there has been a revival of Matariki. Initially seen as an opportunity to help revive the Māori language, the event continues to rise in popularity. The first modern day Matariki celebrations took place in year 2000. Around 500 people attended that first festival. Today thousands of people, both Māori and Pākehā (New Zealanders of European descent) celebrate this winter festival.

In recent years, some New Zealanders started a tradition of celebrating Christmas around the time of the winter solstice. Mid-winter Christmas dinners have become popular in Aotearoa, as colder weather tends to be more conducive to having a feast of hot dishes customarily prepared at Christmas.

In the 21st century, the age of super computers, artificial intelligence, smart phones and smart homes, people all over the world still find comfort in following ancient traditions that originate in times when the sun and fire were the only sources of heat, while singing and dancing were the only forms of entertainment available.

Celebrating winter solstice is one tradition that allows us to continue our connection with the past, and live a little in the ancient shoes of our forebears.