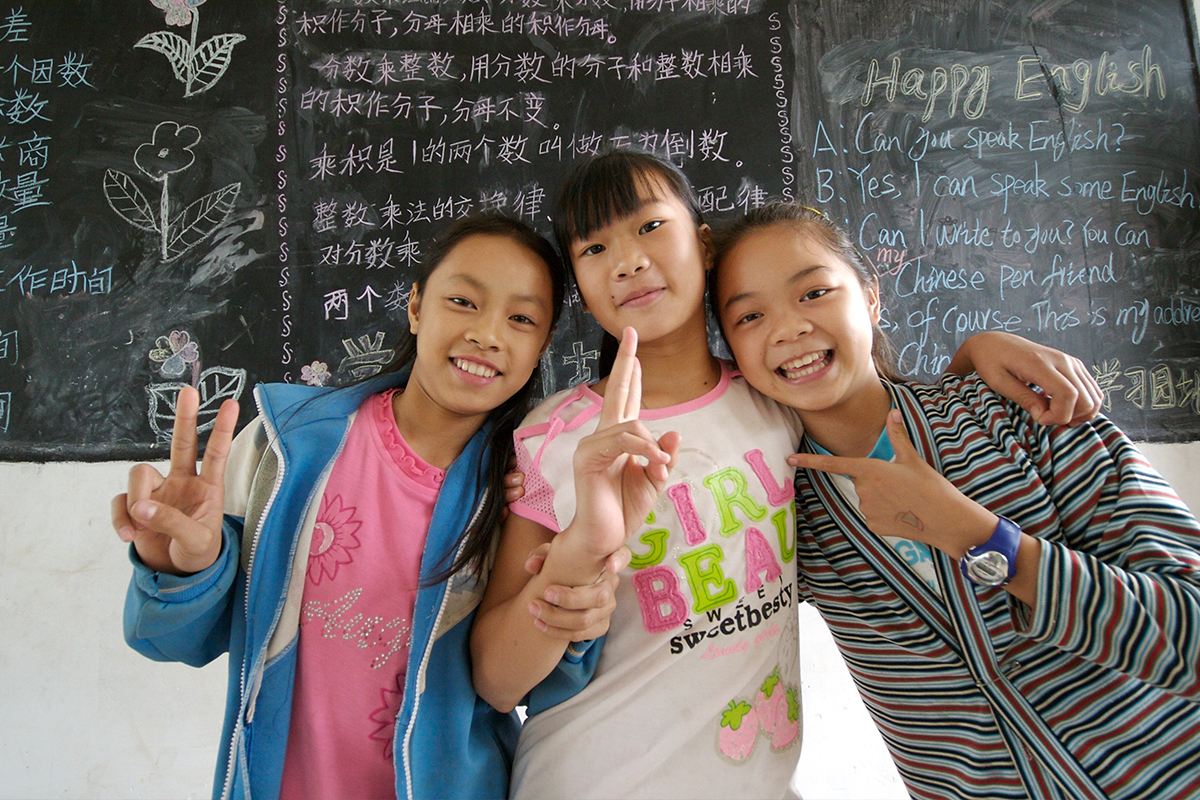 Teaching English as a Second Language: Not For Everyone

It’s a Saturday morning, a little after eight o’clock. I’m standing at the front of a small, airless classroom, and there are fourteen sleepy little faces staring at me. Behind them, fourteen pairs of parents, also staring, but much more alert. Some are poised with pens and paper, ready to record whatever wisdom this pale-haired stranger is about to impart to their offspring.

The room is stuffy. The windows don’t open, so the air is ripe with morning breath and savoury pancakes (hasty breakfasts from the street stall below) and, well, the smell of my own fear.

It’s a Saturday morning, a little after eight o’clock. I’m standing at the front of a small, airless classroom, and there are fourteen sleepy little faces staring at me. Behind them, fourteen pairs of parents, also staring, but much more alert. Some are poised with pens and paper, ready to record whatever wisdom this pale-haired stranger is about to impart to their offspring.

The room is stuffy. The windows don’t open, so the air is ripe with morning breath and savoury pancakes (hasty breakfasts from the street stall below) and, well, the smell of my own fear.

By 7pm, I will have experienced this scenario six times over, teaching every age group from new entrants (three to five years old), middle school (six to ten years), to adults.

On Sunday, I’ll do it all over again.

It was 2011, and I was one of four foreign teachers (FTs) hired to teach at a private English school in Hohhot, northern China. It was my first ‘official’ teaching job. It was also my last.

Teaching ESL: The passport to the world

Proficiency in English is one of the most sought-after skills in the world. English is the fastest-spreading language in history, with some 1.75 billion people speaking it at a ‘useful’ level. In China, learning the English language is mandatory in schools from grade three, and businesses are more likely to hire someone with fluency. More to the point: English is now the global language of business, used by many of the biggest multinational companies in the world.

Back in the early 2000s, the demand for ESL teachers was at an all-time high. Unsurprisingly, so too were online courses for TESL or TEFL certification. Like many other restless 20-somethings, I saw becoming an English teacher as a near-perfect solution: I’d be travelling the world and getting paid to do something I did every day anyway: speak English.

Bored with my job as a journalist at a small-town newspaper, I diligently slogged my way through an online TEFL course. The course culminated in a two-day workshop in central Auckland, after which we were handed our certificates and wished the best of luck on our teaching journeys.

Suspecting I wasn’t quite ready to lead kids and adults through the nuances of the English language, I decided to start out volunteering. Back in ‘those days’, people were still using travel forums to share information, and it was at one such forum I found out about Educational Support Tibet.

ES Tibet was set up by a charitable foundation based in Switzerland for Tibetan refugees. The school is a single building lodged in the middle of the rural Kangra district, Himachal Pradesh. It takes in about 20 young Tibetans every year, aged 18-33, all of whom had made the perilous journey across the Himalayas into India just months or years before. The school relies on volunteers to teach Cambridge University English to its students, who are both provided with full board and accommodation. But the school’s remote location and lack of publicity meant that teachers were few and far between.

The prospect of ‘doing something good’ while also living within a stone’s throw of the Himalayas (and the Dalai Lama’s temple) was impossible to turn down. I quit my job as a journalist and booked a ticket to India.

The battered stucco building was surrounded by farmlands, about a twenty-minute walk from the nearest village. I was given a tiny brick shack to sleep in and a ramshackle teaching schedule, and not much else. There were a few other teachers who came and went; some for several weeks or months, some for mere days.

I spent six weeks at EST as my visa was only for three months and I wanted to travel around India. I wasn’t an excellent teacher by any means, but I became friends with many of my students, who were around my age. I did manage to help them write some deeply moving essays; accounts of the home life they missed, their experiences in escaping Tibet, and their hopes for the future. I would later meet many foreign teachers who were born in Spain, Greece, or Russia who spoke thickly-accented English but were teaching full-time at language schools.

Back then, the legalities of China’s ESL market had a few grey areas, and many ESL teaching platforms based in China were left to create their own hiring policy. For most positions, the criteria were minimal: a bachelor’s degree (in any field), a TEFL certification, and some teaching experience (desirable, but not always necessary). Oh, and you should speak English.

Upon returning to New Zealand and finding myself without a job, it was very easy to forget that I didn’t actually enjoy teaching. I just wanted to travel. And now that I had ‘experience’, the opportunities were endless.

In the eyes of most language institutions, I was more than suitable. Within weeks, I was offered roles in China, Japan, Indonesia, Vietnam, and even Spain.  And that’s how I ended up in Inner Mongolia.

Teaching English in China: then and now

Chinese parents have long yearned to provide their children with the best education money can buy. Ten years ago, when I was nervously packing my bags for my first paid teaching job, about one-fifth of China’s colossal population was studying English: some 400 million. Today, the English learning market in China is estimated to be worth about $4.5 billion dollars.

The contract I’d accepted was at a private language school in Hohhot, in the south central part of Inner Mongolia. The job sounded manageable enough: 25 hours a week, weekends only, with some ‘fun’ classes on weekday evenings. In return, I would be paid $6,000RMB a month (about $NZD1,300) along with an apartment. I chose the six-month contract to ‘test the waters’. How hard could six months be?

As it turned out, quite hard.

Saturday and Sunday began at 8am and finished at 7pm. Classes were one or two hours each, back-to-back, with a two-hour break for lunch in the middle of the day. Each class was led by an FT (foreign teacher) and assisted by a CT (Chinese teacher). A few battered textbooks were provided, which gave a vague outline for each lesson. Otherwise, we were entrusted with leading the classes as we saw fit.

Three nights a week, the school hosted an extra-curricular English Corner session: 40 minutes of games that made learning English ‘fun’. Things started out well enough. Once I got over my stage fright of being scrutinized by the parents, I was able to lead my kindergarten classes through the rigmarole of ‘C is for CAT’ and ‘D is for DRAGON’. I lost my voice in the first week.

Teaching older children was much more difficult. The kids were often tired, bored, and thoroughly uninterested: it was their weekend, after all. The classrooms were hot and uncomfortable. Above all, they could sense what I should have admitted to myself long before accepting the contract: I was not cut out to be a teacher.

Those six months were the longest and toughest of my life. It wasn’t all bad: I eventually won the adoration of at least one class: my grade fives, who were delightfully enthusiastic about their teacher ‘Katie-meow’.

The rest was, well, fairly terrible. My scheduled hours crept up every week. An extra class here, a double-up on English Corner there, a private tutorial squeezed in between. Suddenly, I was teaching every day of the week, with barely enough time to prepare lesson plans, and no change to my salary. I later met other ESL teachers who had similar experiences at their own schools.

About two months into my contract, the parents of my kindergarten class complained to the school’s manager that they didn’t like my New Zealand accent. That it was bad for their children. My pronunciation of ‘pen’ and ‘bed’ was all wrong, and they wanted an American teacher, please. My manager was unable to find a replacement, so instead ordered me to sound more American. The parents eventually (and huffily) resigned themselves to my pseudo-accent.

When my six months were up, I was quite certain I would never teach again. And I never have.

And, fortunately for future generations of Chinese students, the criteria for obtaining work as an English language teacher in China is now much more strict. Towards the end of 2018, the Ministry of Education in China decided to address growing concerns about poor-quality training programs by tightening regulations.

Now, to teach in China, teachers must be from one of seven approved countries: the UK, Ireland, US, Canada, Australia, New Zealand, or South Africa. These are the countries deemed to speak English fluently and therefore most suitable for teaching their students. Teachers must have proof of at least 120 hours actual teaching in addition to their qualifications and undergo a criminal background check. Online language platforms must also publish the qualifications of all foreign teachers, including access to teachers’ names, photo, teaching qualifications, as well as previous academic and professional experience.

The rise of online ESL – and better teachers

Teaching English in any country is indeed a rewarding and highly-respected career. It’s also quite lucrative if you have the right qualifications. In countries like China, Japan, and Vietnam, you must be able to demonstrate that you can, in fact, teach: which should mean that the jobs are going to those who are adequately skilled, rather than wanderlusters (like myself).

Today, China is still the world’s largest market for English language study. While the demand for ESL teachers in Japan, Korea, and Taiwan have slowed somewhat, China’s market continues to skyrocket – especially online. According to Xinhua.net, around 8 million people in China are now learning English virtually, with many ESL teachers teaching from their own homes. And, with the new requirement for online teachers to have the same qualifications as those who physically teach in schools in China, the quality has certainly improved.

I won’t ever go back to ESL myself. I am simply not a teacher. I can only take some solace in the fact that my one-off effort in instructing those bored young students was fleeting enough to have not caused any harm. And they are hopefully not, as their parents feared, writing with a ‘pin’.