Tango – dance of passion, melancholy, and mindfulness in motion

“Tango can be debated, and we have debates over it, but it still encloses, as does all that which is truthful, a secret.”

One body, four legs – not a freakish Frankenstein creation but a definition of tango at its purest. An image to capture the intimate fusion of bodies, movement, and music.

A fleeting but all-encompassing connection between two people – possibly strangers.

“Tango can be debated, and we have debates over it, but it still encloses, as does all that which is truthful, a secret.”

One body, four legs – not a freakish Frankenstein creation but a definition of tango at its purest. An image to capture the intimate fusion of bodies, movement, and music.

A fleeting but all-encompassing connection between two people – possibly strangers.

New Plymouth-based dancer Davina Moffat began learning tango 15 years ago and helps run a weekly milonga (a social tango event) in her hometown. She is as eloquent about the meanings of tango as she is expressive on the dance floor: executing slides, pivots, cross steps and high leg flicks (ochos, giros, boleos and volcadas) with dance partner Jeff Richards. “Tango is the epitome of being present in the moment – it’s pure mindfulness through the body. It’s a moving meditation – I love that,” she says. “Whether you’re a leader or follower in the equation, you are in this intense moment of giving and receiving.”

Originating in Argentina in the late 1800s and early 1900s among poor, working-class migrants from Europe longing for home, the iconic dance is now a global phenomenon, from Buenos Aires, Barcelona and Paris to Tamaki Makaurau (Auckland), Taranaki and Thames at the far end of the world.

Until the ‘Golden Age’ of tango in Argentina in the 1930s when it became popular among the wealthy and spread to London, Paris, New York and Berlin, it belonged to the ports, backstreet bars and brothels of Buenos Aires. The city was a melting pot of music and dance styles brought by European migrants, the descendants of African slaves and native people of the region known as criollos.

In the 1950s, during Argentina’s period of political repression, tango was seen as rebellious because its lyrics became political. This meant large dance gatherings were banned, driving the dance and the music underground. A revival in the mid-1980s saw tango flourish in Paris and other cities. In 2009, tango was declared part of the world’s ‘intangible cultural heritage of humanity’ by UNESCO.

Often alluded to as ‘twelve minutes of love’ in reference to the duration of a tanda (a set of three or four songs you dance with the same partner), tango is popular all over Aotearoa too, including all the main centres as well as Nelson, Tauranga, New Plymouth and recently in Thames. Tango thrives in numerous festivals here, including the annual New Zealand Tango Festival, usually held in Wellington but cancelled last year and this year due to COVID-19.

There are cultural aspects of tango that perhaps don’t seem compatible with the typical Kiwi reluctance to get up close and personal on the dance floor. Getting on the dance floor at all is still daunting for many, let alone in a close embrace with a stranger.

“Forget all that flamboyant footwork, elegant strutting and dramatic lunges of performance tango. For social dancers it is all about feeling,” says Davina. “Of course, you have to learn steps, the importance of posture and balance, and to understand the different styles and rhythms of tango music – but the essence of tango is,” she explains, “surrender.”

“Is there a danger this kind of language can result in tango being construed as an arty form of patriarchal control that just doesn’t fit with a 21st century feminist outlook?” I ask.

“A lot of Kiwi women struggle with this,” says Davina. “They just don’t want to be told what to do, or be led in any way.”

But she gives it a different spin. “Think of tango as a good conversation with two sides. When we teach, we encourage followers to be active followers, be in charge of your own balance and so you both add to the partnership. You both give and receive – it’s not about macho domination. Neither can exist without the other and they are doing very different things but with the common goal – one body, four legs.”

Interestingly, the roles of ‘leader’ and ‘follower’ are not strictly determined by gender or sexual orientation.

Tango music – from 1920s, 30s and 40s classic songs of heart-wrenching longing, passion, love and loss accompanied by melancholy violin and bandoneon – is inseparable from the dance. “You are embodying the song and to a greater or lesser degree the words, music and person. Even non-Spanish speakers feel the sadness and longing without knowing the words,” says Davina.

Among her fellow tangeros who meet to dance this chilly winter’s night are Jeff Richards and his wife, Li-fong Hse. Like Davina, they discovered tango through the salsa route, as many do. Jeff first encountered tango while he was living in Edinburgh while Li-fong attended classes when she was living in Palmerston North.

“It was scary to start with because you’re dancing in a close embrace with someone you don’t know,” says Li-fong. “It’s about finding each other through the dance, and finding yourself as well.”

She appreciates the special bonds within the tango community. “You have instant friends in any city you go to, once you find a milonga.”

They’ve all made pilgrimages to Buenos Aires for immersion courses and all-night milongas. Tango is an industry there, with hotels just for visiting tango students, next to tango studios, escort dancers and tango buskers. Davina even went to a lecture by a top tango instructor who has a PhD on the history of tango. 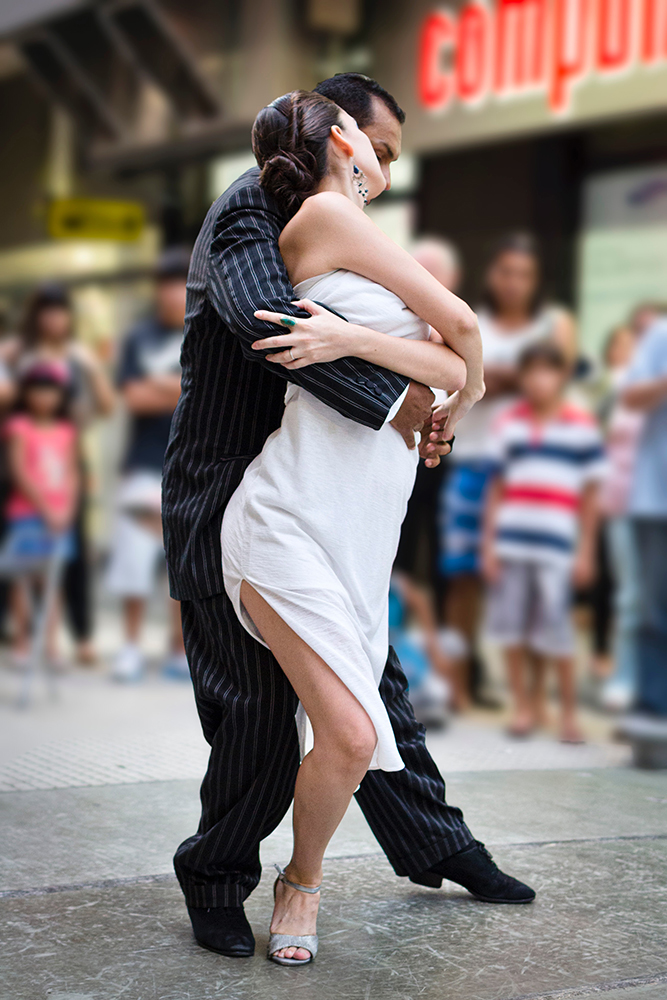 Bulgarian-born writer Kapka Kassabova defines a certain feeling called tanguidad, in Twelve Minutes of Love: a Tango Story (Portobello Books, 2011) – a sensuous memoir of her tango journey which began in Auckland and took her to Buenos Aires, Berlin and beyond.

“It’s a feeling, at once happy and sad, past and present,” she says. “Some experts say tango goes far beyond the music and the dance. There are tango feelings, tango language, tango places and even tango people. You don’t have to know tango in order to experience the world in a tango way. That’s tanguidad.”

That idealised connection may be elusive at first, but it’s what tangeros all over the world aspire to. It could be called a ‘tangism’ – the quest to discover or relive this experience is what drives tango dancers and can turn them into addicts. “Tangism,” says Davina, “is the perfect tango moment where you feel ‘I’m happy now, I could leave and go home after that dance’.”