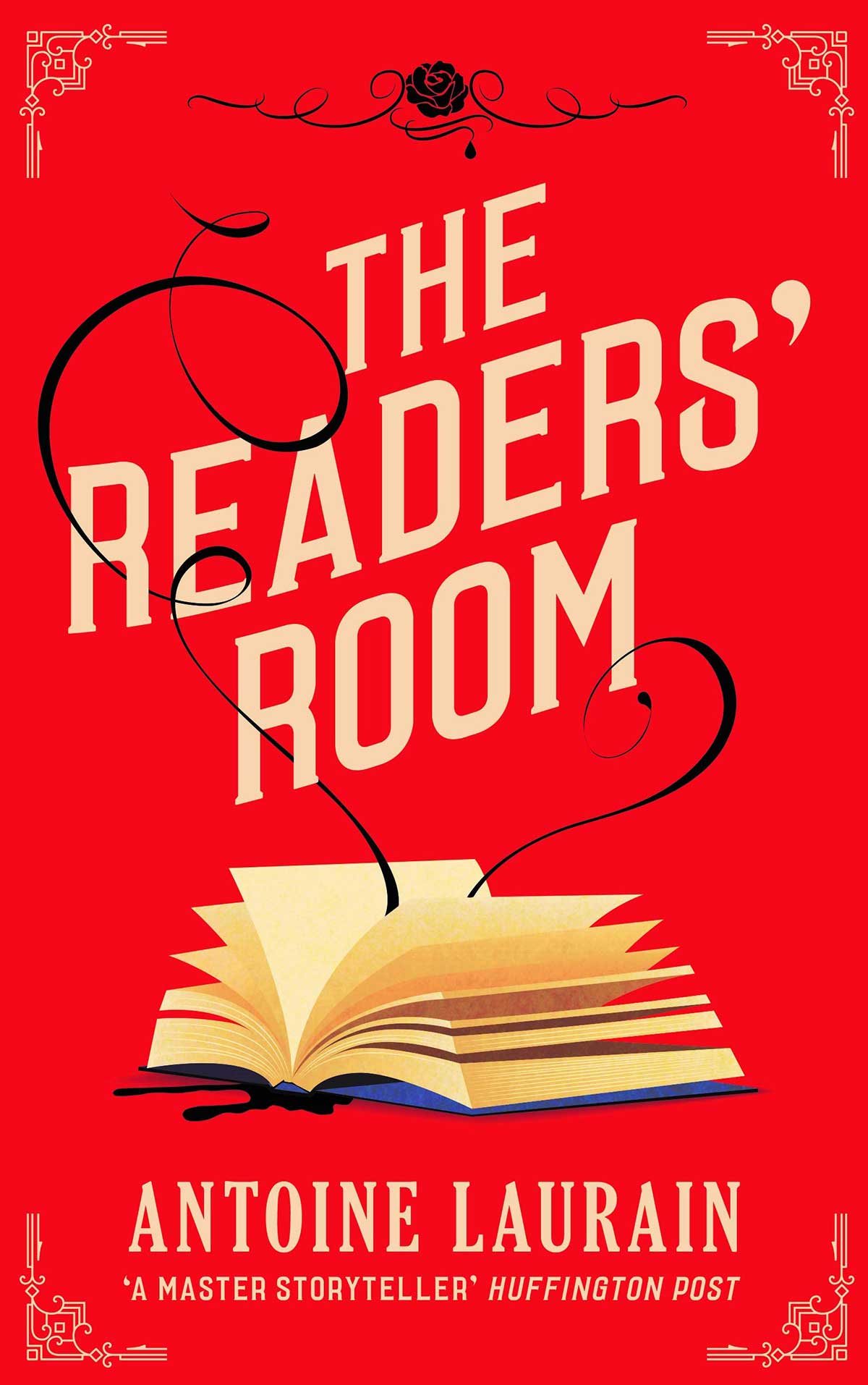 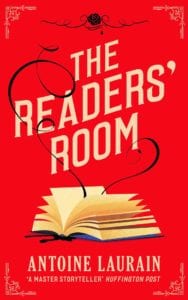 The Readers' Room
By Antoine Laurain[/caption]

The Readers’ Room
By Antoine Laurain

The plot is already thickening as this page-turner opens with our injured protagonist Violaine Lepage trying to chat with the ghosts and imagined images of several famous novelists. Heroes Marcel Proust, Virginia Woolf and Patrick Modiano all make an appearance as Violaine recovers from the accident that sees her facing her worst fears.

Those writers remain in Violaine’s imagination, perhaps inspiring her as she attempts to track down the talented author of a debut crime novel. Called Sugar Flowers, the manuscript arrives at her Parisian publishing house for reviewing in the readers’ room. The writer is unknown, yet Sugar Flowers immediately receives the readers’ highest accolade – a sun symbol: publish as soon as possible. Violaine’s people are convinced Sugar Flowers is something special, but who, and where is the mysterious author?

When the book is shortlisted for the Prix Goncourt, its elusive author still can’t be traced, even as a flurry of email exchanges fly between him (or her) and Violaine. Simultaneously, police begin investigating a series of murders mimicking the book’s plot in parallel real-time scenarios.

Violaine is confused and is suffering memory blanks following her accident. She begins to question what role she might play in the story and discovers an intricate web of intrigue.

This is an ultimately poignant novel for those readers fascinated by the glamour of publishing and the exotic lifestyle of someone like Violaine Lepage. It’s a charming novel of mystery, love, and the power of books.

‘Like fine wine, Laurain’s novels get better with each one he writes’ — Phaedra Patrick, author of The Curious Charms of Arthur Pepper.

Antoine Laurain is the award-winning author of six previous novels including The Red Notebook (Indie Next, MIBA bestseller) and The President’s Hat (Waterstones Book Club, Indies Introduce). His books have been translated into 20 languages and sold more than 180,000 copies in English. He lives in Paris.

Shikake: The Japanese Art of Shaping Behavior Through Design
By Naohiro Matsumura

Shikake: The Japanese Art of Shaping Behavior Through Design

When you’re walking through a mall and notice images of footprints on the ground, what do you do? Without even thinking, you’re likely to place your feet directly in the outlines and follow the steps. This is the subliminal effect of Shikake.

A shikake – or ‘device’ in Japanese – is a design that exerts influence on us through subtle direction; it prompts an obedient subconscious response in a nudge rather than an order. It encourages a particular behaviour without telling its (often unwitting) user the primary purpose of that behaviour.

Author of Shikake: The Japanese Art of Shaping Behavior Through Design, Naohiro Matsumura, has researched the concept for over fifteen years. It’s an idea as astonishingly simple in its logic as it is sophisticated in its psychology. Shikake frees us from a confined way of thinking – or even having to think at all! It creates solutions to logistical problems, incites positive social behaviour, and allows us to address challenges in our homes, offices, and public spaces.

Those challenges reflect our daily decisions, actions, and the recent revelation that in 2021, behavioural change is necessary for our health and survival. Yet as human beings, we find that transforming our own and others’ habits and attitudes is difficult.

Matsumura describes how to identify the hidden design cues that shape our world, making it easier to embrace change. He explains why we respond to those cues as we do and how the intuitive patterns of shikake can help us simplify and cope with some of the most pressing challenges of our era.

The fascinating concept of ‘shikakeology’ is mind-bending yet elegant. It’s practical, makes good sense and provokes an “ahhh …” response. This book is also a tool kit for anyone who wants to create their own mindful designs for their home and workspace.

‘Whether you work in marketing, product design, or merely want to delight and inspire your customers and colleagues, Matsumura’s powerful, inclusive method will show you how to create sustainable behavioral change.’ — Nir Eyal, best-selling author of Hooked and Indistractable.

Naohiro Matsumura is a professor in the Graduate School of Economics at Osaka University. He lives in Osaka, Japan. 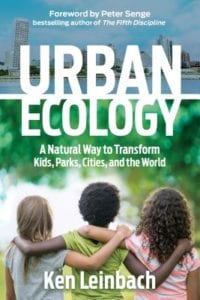 Urban Ecology: A Natural Way to Transform Kids, Parks, Cities, and the World
By Ken Leinbach

Urban Ecology: A Natural Way to Transform Kids, Parks, Cities, and the World

We all know where there’s nature, there’s hope. But science tells us that our natural systems are at risk, that the urban core is reaching boiling point, that climate change is wreaking havoc, and that our young people are despairing for their future. Is it too late to save our planet?

When you read this beautifully inspiring book by Ken Leinbach, hope is restored. Because in Milwaukee, Wisconsin, there’s a (now not so) quiet experiment going down that’s turning heads all over the world. It’s called the Urban Ecology project.

Urban Ecology is based on the idea that nature is everywhere; it just needs to be found, restored, nurtured, understood and made easily accessible. Parks, open spaces, rivers, are all there for exploring and when children venture outside to play, suddenly something powerful happens. Their relationship with Mother Earth is re-discovered.

Encouraging children to engage with nature is the way of the future. Learning about the earth’s ecology leads to an understanding that all is not lost; that there’s hope to be found in unity, knowledge, and collaboration. Our children have unwittingly taken on the long-term burden of climate change; to dive into a solution such as the Urban Ecology model is like a miracle. It’s empowering, exciting, it’s liberating, it’s contagious. And it works!

This is the story of a group of ordinary people in a neighbourhood who created something extraordinary. It’s a result echoed worldwide in various guises: eco-literacy, sustainable practices, health, community connection, and opportunity.

Ken Leinbach is a university-qualified science educator and leader in community-based environmental education. At the grassroots of creating and growing this dynamic urban revitalisation project, Ken is also a specialist on sustainable design, urban environmental education, planetary conditions of concern, finding abundance, the power of story, leadership, fundraising, green living, and the practice of play. Because he chooses not to own a car, Ken can be seen commuting to work by bike, unicycle, or, on occasion, kayak. 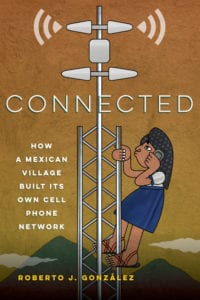 Connected: How a Mexican Village Built Its Own Cell Phone Network
By Roberto J. González

Connected: How a Mexican Village Built Its Own Cell Phone Network

No Amazon rating as yet

Once upon a time, the people in a tiny Mexican pueblo called Talea de Castro became international celebrities stalked by USA Today, BBC News, and Wired Magazine. It was the year 2013, and the antics of this village took our bleary and blasé western society by surprise. Because those antics were all about a fight for a human right: the right to access the internet and a cell phone service.

Taking internet access for granted is a flaw of much of the modern world. And cell phones are accepted as mainstay tools to be used sweepingly and continuously. Connected is the true story of how the indigenous people of this remote Mexican village battled the big bug organisations to build their own autonomous cell phone network.

Joining the digital age didn’t come easy – nor was it 100% successful (or enduring). With zero assistance from telecom companies or the government, Talea de Castro’s efforts unfold as a significant David and Goliath tale. The maverick network that eventuated was fraught with internal struggles and external pressures, and author Roberto J. González describes the toil and heartache involved in this vivid and nuanced picture of its journey.

Connected captures the challenges and contradictions facing Mexico’s indigenous peoples today as they struggle to wire themselves into the 21st century.

It’s a story of collective tribulation, triumph, and tragedy and one that holds this community up high as an ingenious example of creativity, perseverance, and grit.

‘Connected is an excellent book about enabling autonomy through technology that takes place in the magical and complex world that is rural Oaxaca. González frames the story within a broader historical and anthropological context and takes the reader on a very interesting journey. Highly recommended!’ — Lila Downs, Grammy-award winning singer, songwriter, and anthropologist.

Roberto J. González is a cultural anthropologist whose work focuses upon science, technology, and society; militarisation and culture; social and cultural control; and social science ethics. He is a Professor of Anthropology at San Jose State University and author of several books.