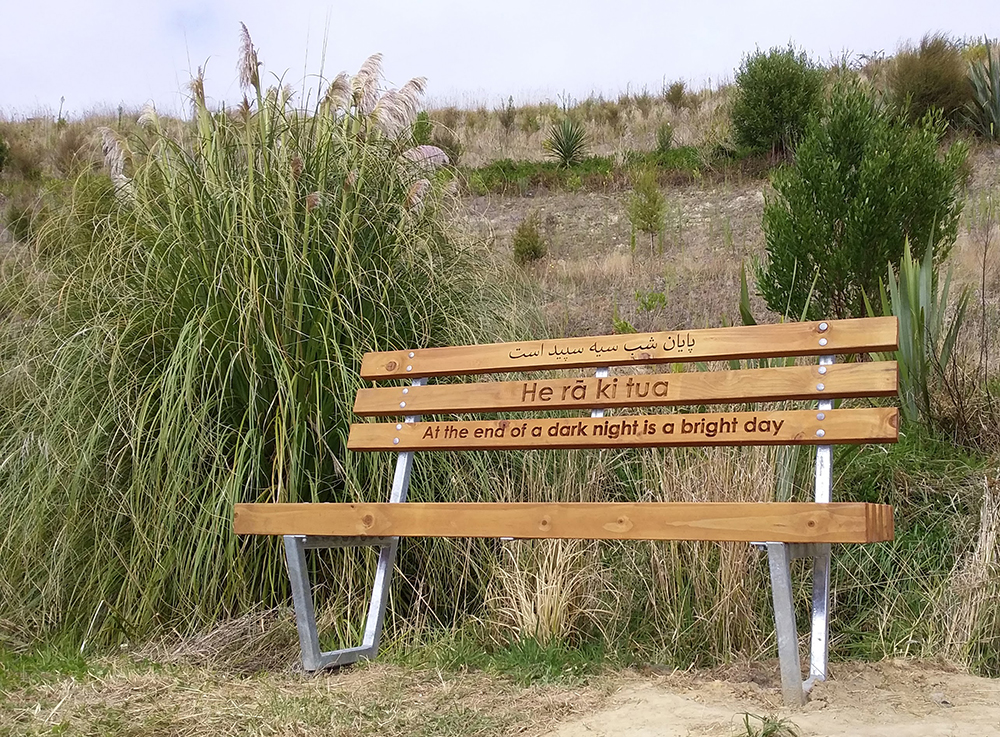 Proverbs of the world – a bridge between cultures

Could Palmerston North become the southern hemisphere’s ‘proverb capital’ and a flagship for successful multiculturalism? A classical studies scholar with a passion for proverbs is doing her best to bring this vision to life.

He Kupu Rangatira – The Proverb Pathway is a recently launched community project that celebrates diverse migrant cultures through an innovative display of proverbs inscribed in two staircases by the Manawatū river as well as in nearby art works and benches. 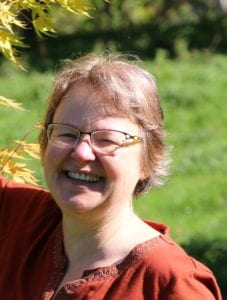 It arose out of a collaboration between Palmerston North City Council's Welcoming Communities programme and Massey University, and is the latest in a series of public activities based around proverbs in that city. But the initial idea of collecting and sharing proverbs as a form of

Could Palmerston North become the southern hemisphere’s ‘proverb capital’ and a flagship for successful multiculturalism? A classical studies scholar with a passion for proverbs is doing her best to bring this vision to life.

He Kupu Rangatira – The Proverb Pathway is a recently launched community project that celebrates diverse migrant cultures through an innovative display of proverbs inscribed in two staircases by the Manawatū river as well as in nearby art works and benches.

It arose out of a collaboration between Palmerston North City Council’s Welcoming Communities programme and Massey University, and is the latest in a series of public activities based around proverbs in that city. But the initial idea of collecting and sharing proverbs as a form of cultural currency is the brainchild of Associate Professor Gina Salapata.

Gina says proverbs reflect and transmit cultural values, beliefs, and traditions. “They’re a great avenue to engage young and old in dialogue and create bridges between different cultures, because they often express the same ideas through different words. This can help us to see that we are really not all that different from one another.”

Gina’s proverbial preoccupation started when she visited her homeland of Greece a few years back. Her mother showed her a handwritten list of some 700 Greek proverbs she knew or had come across in books and magazines. “I was amazed. I quizzed her on some of them – she knew more than half of them by heart,” says Gina. “She even knew some of the stories behind them.”

Aware that her own generation was becoming less familiar with these pithy sayings of the past, Gina photocopied the list, researched to find corresponding proverbs in English and began comparing the meanings and messages with proverbs globally. What fascinated her is that so many proverbs have similar meanings but use local imagery to reflect the environment and context they are from.

Based at Massey University’s School of Humanities, Media and Creative Communication, she saw the potential for proverbs as a positive tool in her adopted community. Manawatū is, after all, one of the most ethnically diverse regions in New Zealand, with more than 130 different ethnic communities having settled there.

“I thought that since proverbs around the world are based on human nature and human reactions and ideas – that is, the commonalities between people – it would be a good way to celebrate multiculturalism.”

Over the past few years, she has instigated a raft of community projects – from a campaign inviting migrants to submit proverbs from their countries for display at the public library during poetry week; organizing a weekly proverb published in the Manawatu Standard newspaper; and facilitating activities with seniors in a rest home using proverbs to spark memories, ideas, and conversations.

Things moved up a notch when she was invited in 2018 to attend the annual colloquium in Tavira, Portugal – the world’s proverb capital – by the president of the International Association of Paremiology (a Greek term meaning the study of proverbs), an association supported by UNESCO.

“The colloquium, promoting intercultural and intergenerational dialogue, was attended by 100 delegates (the largest number ever) from 28 countries, and it was the first time New Zealand was represented, a fact greatly appreciated by the organisers,” says Gina, who has been twice now and presented on some of her proverb-related projects.

Since then, she’s found new ways to share her love of proverbs in the community – this year she helped business owners in George Street in the CBD select a proverb from a culture of their choice and display it on their window (in English translation) during the weekend of the Festival of Cultures in February. About 30 businesses representing 23 cultures, including Turkish, French, Chinese, Indian, Italian, Afghan, Kenyan, Cambodian, Irish, and Māori took part.

The Proverb Pathway establishes proverbs as a permanent feature of the city’s identity. With more than 400 steps, the pathway is located on Te Arapiki a Tāne (The Stairway of Tāne) and offers spectacular views of the Manawatū River and surrounding landscape.

The proverbs appear in their language of origin, with a te reo Māori equivalent (provided by Massey’s Associate Professor, Hone Morris), and an English translation. One of the three Māori proverbs at the site is of particular importance to Rangitāne iwi and reads: Tini whetū ki te rangi, ko Rangitāne ki te whenua / Like the multitude of stars in the heavens, so is the greatness of Rangitāne upon the earth.

Mayor Grant Smith, who attended the launch, said the project is a wonderful addition to the city. “This is part of us wearing our Welcoming Community credentials on our sleeve by drawing from the established wisdom of the many cultures that call Palmy ‘home’.”

With her colleagues, Associate Professor France Grenaudier-Klijn and Dr Ute Walker who initiated the staircase project, Gina is working on the creation of a smartphone app. With this, visitors to the site will be able to get the full story behind each proverb and hear it spoken in its original tongue.

“Proverbs are typically composed by anonymous, ordinary people and sanctioned by the community so that they become familiar; a good proverb needs to be short, simple and to have ‘salt’ (or meaning),” Gina explains.

Defined as “compressed folk wisdom of cultural and social value”, she adds that not all proverbs are good or helpful, however. Reflecting views and values that may have been normalised at the time they were created, some promote misogyny, racism and bigotry. “There were a lot devised by the Nazis against Jewish people. They can be weapons of propaganda and abuse.”

And it looks as if proverbs have a future – especially in Palmerston North. Gina is investigating ways she can involve local schools in cultural discovery through studying proverbs. She also wants to encourage local artists, performers, and writers to create work inspired by proverbs.

Could all this add up to Palmerston North becoming the proverb capital of the Pacific? Gina has started that conversation and dreams of a colloquium in this part of the world to focus on proverbs of the Asia/Pacific region.

“Many things can be done with proverbs to link the generations and cultures, and I think this is much needed in our time,” she says. “When immigrants see their language and script expressed publicly in the form of a proverb, they can feel more included and welcome. That’s the idea – for people to feel recognized and appreciated.”

FROM THE GEORGE STREET PROVERBS PROJECT: 2021 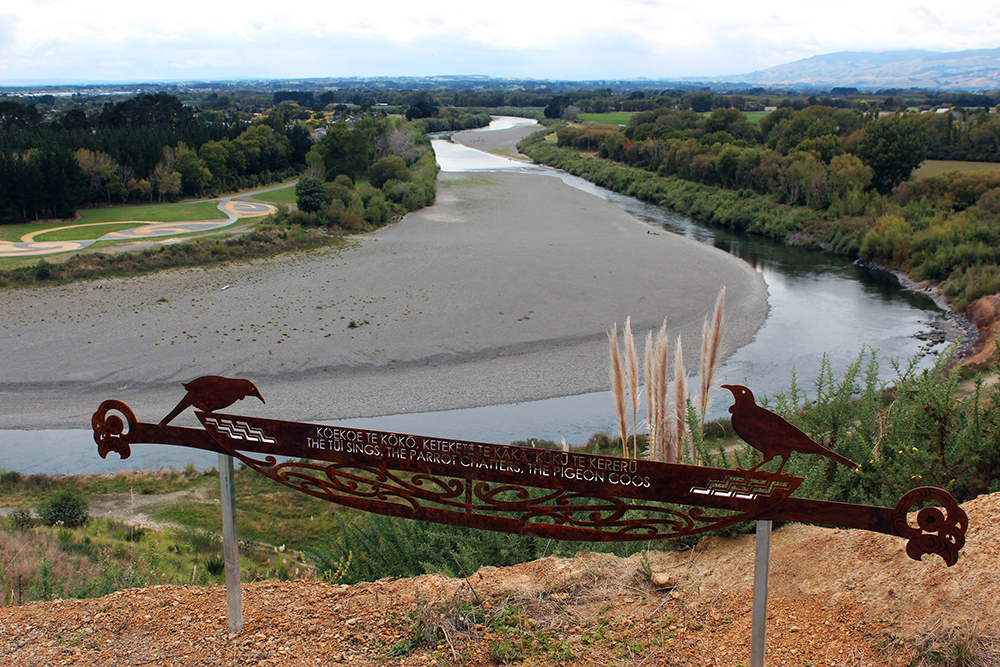 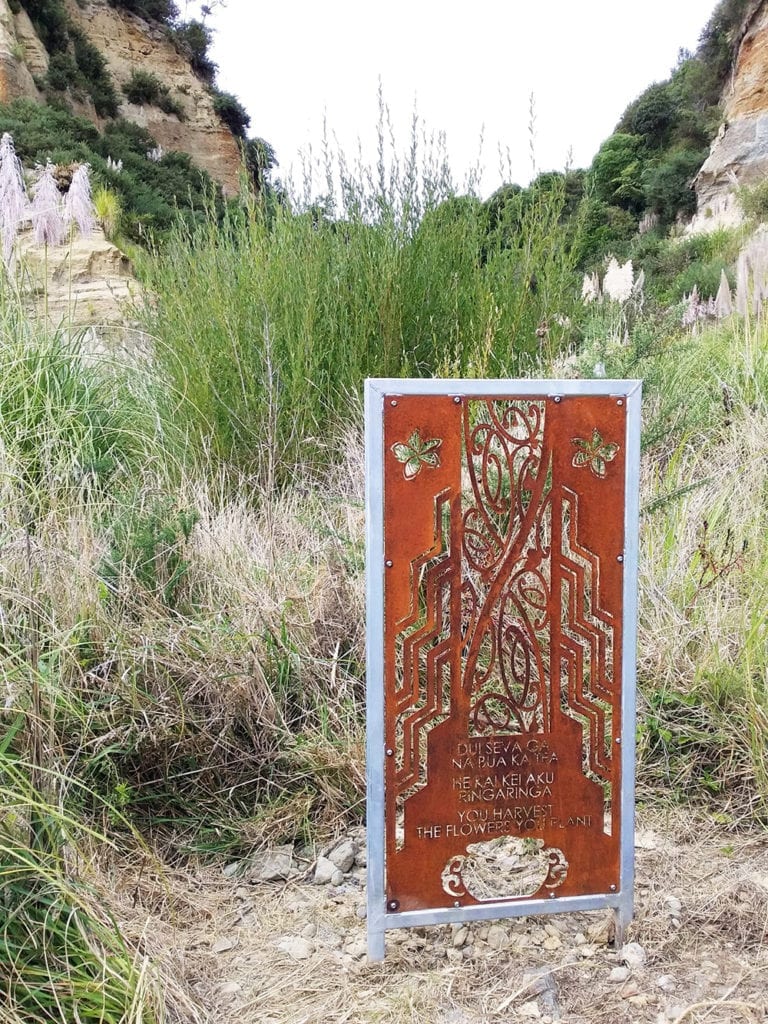 “You harvest the flowers you plant” – Fijian proverb 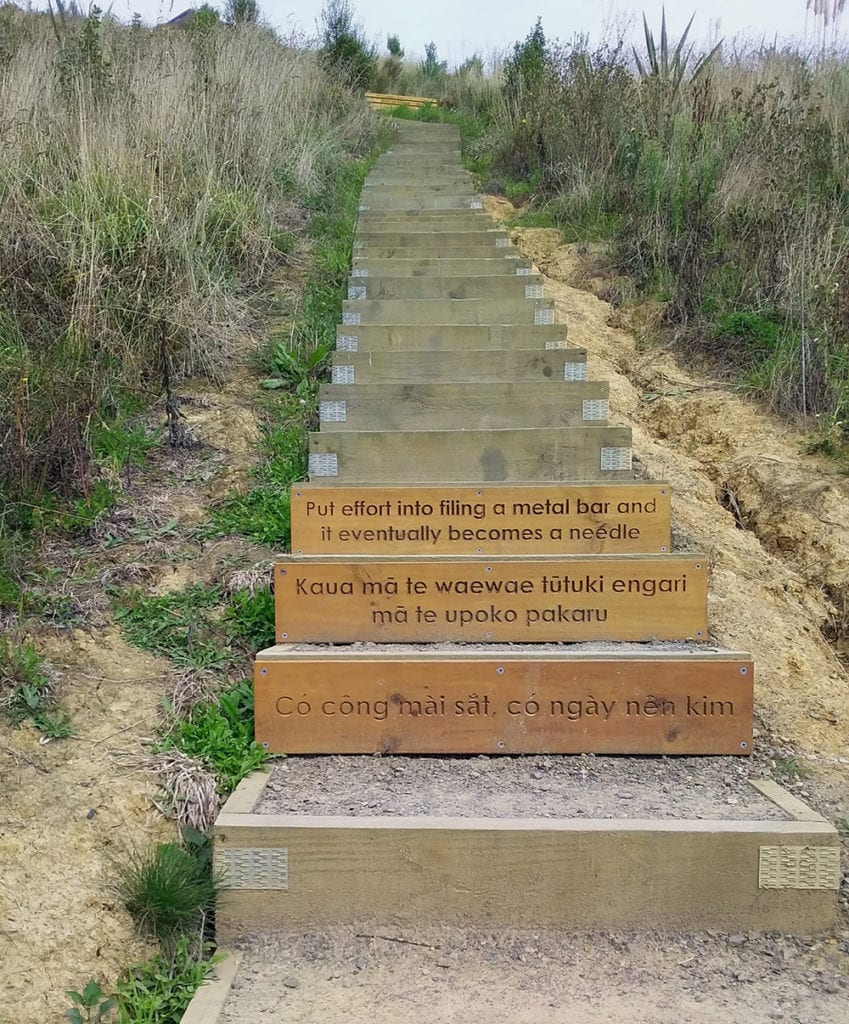 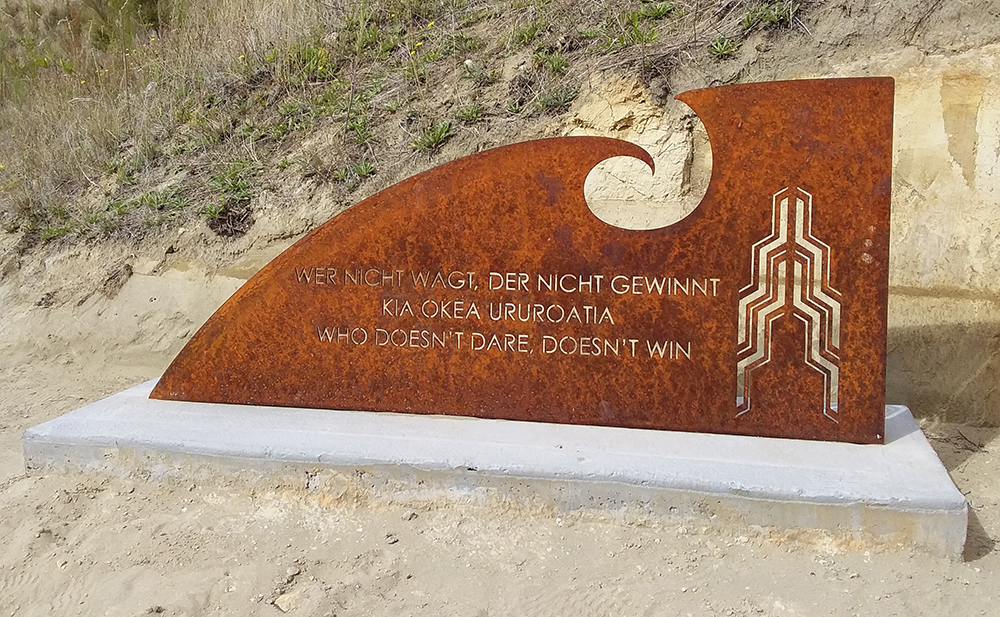 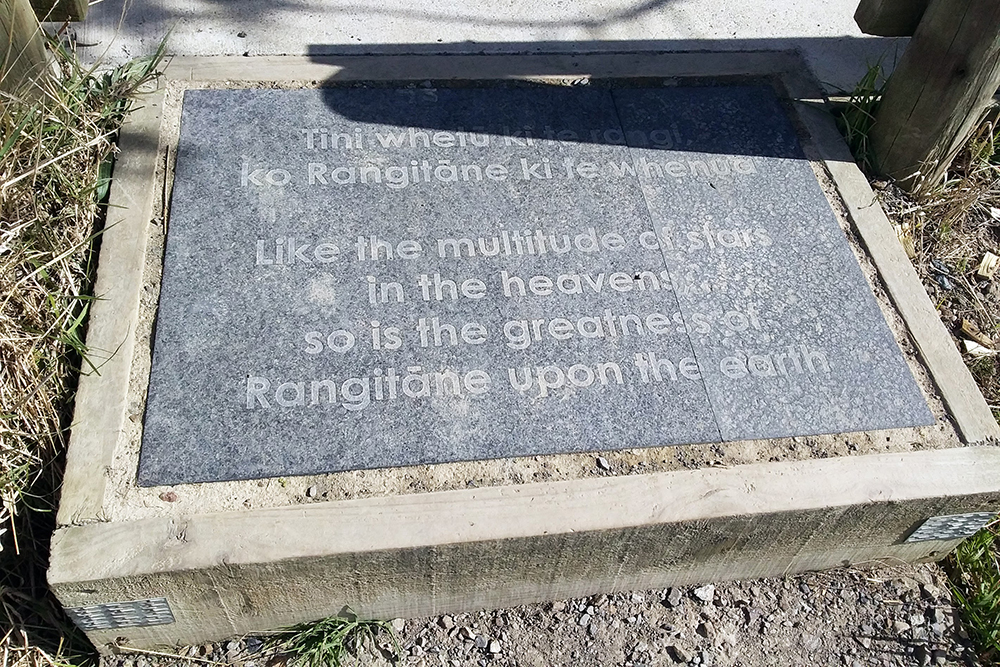 “Like the multitude of stars in the heavens, so is the greatness of Rangitane upon the earth” – A proverb representing Rangitāne iwi