Christmas is the biggest annual celebration in Poland, as it is in most Christian countries. While in many western countries the reasons for celebrating Christmas have become diluted by the sea of commercialism, in Poland, they are still deeply rooted in religion. Some even go as far as pagan times before Catholicism enveloped the country. Alina Suchanski explains some of those ancient traditions.

When I think back to the country of my birth, my earliest memories are of preparations for Christmas Eve and us kids bursting with anticipation of what was to come.

Faith is very important in Poland. It helped the nation through some tough times in the country’s history. With 90% of the 40-million population identifying with the Roman Catholic religion, it is little wonder that Polish people celebrate Christmas with fervour and devotion.

Christmas is the biggest annual celebration in Poland, as it is in most Christian countries. While in many western countries the reasons for celebrating Christmas have become diluted by the sea of commercialism, in Poland, they are still deeply rooted in religion. Some even go as far as pagan times before Catholicism enveloped the country. Alina Suchanski explains some of those ancient traditions.

When I think back to the country of my birth, my earliest memories are of preparations for Christmas Eve and us kids bursting with anticipation of what was to come.

Faith is very important in Poland. It helped the nation through some tough times in the country’s history. With 90% of the 40-million population identifying with the Roman Catholic religion, it is little wonder that Polish people celebrate Christmas with fervour and devotion.

Even just the name for this holiday (or holy day) in Polish – Boże Narodzenie, meaning God’s Birth, is unambiguously linked to, well, to God’s birth. Every child in Poland understands this. In contrast, if you asked any child of an English-speaking country about the meaning of the word Christmas, I doubt that they’d be able to make that connection.

In Polish tradition, Christmas Eve is the most important day of Christmas. December 24th had much significance centuries before Christ’s birth. It’s the day of the winter solstice, when the shortest day follows the longest night, and the mystical symbolism associated with it was closely tied to worshipping the Sun. In early Poland, the word Wigiliawas known as the day before a feast day. Today it is used only as the day before Christ’s birth. The word Wigilia (pronounced vee-geel-yah) originates from the word for vigil, meaning to wait or to watch, and refers to waiting for the birth of baby Jesus. The day starts with fasting and ends with feasting. With severe cold weather and deep snows, most Polish families hold their festivities within each family group.

Wigilia feast – the traditional Christmas Eve vigil supper in Poland, begins with the appearance of the first star, which symbolises the star of Bethlehem. It’s winter in Europe, so it gets dark around 4 pm. In New Zealand, it’s dark about 10 pm, because it’s summer, but I don’t wait that long to eat my Christmas Eve supper. 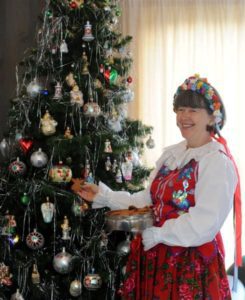 A woman in a traditional Polish costume by Christmas tree decorated with ornaments from Poland.
Photo supplied

My parents used to fast all day, but Mum would give me and my two siblings a slice of bread each to keep hunger at bay. In the morning, we’d be kept busy decorating the Christmas tree that Father would have bought a few days earlier. When we were little, Mum did all the cooking, but Dad had other important jobs. The house would fill with aromas of cooking and baking while we made some ornaments out of coloured paper and hung them up on the tree. Typically, young spruce or fir trees are used for Christmas trees in Poland. They are decorated with glass baubles, plastic icicles, wrapped chocolates, candles, and many homemade ornaments such as paper garlands, shiny red apples, and walnuts painted silver or gold. Long pieces of cotton wool along the branches would be ‘pretend snow’, and bunches of thin cellophane strips called angel’s hair would complete the job. At the top of the tree, Father would place a star, an angel, or a glittering tree topper.

Near the Christmas tree, he would place a model of the manger, called szopka, with a miniature nativity scene inside.

At some stage during the day, Mother would send us outside to check if the first star had arrived yet, while Father put presents under the Christmas tree. He would suddenly appear and announce loudly: “Look, St. Nicholas has been already. Have you seen him come?” and we would wonder how Santa could’ve come in unnoticed.

Candles were lit on the Christmas tree before Wigilia supper. We had to be very careful that the burning candles didn’t set the whole tree on fire, with all the flammable decorations. For that reason, when we grew older, candles were replaced by electric Christmas lights.

The Wigilia supper is the most special, and there is no other like it throughout the year.

Traditionally, there would be hay placed on the table under a white tablecloth to represent the hay in the manger where Jesus was born. In the olden days, small hand-made gifts would be placed amongst the hay for the children. These days, presents are laid under the Christmas tree.

There is always one extra plate on the table for the unexpected visitor. This custom goes back to the days where there were homeless wanderers – the equivalent of the Kiwi swagmen – roaming the country roads.

True to the centuries-old Polish tradition, before the Christmas Eve supper starts, everyone shares a wafer, wishing each other good health, happiness, and prosperity. It’s a bit like Christmas crackers in other countries; the idea of sharing something with other people at the table.

As the tradition dictates, Polish people have 12 different dishes on the table to represent the 12 apostles. The food includes only meatless dishes such as barszcz (beetroot soup), pierogi (dumplings) with mushroom stuffing, cabbage stew, potato salad, and fish – herring and carp, specifically. Mum would make herring in three different ways: with onions and oil, in cream sauce, and with tomatoes.

Carp is usually purchased live a day or two before Christmas and kept alive in a bathtub filled with water. On Christmas Eve, the man of the house had the unpleasant job of bashing the poor thing on the head so then Mum could cook it in several ways: pan-fried, in tomato and vegetable sauce, and jellied in little dishes. Here in New Zealand, no fish dies on Christmas Eve at my place. Like most Polish Kiwis, I substitute locally bought fish for carp.

After Wigilia supper, the children are allowed to open their presents. We would only ever get one present per person, plus some sweet treats and fruit. I don’t remember my parents ever getting any gifts. Christmas presents were for children only.

When the excitement of presents had cooled off, we’d sit around the Christmas tree and sing Christmas carols. Most of these songs are religious in nature, and their theme is the birth of baby Jesus. Some are happy, others are sad, and many of them are centuries old.

When we grew a little older, we started accompanying our parents to Pasterka at midnight, meaning the Shepherd’s Mass, as they were first to greet the newborn Christ. Invariably, the church would be packed, with the crowd spilling out onto the church forecourt. It was a moving experience to be part of a hundreds-strong chorus of children and adult voices singing Polish Christmas carols in unison. It seemed that the walls of the church would crumble under the combined power of our voices.

Other aspects of Polish Christmas include nativity plays called jasełka, outdoor nativity scenes, kolęda (or koliada), the singing of carols, and kulig, a horse-pulled sleigh ride. The tradition of crafting and hand-making Christmas nativity scene models called szopka in Crakow, southern Poland, was in 2018 declared by UNESCO as an Intangible Cultural Heritage. These models combine the elements of Crakovian architecture with a nativity scene. A display of these models is held in the Cracow Town Square every Christmas.

Christmas Day is celebrated in a similar way to other countries, with food and drink. In days of old, it was such an important holiday that physical work of any kind was not even considered. Usually a quiet family time, Christmas Day also has its traditional menu but with no special number of courses. Ham and sausages are very popular as is bigos, or hunter’s stew, often served as the principal dish on Christmas Day, with potatoes or bread and other food leftover from the previous night.

The second day of Christmas is the traditional day of visiting extended family and friends to wish everyone the joy of the holiday season, much like Boxing Day in New Zealand.

In the communist era, the ideas of Christmas, Santa Claus or Saint Nicholas were outlawed, and attempts were made to introduce a non-religious Russian version, known as Grandpa Frost. He never really took off. Polish people stuck to Saint Nicholas. The 45 years of communism were just a blip in the centuries of Poland’s cultural development, not enough to alter deeply rooted traditions of this stubborn nation.