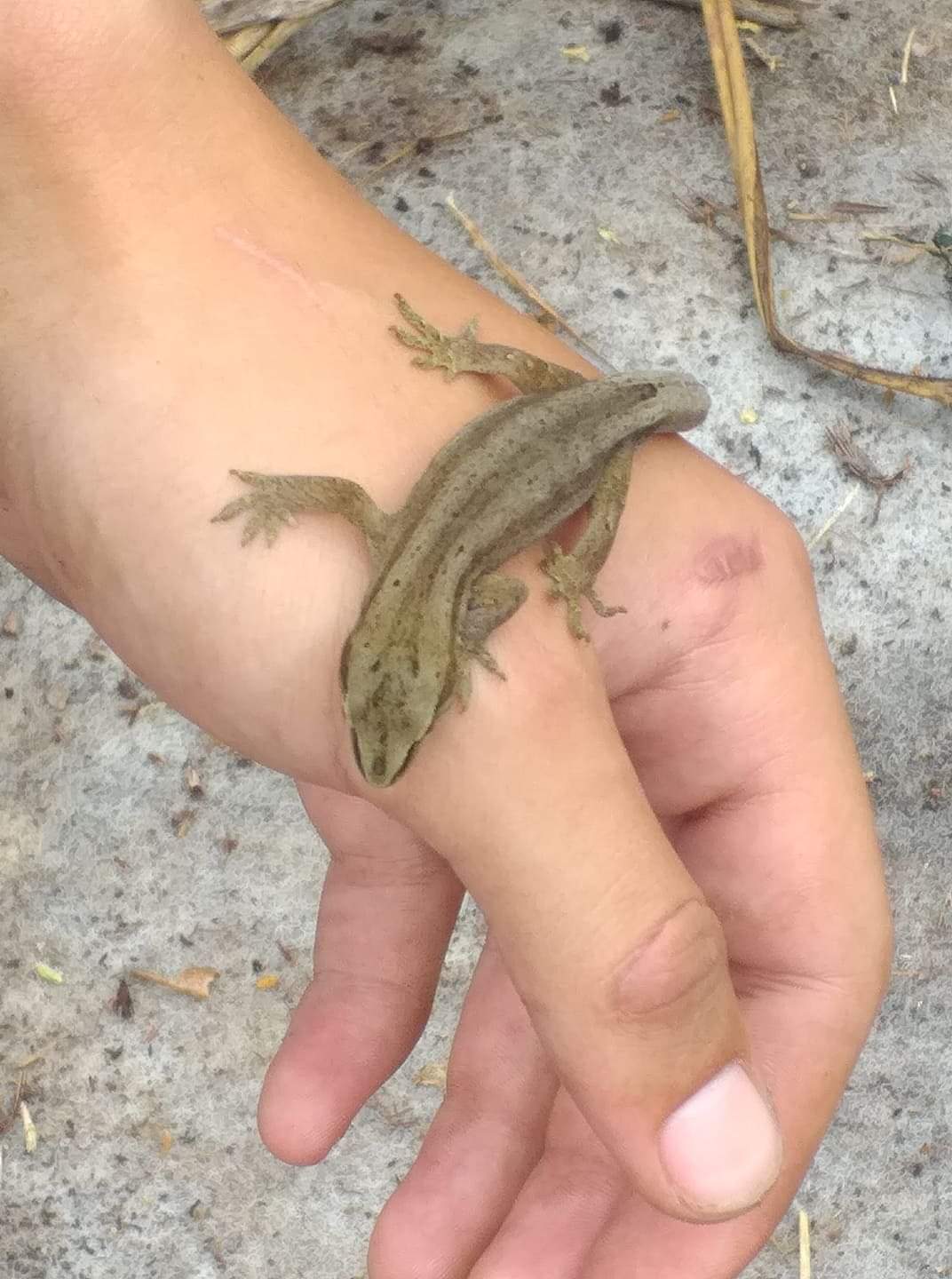 Creating a multi-faceted business to fund a mission to protect, restore, and enhance our natural environment is mission accomplished for North Taranaki Hapū, Otaraua, from the Waitara area. Nga Ringawera Otaraua (NRO) was established in 2013 as the Hapū’s commercial arm in a bid to offer employment opportunities to community members.

Passionate iwi advocate and managing director of Nga Ringawera Otaraua, Donna Eriwata, says the founding of NRO as a fiscal enterprise has since paved the way to the genesis of a whole new eco-initiative. Donna and her team call it “Natives by Natives” - a kaupapa-directed endeavour that wouldn’t exist without the profitable mahi (work) overarching its conception.

Creating a multi-faceted business to fund a mission to protect, restore, and enhance our natural environment is mission accomplished for North Taranaki Hapū, Otaraua, from the Waitara area. Nga Ringawera Otaraua (NRO) was established in 2013 as the Hapū’s commercial arm in a bid to offer employment opportunities to community members.

Passionate iwi advocate and managing director of Nga Ringawera Otaraua, Donna Eriwata, says the founding of NRO as a fiscal enterprise has since paved the way to the genesis of a whole new eco-initiative. Donna and her team call it “Natives by Natives” – a kaupapa-directed endeavour that wouldn’t exist without the profitable mahi (work) overarching its conception.

Natives by Natives grew from a collaboration between industry and iwi that resulted in a vital narrative about environmental stewardship for current and future generations. With a keen eye on understanding the workings of the energy sector, NRO forged constructive associations with one of New Zealand’s main natural gas producers, Todd Energy. Pursuing opportunities to work with Todd culminated in NRO gaining contracts to provide the company with core facility services such as rig camp and work area maintenance, accommodation, cooking, cleaning, transport, and laundry.

The relationship matured into assisting Todd in upholding its vision and policy to “operate in an environmentally responsible manner”, “respect cultural diversity”, and “make a positive contribution to community”.

That community connection is paramount, and Todd Energy consistently walks the talk with its generous sponsorship of Coastguard Taranaki, St John Ambulance services, Todd Energy Aquatic Centre, WOMAD, and the Len Lye Centre. As per Todd Energy’s website, the company supplies over 50% of New Zealand’s hydrocarbon energy and, according to the Climate Change Commission, is expected to play an essential role in supporting the country’s transition to renewable sources until at least 2050.

However, Todd’s historical Central Otago origins are rather more humble.

The company’s commercial roots go back to 1885 when pioneer Scotsman Charles Todd set up a fellmongery business whilst also managing the Quartz Gold Mine at Bendigo near Cromwell. Diversification into further enterprise was pursued by his son, Charles, and the family were responsible for introducing the first motorcar to the district in 1908.

This foray into exploring the benefits of mechanical transportation led to a decade of Todd-operated motor vehicle dealerships, until in 1929, a price war cut off petroleum supplies to one of Todd’s Christchurch outlets. Refusing to be stonewalled, the catalyst to diversify was sparked yet again, and Todd launched the Associated Motorists Petrol Company Limited. The country’s first indigenous petroleum marketing company was born.

Explorations of Taranaki’s abundant gas and condensate products commenced in 1970 and Todd’s New Zealand-owned enterprise has continued to expand into becoming a stalwart supplier of affordable energy for Kiwis.

Todd’s pledge to support the nation as it moves towards a low-emissions economy is aided by Nga Ringawera Otaraua via a relationship that works symbiotically. Successful dealings between the two (NRO and Todd) enabled fresh new contracts on a different tier and the subsequent initiation of an environmentally-focussed company encompassing the Hapū’s kaitiakitanga (guardianship of the land): the Natives by Natives project.

Pou (leader) Darlene Gibson began her role as project planner in November 2021. Darlene is one of six Pou working with Kaimahi – a team of twelve enthusiasts with external contracts to mitigate the negative environmental impacts of industrial, commercial, residential, and rural development.

The momentum of kaitiakitanga is well underway. Darlene calls her mahi “balancing the footprint”.

“I was brought up by my nana and my koro (grandfather) – who some called the “Medicine Man” – at Ōpunake. He would take me out walking and teach me about what plants I could eat, the berries, the ferns. We would pick and collect, and I learnt about rongoā (traditional Māori plant-based healing). It’s just something that’s always been in my blood,” says Darlene.

A young life engrossed with nature’s beauty and bounty led Darlene to develop her own little bit of land in time to come. She says, “Some people grow up surrounded by music and are musical; I grew up with plants – they are part of who I am.” Darlene is now culturally and innately inspired to pass on the teachings and knowledge of her koro to the next generation – her children. “I was brought up understanding plants, and I wanted to take those values and reinstate them into how I bring up my kids, to keep the connection. They know the difference between plants in the ngahere (forest) – and they know how to help me source them!”

Completing a level 4 course in permaculture design gave Darlene the technical nous to complement her mirimiri (natural gift) and a broader skill base in bio-intensive gardening, earth-building, garden composition, waste recycling, appropriate technology, food processing and preservation. The art of permaculture is a core strategy for Natives by Natives because it underpins the systemic objective of self-sustainability Donna has at heart.

“We are building our own nursery in Waitara to grow enough plants for our Natives by Natives projects. We purchased just over five hectares from the council fifteen years ago – our kaumātua (elders) mortgaged their houses to raise the funds and guarantee the loan! They had faith in us! We hope to be growing 20-30,000 native plants and become self-sustaining before 2024,” says Donna. 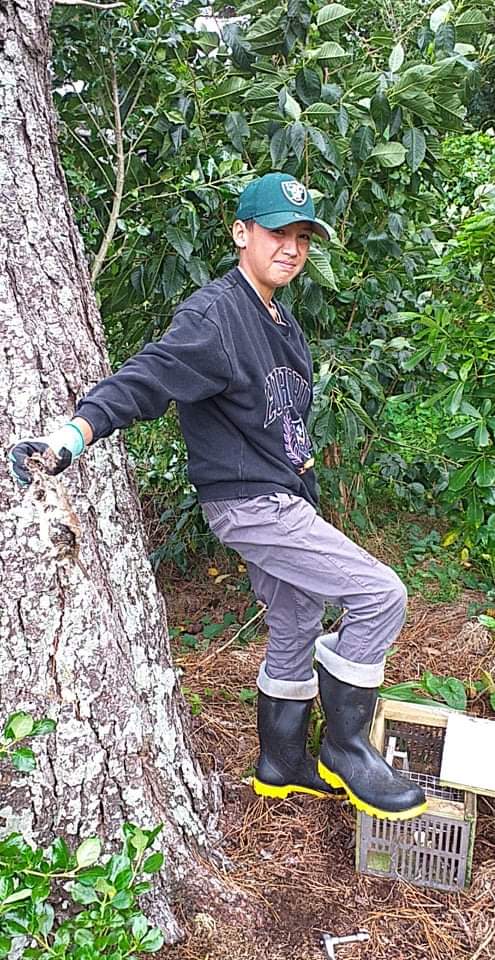 Tamariki working with the team in the ngahere trapping pests. 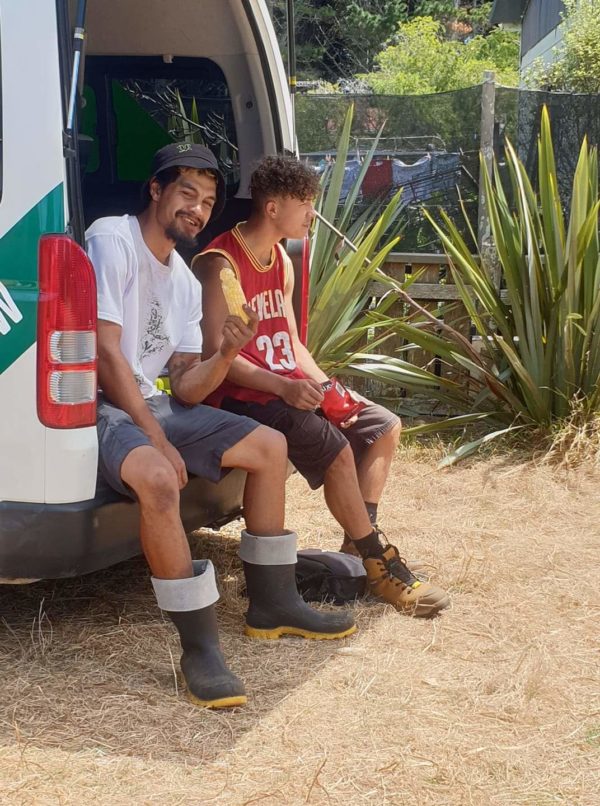 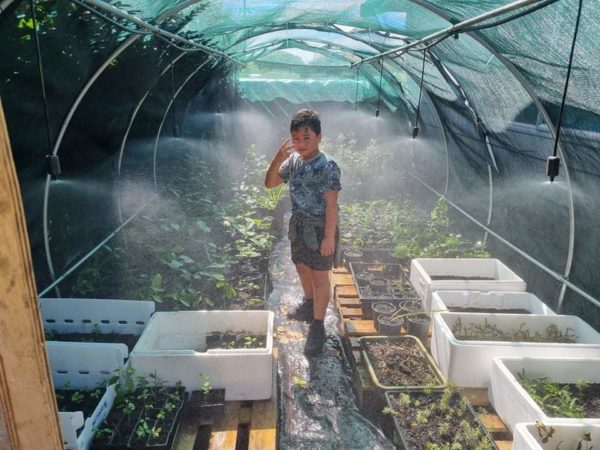 Tamariki working with the team in the native tree nursery.

Eco-sourcing those plants is an ongoing adventure. Darlene’s team sources from local areas to reduce transplant trauma and ensure the plant thrives in its new, yet similar habitat. Matching the type of plant with the purpose for which it’s intended is also key. Some plants like oioi (rushes) and patete (five finger) work as excellent filtration systems, cleansing water runoff before it hits the awa and waterways that run alongside a property. Toetoe offers erosion control, karo (pittosporum) grows well in coastal areas. All offer wildlife habitat, shelter, or edible food resources. 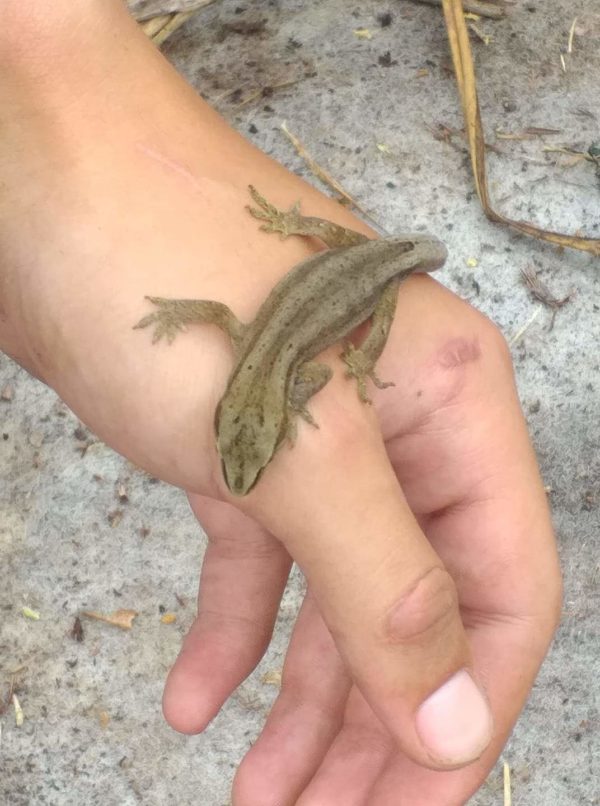 “As town sections become smaller, we are encouraging property owners to appreciate the value in seeing public reserves and walkways as part of their own backyard and sharing responsibility for them. Or in allowing a wetland or having a food garden rather than a flower garden,” says Donna. “The beauty of native planting is in bringing back our manu (birds and other flying creatures such as bats, butterflies, and cicadas) and endangered species.” An area-specific gold-stripe gecko (Hoplodactylus chrysosireticus) was spotted recently, spurring national attention. “We were all brought up seeing [common] copper skinks underneath leaves but to actually see some of these rare ones is just amazing!” Darlene exclaims.

Providing habitat for flora and fauna means including a natural ecosystem in the design plans of any property development or riparian planting. To this end, Otaraua Hapū works closely with councils, overseeing resource, building, and subdivision consents in their rohe (district) to ensure blueprints adhere to lawful environmental standards. They also act as ambassadors for nature in helping developers understand the holistic benefits of sustainable land management – and the underpinning cultural significance. “I think it’s just opening up people’s minds into thinking a different way, changing thought patterns on why different gardening techniques or planting methods work better for the environment, and for us,” says Darlene. “We work through the process with the owner and like to tell the story behind why certain plants are beneficial for specific purposes.”

The team makes a site inspection and assesses the geology, existing ecology, and proximity to natural waterways. Other Pou will look at ground preparation, pest and weed control, and fencing and pathway requirements. Where required, baseline soil and water monitoring is undertaken – before, during, and after works have commenced – using the “Mauri Compass” system which works alongside western science as well as traditional and cultural values.

Stormwater disposal is a primary concern. “Our waterways are mahinga kai (food-gathering places),” says Donna. “Hard surface water, farming runoff, and pipes and culverts alter the ecological balance of our natural veins and tributaries. We need to identify what our people are eating from there, if it’s safe, how to cook it differently to make it safe, and how to regenerate the environment to produce enough kai to feed everyone. We want that water to be the same quality as before the operation proceeded, or even better.”

Once appraised, the hapū and the iwi’s environmental team will write the kaupapa and tailor a plan addressing the needs of the development, the natural habitat surrounding it and the sustainability of both.

The complexity of these activities has been simplified by engendering strong relationships with local and central government agencies, farmers, community leaders, and property developers Taranaki-wide; the strong belief of tino rangatiratanga (self-determination/self-government), the rights bestowed by the Treaty of Waitangi; and the responsibility that Otaraua Hapū takes seriously as kaitiaki (guardians) of the whenua (land). 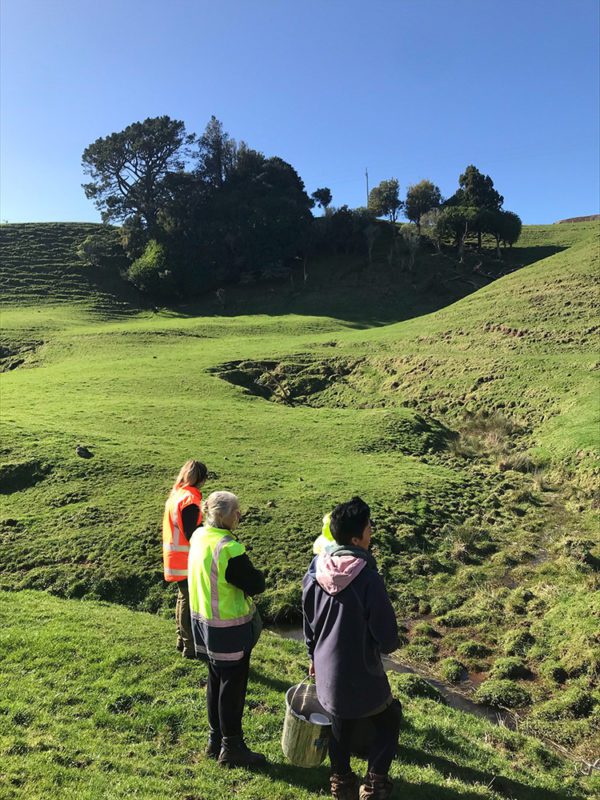 Otaraua ecological assessment; a walk through with 2x ecologists, Todd Energy staff and Ngati Rahiri and Otaraua hapū in Tikorangi. Collecting water and eDNA samples and identifying species and wetland areas with potential for fencing of native trees. 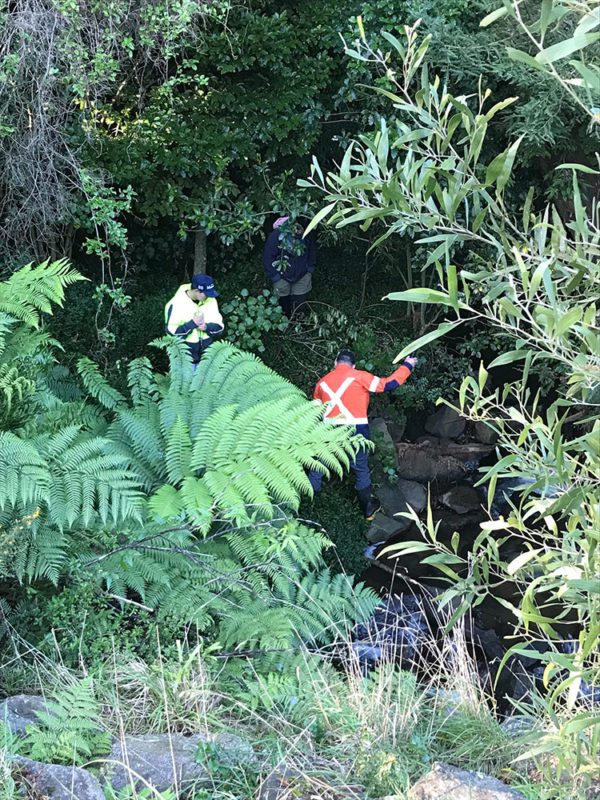 The mahi just keeps on happening – and not just locally. Auckland-based charitable trust Trees for Survival (TFS) teaches school students about conservation, revegetation, wetland and habitat restoration, stream quality protection, and natural biodiversity, and is in the process of establishing a presence in Taranaki with the support of Todd Energy. Donna welcomes TFS’s presence in the region with open arms and is happy to help.

The Natives by Natives’ narrative is akin to the Māori proverb: Kia whakatōmuri te haere whakamua (I walk backwards into the future with my eyes fixed on my past). It looks back at a time when nature flourished and pushes to preserve and regenerate that moment. It fosters the habitat necessary to support flora, fauna, and people, and allows nature to work out its ecological lifecycle unhindered. “All these things – our company infrastructure, employees – management and teams – and investments in our environment have been made possible because of our business, Nga Ringawera Otaraua,” Donna says. “It’s enabled us to do our kaitiakitanga. We’re so grateful.”