Memories, masks, and mortality – a theatrical journey to Mumbai

What do ice cream and vanishing vultures have in common? Plenty, it turns out, if you are a playwright/actor looking for an original story with an intriguing theme.

These seemingly incongruous subjects – frozen confectionery and scavenging birds – are at the core of Indian Ink Theatre Company’s newest production, Paradise or The Impermanence of Ice Cream; a one-man show of seven characters plus a gangly-legged vulture on strings.

It’s the tenth production by the multiple award-winning company co-created by actor Jacob Rajan. He and collaborator Justin Lewis teamed up to form Indian Ink two decades ago, following Rajan’s first ground-breaking, one-man show, Krishnan’s Dairy in 1997. The pair have gone on to earn numerous accolades for subsequent productions by combining their love of masterful puppetry and masks to augment powerful storytelling.

What do ice cream and vanishing vultures have in common? Plenty, it turns out, if you are a playwright/actor looking for an original story with an intriguing theme.

These seemingly incongruous subjects – frozen confectionery and scavenging birds – are at the core of Indian Ink Theatre Company’s newest production, Paradise or The Impermanence of Ice Cream; a one-man show of seven characters plus a gangly-legged vulture on strings.

It’s the tenth production by the multiple award-winning company co-created by actor Jacob Rajan. He and collaborator Justin Lewis teamed up to form Indian Ink two decades ago, following Rajan’s first ground-breaking, one-man show, Krishnan’s Dairy in 1997. The pair have gone on to earn numerous accolades for subsequent productions by combining their love of masterful puppetry and masks to augment powerful storytelling.

With the support of a full-scale production team, their latest script comes to life – even though it is about death, existential angst, and regret – through Rajan’s mesmerising movement and his impeccably executed craft of inhabiting a diverse panoply of characters. He swivels between them in a split-second, instantly acquiring a new set of mannerisms and vocal expressions while interacting with an impressive vulture puppet visibly manipulated to clever effect by puppeteer Jon Coddington.

As the boundaries between memory, time and place shift with the aid of evocative backdrop visuals and a blast of Bollywood, a bizarre tale of love, happiness, and the afterlife unfolds in modern-day Mumbai – a city famous for its colour and chaos.

The lights come up on ageing protagonist Kutistar, aka Rajan as a Harvey Norman salesman. The fellow is sprawled across a rock as his journey into the past begins. In a reverie/delirium he revisits his youthful love story set in Mumbai, where he was once embroiled with an alluring Parsi ice cream seller. Not only is she preoccupied with keeping her business going, she’s in a fraught state about the fate of her dead grandfather’s body. Their friendship never reaches romantic fruition. Is the lurking vulture to blame? Bittersweet humourpermeates the reflections of the hapless youth.

The genesis for this latest production was a trip in 2019 to Mumbai where Rajan and Lewis stumbled on an intriguing story about disappearing vultures. It was the role the birds play in the Parsi community’s time-honoured ritual for disposing of corpses by exposing them to the scavenging birds within the walls of a sacred, hilltop tower that captured their imaginations.

This ritual, ecologically sound, however macabre by Western standards, came under threat when Mumbai’s vulture population came close to extinction in the late 1990s as a result of ingesting the livestock version of the drug Diclofenac. It proved toxic for the vultures feeding on cattle carcases. The drug was banned in 2006, but by then it had already wiped out 95 per cent of these birds.

Back in Aotearoa, the writers did more research and forged their own story, which takes the audience into uncharted and strange territory.

But the ghostly ‘Towers of Silence’ alluded to in the script are not a fantasy of the playwright’s imagination. They are real – Rajan and Lewis visited the site on Malabar Hill before departing Mumbai and learned about the significance of the location for Parsi corpses and the endangered vultures.

Laughter in the face of mortality

Indian Ink’s philosophy is the idea of the ‘serious laugh’ achieved theatrically by “opening mouths with laughter to slip serious ideas in”. This was especially important for Paradise, which Rajan refers to as “a meditation on death”.

“It’s not a great marketing thing, a meditation on death, because we are, as a species, so resistant to it,” Rajan says. Thus, ‘Impermanence’ is a necessary euphemism for death.

A key influence for the production is a book that Lewis read around the time of the Mumbai trip; Pulitzer Prize-winning Denial of Death, by Ernest Becker. “It’s an incredible book,” says Rajan. “It’s a unifying theory of psychology. In a nutshell, we are the only species on the planet that knows we are going to die.”

The book examines the lengths we go to avoid and deny the reality of death, whether through having families (perpetuating ourselves through our children), or material wealth or religious beliefs that promise a glorious afterlife – all the ways we buffer and protect ourselves from fear of death. He acknowledges it is “quite hard to explain, but we found it really compelling. And we embedded it in all our characters.”

Although the characters and setting are Indian, the Western theatrical style of the company is generally an ‘alien space’ for Indian audiences, says Rajan, who is notably the first Indian actor to graduate from Toi Whakaari – The New Zealand Drama School.

Company co-director, writer, and performer, he is an Arts Foundation Laureate and founding partner of Indian Ink Theatre Company. He collaborated to create Krishnan’s Dairy, The Candlestickmaker, The Pickle King, The Dentist’s Chair, The Guru of Chai, and Kiss the Fish and has performed them throughout New Zealand and internationally. 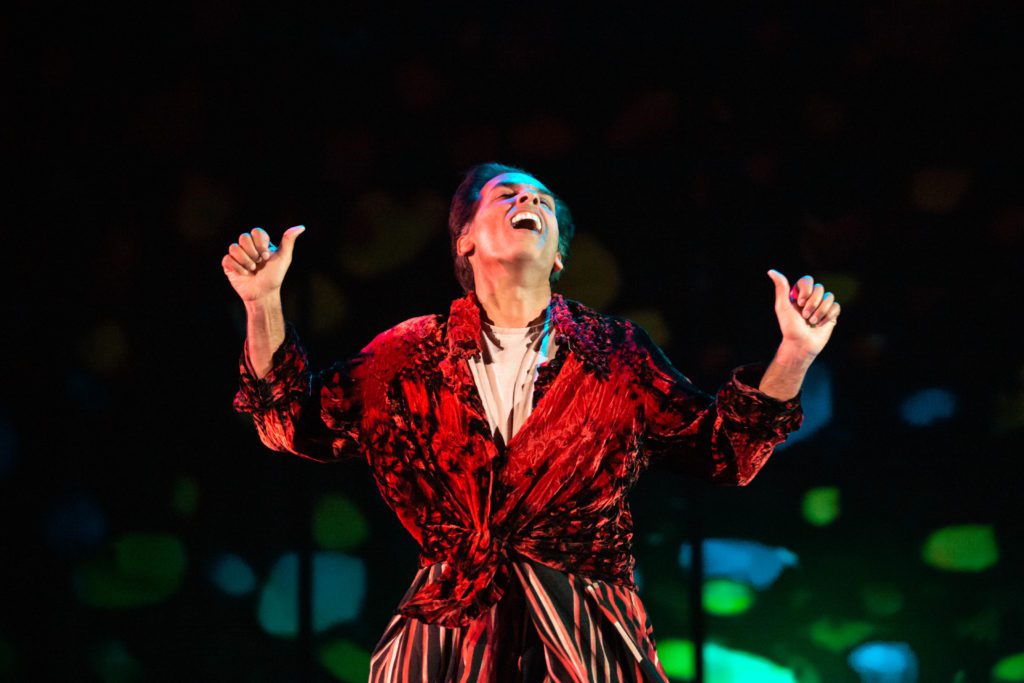 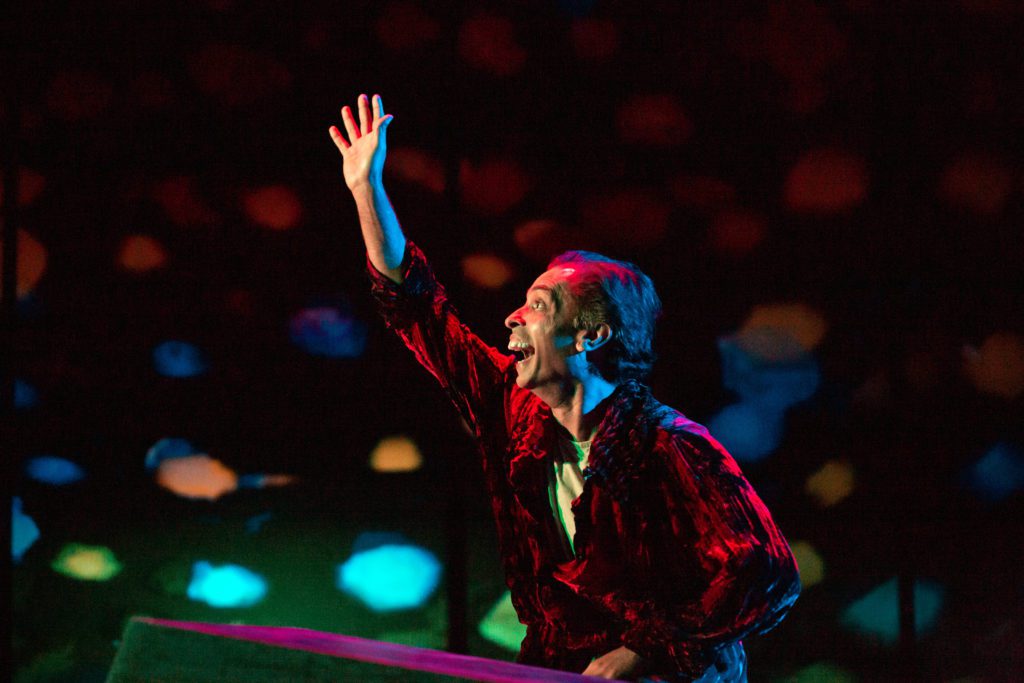 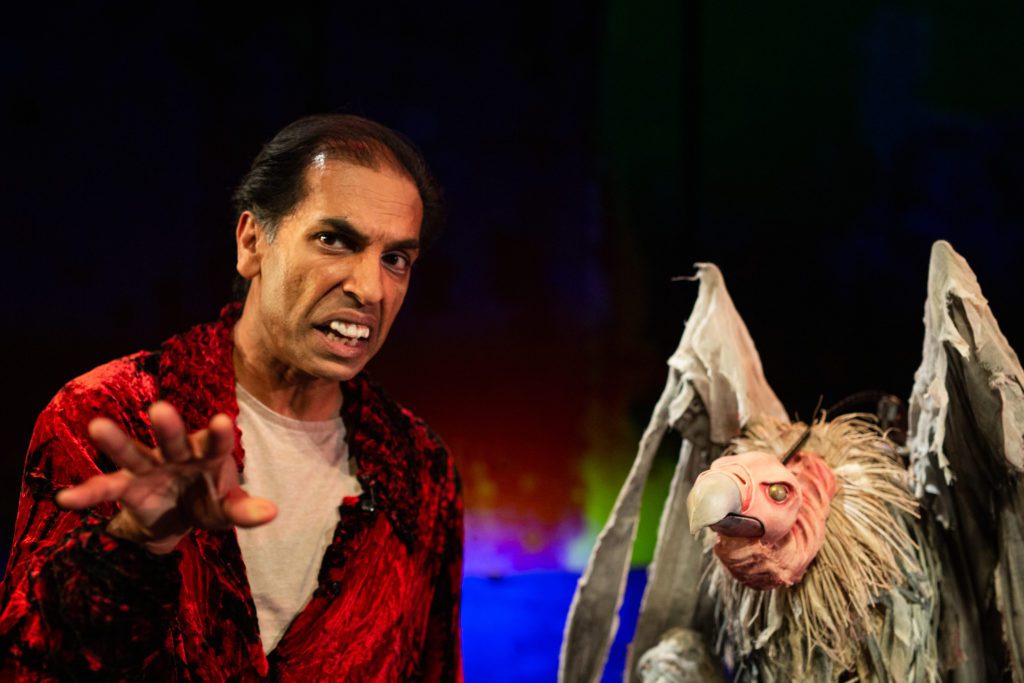 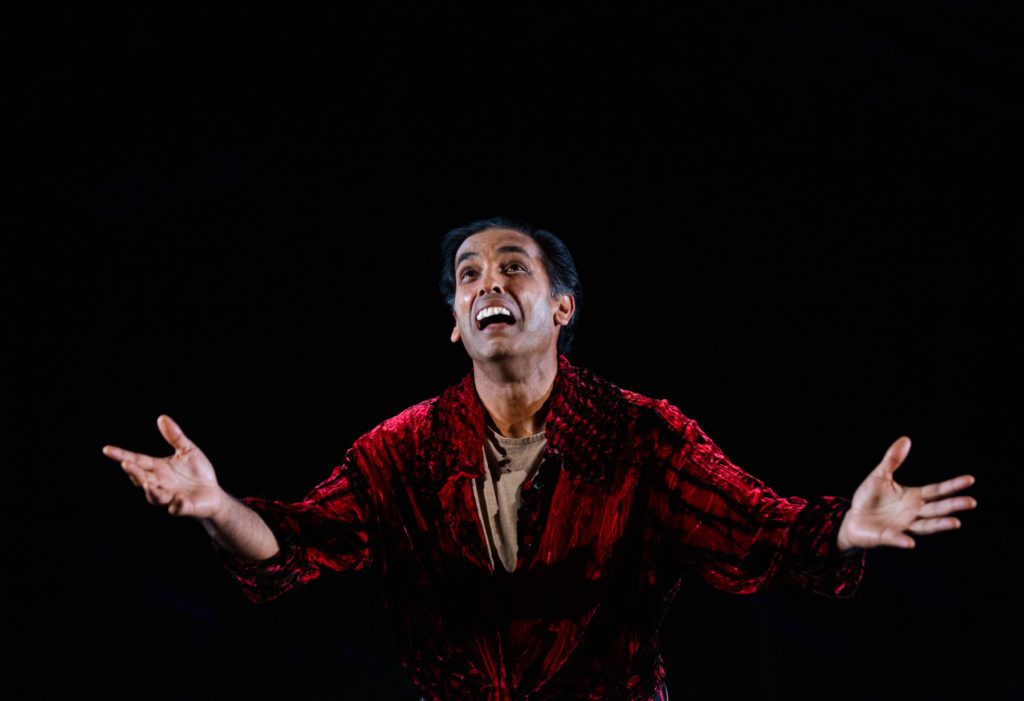 Rajan won Best Actor in the 2010 Chapman Tripp Theatre Awards for The Guru of Chai and was nominated for the Stage Award for Best Actor at the Edinburgh Fringe. He has also featured in New Zealand television series Outrageous Fortune and Shortland Street. In 2013 he was made a Member of the New Zealand Order of Merit (MNZM) in the New Year’s Honours List.

Rajan’s family originates in Kerala, Southern India. He was born in Malaysia and immigrated to New Zealand at the age of four with his parents who came together in an arranged marriage – a subject he explored in Krishnan’s Dairy.

He has a degree in microbiology and a teacher’s diploma but discovered his love of drama while studying science and tells me: “I really love theatre. Often people can confuse theatre actors as just waiting to get into a film. It’s not true.”

Theatre for the soul

The use of masks is a hallmark of all Indian Ink productions ­– an art Rajan has studied through workshops with theatre legend John Bolton. Justin Lewis is a graduate of the Melbourne-based John Bolton Theatre School and Rajan describes Bolton as his guru. It was from him that he learned about the power of being ‘possessed’ by the mask and channelling a character via a mask rather than acting.

The kind of theatre he likes the most is when the audience is doing some of the work. “They really have to enter into that childlike sense of make-believe, which you don’t do in film. I try to engage the audience’s imagination because I’m convinced that when you engage their imagination, you enrich the soul,” he says.

“The aim is to leave an indelible imprint on your heart: that’s why we’re called Indian Ink.” Indian Ink’s productions have toured Australia, the UK, US, Germany and Singapore and Paradise has already been snapped up for North American touring in early 2022.

For Rajan, doing theatre is “a semi-religious communal experience where audiences come in as strangers, but leave having experienced something together.” 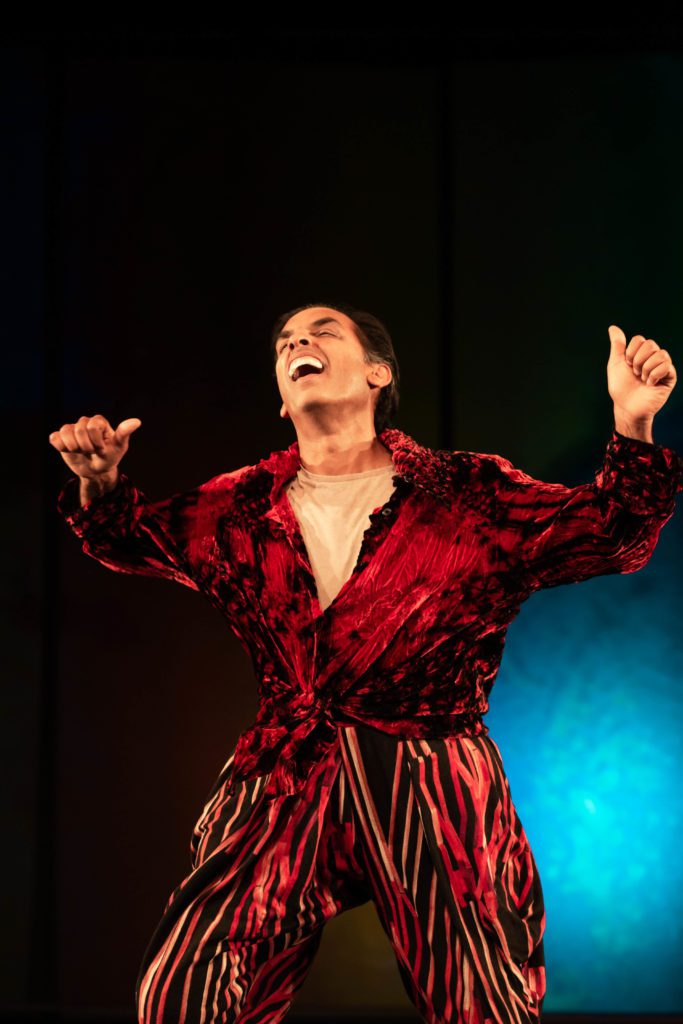