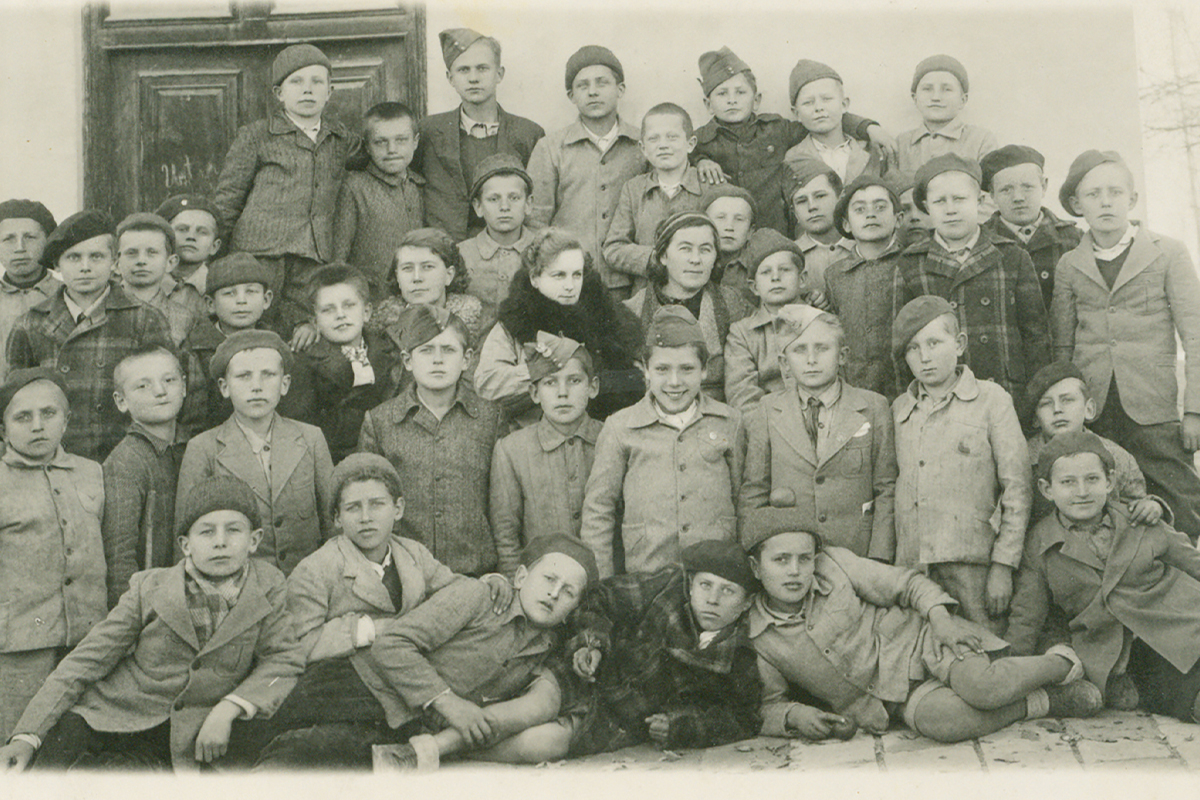 ‘Little Poland’ in Pahiatua – a story of 733 Polish children

New Zealand is a country of migrants – from Māori ancestors arriving in their waka, to early Europeans and modern-day immigrants who continue to arrive from different corners of the world. But while migrants make the choice to emigrate, there are those less fortunate who are forced to flee their country, because of war, civil unrest, brutal regime, or famine.

Although the first refugees into New Zealand arrived in the late 1800s, the first official refugees accepted by the New Zealand government under its formal refugee resettlement programme, were a group of 733 Polish children. Alina Suchanski, a former Polish refugee herself, tells the story of her young compatriots who arrived in this country during World War 2.

New Zealand is a country of migrants – from Māori ancestors arriving in their waka, to early Europeans and modern-day immigrants who continue to arrive from different corners of the world. But while migrants make the choice to emigrate, there are those less fortunate who are forced to flee their country, because of war, civil unrest, brutal regime, or famine.

Although the first refugees into New Zealand arrived in the late 1800s, the first official refugees accepted by the New Zealand government under its formal refugee resettlement programme, were a group of 733 Polish children. Alina Suchanski, a former Polish refugee herself, tells the story of her young compatriots who arrived in this country during World War 2.

In 1940, 4-year-old Tony Leparowski was in Semipalatinsk, Kazakhstan, 9-year-old Zygmunt Kępka in Karabash in the Ural Mountains, 3-month-old Teresa Dmochowska in Siberia and 10-year-old Jozef Kubiak in Arkhangelsk by the White Sea.

Why were these children and thousands of others scattered all over the vast interior of the Soviet Union, so far away from their homes in eastern Poland? And how did they end up in New Zealand?

The answer takes us to the beginning of WW2. The secret pact signed before the war by Russia and Germany divided Poland along the Bug River into the western, German part and the eastern, Soviet-occupied zone. On the 1st of September 1939, Germany attacked Poland marking the beginning of WW2. Two weeks later, while the Poles were locked in the fight against the Nazis, Russia dealt Poland a deadly blow by attacking from the east.

Soon after that the Soviets started taking military prisoners and began systematic deportations of civilians to labour camps and kolkhozes (collective farms) in remote parts of their country. The children’s peaceful existence ended abruptly with Russian soldiers banging on the doors of their homes ordering everybody out.

Over 1.5 million Polish citizens, mostly women and children, were forcibly removed from their homes at gun point, loaded onto trains and taken to Siberia, Kazakhstan and Far East, many never to return to their homeland again (Davis, 1982).

Conditions in the places they were taken to were abhorrent – uninsulated barracks with no running water or sanitation. They were overcrowded and pest-ridden – a breeding ground for diseases. Thousands died due to hunger, illness, cold and exhaustion. The orphaned children remained.

When Hitler attacked Russia in 1941, Stalin announced an amnesty, setting all Polish citizens free and allowing a Polish Army to form within the Soviet Union.

Given permission to leave, most Poles went south to get away from another Siberian winter. Their destination was Uzbekistan where the Polish Army was forming in Guzari near the Afghan border. Many did not survive the journey.

Soon another problem became apparent and required immediate attention – the growing number of Polish orphans. According to Krolikowski (1983) “an estimated 75,000 children in various Polish centres in Russia needed instant help after the ‘amnesty’. To create an adequate number of proper institutions would require not only an enormous outlay of money but also an army of educators and nurses. Yet the possibilities were very limited. With much effort, mostly by the army and by branches of the Polish Embassy, 139 orphanages and nurseries were established in which approximately 9,000 children found shelter.”

In 1942, the Polish Army moved to Persia to join the Allies. Some 116,000 soldiers with their families and thousands of orphans were evacuated across the Caspian Sea from Krasnovodsk on the Soviet Union side to Pahlevi on the Persian side of the sea.

For some, freedom came too late and they died during the sea journey, their bodies thrown overboard. Others died shortly after arriving in Persia. The children were taken into Polish orphanages in Isfahan, where they stayed for two years, thanks to the hospitality of the Shah of Persia who made some of his palaces available to them.

In 1944, the Polish Army joined the British Forces and was moving to the front in the Middle East, North Africa, and Italy. Their families and thousands of orphaned children were left stranded in Persia and had to be moved to safer places. Some went to Kenia, India, Mexico, and Canada. A group of 733 were invited to New Zealand by the then Prime Minister Peter Fraser.

On 1 November 1944, an American troopship, the General Randall, sailed into the port of Wellington. It was carrying about 3000 Australian and New Zealand soldiers on their way home from the battlefront, and 733 Polish children with 102 caregivers.

The New Zealand Prime Minister, Peter Fraser, came on board, accompanied by the Polish consul-general, Count Kazimierz Wodzicki and his wife Maria, the Polish Red Cross representative in New Zealand.

It was Countess Wodzicka who came up with the idea of bringing a group of Polish children to New Zealand when in 1943 she visited a ship carrying a few hundred Polish orphans from Persia to Mexico. The ship had stopped in Wellington to refuel and to restock its food and water supplies for the second half of its journey. The countess was deeply moved by the plight of these children who had been through so much at their young age, and once she realised there were thousands more orphans stranded in Persia she decided to do something about it. She talked to Janet Fraser, the Prime Minister’s wife, about the possibility of a similar scheme for this country, and the idea soon became a reality (Skwarko, 1974).

When Mrs Fraser appealed to her husband for help with this project Peter Fraser embraced the idea wholeheartedly and agreed to invite a group of about 700 children (the number later grew to 733), plus enough adults to take care of them, offering them shelter in New Zealand until the end of the war.

A former POW (prisoner-of-war) camp in Pahiatua became their home for five years. Although their army barracks accommodation was rather spartan, all children had their own bed with a pillow, a blanket and clean linen – luxuries they’d had to do without during their exile. For the children, the Pahiatua camp was like heaven on earth – home away from home which they referred to as ‘little Poland’.

All education at the camp was delivered in the Polish language with English taught only twice a week: the expectation being that after the war they would all return to Poland. However, fate had a different plan for them.

When the war ended in 1945, the heads of governments of the United States, the United Kingdom, and the Soviet Union met at the Yalta Conference to discuss the post-war reorganization of Germany and Europe. Poland’s eastern borderlands were given to the Soviet Union and Poland became one of the Soviet communist satellite states. The children had not only lost their families but also their homes and country.

Soon after the war’s end, the Consul General of Poland, Dr K. A. Wodzicki, in cooperation with the Polish authorities in London and the New Zealand Government, formed the Guardianship Council for the Polish children in New Zealand, comprised of three New Zealanders and five Poles, approved by the highest court in New Zealand in May 1945 (Roy-Wojciechowski, 1999).

The New Zealand government showed incredible generosity in giving all residents of the Pahiatua camp the option of returning to Poland or staying in New Zealand. The camp would remain open until placements were found for the children at boarding schools or with New Zealand families.

Only about 10% of the Pahiatua inhabitants returned to Poland to be reunited with family members who had survived the war. The remaining children stayed in New Zealand. As older children were leaving to start high school, gradually, the camp began to empty.

Wojciechowski (1999) notes that “in 1947 and again in 1948 the Warsaw regime (the Communist regime dominated by USSR) demanded that the children be returned to Poland, but the New Zealand Government refused.”

In 1949, five years after its inception, the Pahiatua Polish Children’s Camp was finally disbanded when all children had been transferred to foster families or boarding schools.

The youngest boys ended up in Hawera Polish Boys’ Hostel, and the youngest girls were moved to the Polish Girls’ Hostel, Ngaroma, in Lyall Bay, Wellington.

New Zealand is one of around 37 countries that take part in the United Nations High Commissioner for Refugees’ (UNHCR) regular refugee resettlement programme. Since 1944 more than 35,000 refugees have arrived in Aotearoa. The country’s refugee quota increased to 1500 last year – but that target hasn’t been reached because of the Covid-19 pandemic (NZ Immigration, 2021).

The Polish orphans were the first refugees distinguished from other immigrants in official New Zealand statistics. Today, those still alive are in their 70s and 80s and all are grateful to their adoptive country. They proudly refer to themselves as Polish Kiwis.

Sources: 1. God’s Playground A History of Poland, Volume 2, 1975 to the present 2. Stolen Childhood – A saga of Polish War Children 3. The invited: the story of 733 Polish children who grew up in New Zealand 4. Pahiatua children, Polish Heritage Trust Museum