"The straight line leads to the downfall of civilisation." - Friedensreich Hundertwasser, 1953.

Friedensreich Hundertwasser loved New Zealand. Born Friedrich Stowasser in Vienna, 1928, he first came to New Zealand in 1973 - a time of common and easy journeying around the world. He was invited as guest of honour to the city of Auckland and the City of Auckland Art Gallery. Here, an exhibition of his works, that would later tour the country, took centre stage.

“The straight line leads to the downfall of civilisation.” – Friedensreich Hundertwasser, 1953.

Friedensreich Hundertwasser loved New Zealand. Born Friedrich Stowasser in Vienna, 1928, he first came to New Zealand in 1973 – a time of common and easy journeying around the world. He was invited as guest of honour to the city of Auckland and the City of Auckland Art Gallery. Here, an exhibition of his works, that would later tour the country, took centre stage.

Hundertwasser on occasion of reading the ‘Mouldiness Manifesto against Rationalism in Architecture’, 1958
© 2021 Namida AG, Glarus, Switzerland

Known as an artist, architect, ecologist, philosopher, and visionary, his work was particularly prolific during the Paris avant-garde art movement of the ‘50s. Hundertwasser pushed away structural and artistic conformity to embrace the natural nuances of an organic style, celebrated and respected globally. His Mouldiness Manifesto Against Rationalism In Architecture at the international art and architecture symposium in Seckau, July 1958 argued that the “straight line is godless and immoral” and that “in it, God and the human spirit are less at home than the comfort-craving brainless intoxicated and unformed masses.”

Revolutionary words – and evocative of Hundertwasser’s unique creativity, which was vibrant, curvaceous, playful, and individualistic. His originality is perhaps best represented as The Painter King with the Five Skins. Each layer of man’s five ‘skins’ (epidermis, clothes, houses, identity, earth) offers the freedom to find, express and inhabit one’s original truth, creativity, identity, and diversity in harmony with the Laws of Nature. This stance also depicts Hundertwasser’s concept of the concentric spiral of human life and death.

There’s been much written on his famous tourist attraction, the Hundertwasser-designed public toilet block in Kawakawa, New Zealand. This community rejuvenator was completed in 2000 – the year Hundertwasser died. To commemorate the anniversary of his death on 19 February 2000, the doors of another kind of tribute will be flung open on 20 February 2022: the $30 million Hundertwasser Art Centre with Wairau Māori Art Gallery.

The incorporation of contemporary Māori art within the Centre was one of Hundertwasser’s early requests in recognition and respect for the creativity of the Māori. Translated, Wairau means One Hundred Waters as does Hundertwasser in the German language. The Centre is a collaborative endeavour between the Hundertwasser Non-Profit Foundation (HNPF), Prosper Northland Trust, Wairau Māori Art Gallery Trust, and Whangārei Art Museum Trust (now the Hātea Art Precinct Trust) which has received approval and accolades from locals and public nationwide. 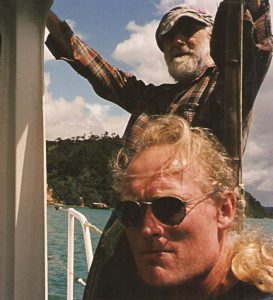 The New Zealand representative for the HNPF is architectural designer and builder Richard Smart. He talks about his relationship with Hundertwasser during an eight-year association with the artist.

Disclaimer: “Anything I say is not the official opinion or statement of the Hundertwasser Non-Profit Foundation. You are asking me my personal view or recollections. I am not an Art Critic or academic expert on Hundertwasser.” – Richard Smart.

Where did you meet Hundertwasser?

Hundertwasser required some building work to be done at his [Bay of Islands] property. Someone who knew me and [recalled] that I had gone through a Steiner education thought I might be a good fit. I was keen to be involved. I never knew much about Hundertwasser at that time other than he was a famous internationally known artist. I was in awe of the few graphic works I had seen.

Why did you connect so deeply?

Creativity. Patience. Respect. Being involved with someone so creative, even if only touching the outside fringes of his world was inspiring. Hundertwasser never forced or preached and demanded vocally. When I did something wrong, I would have to do it again and again until I had it right. One came to the realisation he was right in everything he did. Being able to learn and observe under the scrutiny of such a special person became life-changing. Hundertwasser was very particular but, at the same time, allowed personal creativity to be included in what I did for him. An honour and a privilege.

Why did Hundertwasser change his name from Stowasser?

To Hundertwasser, it was obvious that when somebody wants to be himself, he finds a new name that corresponds to himself. He thought everybody should name themselves. The name Hundertwasser would therefore be his expressed self-image as an artist and relate to the meaning of the colours in his works (watercolour) and his love for water as a natural element. He actually had many names for himself, all expressing this self-image.

Was Hundertwasser your greatest inspiration?

Inspiration for what? Perhaps insight? Intellectual enrichment? Life? One never ceases to learn from Hundertwasser. Even now. Hundertwasser has been the single most influential individual in my life. Other than my mother and father, of course, but that goes without saying! It did not end with his untimely death. The ‘family’ I have had the sheer good fortune to continue to be included with constantly enriches my life and provides further opportunities I would never have dreamed of were it not for my meeting Hundertwasser.

Does the best advice you’ve ever been given relate to your commitment to Hundertwasser?

It would appear contrived to claim some single phrase or quote. Advice is extracted from the experiences you encounter and is perhaps built up over decades. Advice from Hundertwasser? One thing comes to mind of a practical nature. On the very first day I started working for Hundertwasser, he told me to put away my spirit level and use my eye. He said if it looked optically correct then, that was perfect, and that is how I must build for him. ‘Your eye is the best tool you have.’

How would you describe his work?

I could seek out words such as ‘profound’ etc, but really, each individual will have a different take. For me, his art is free, joyful, expressive, and importantly, it is pure in its honesty. Hundertwasser never adjusted to popular fads or fashions. He was totally independent and original. He followed his own path with courage and conviction.

What did his theory of ‘transautomatism’ and the associated ‘tao’ mean?

Automatism in art means that the process of making art takes place spontaneously, in a movement or gesture that is not influenced by consciousness or will. Hundertwasser advocated overcoming this art form with transautomatism with a slow conscious-unconscious creation of art; art-making as an equivalent to the creation of nature. However, transautomatism also includes the inclusion of the viewer and his interpretation of the artwork. Only through the interpretation by the viewer does the tao (= trans-automatic object = work of art) become complete.

He is a blend of architect, artist, philosopher, graphic designer, and environmentalist. How do you see these complementing each other?

I would say nature and creativity connect all things. Hundertwasser drew his creativity from Nature. His architecture reflected Nature. He compared his art to nature as a reference. His graphic work was also inspired by nature in its diversity, his ambition to be able to create, for example, multiple prints of the same edition with every one being different. Over 10,000 in one edition. With nature as his icon, his inspiration, everything he did under its mantle was connected.

His early exploration of nature-based architecture is now being observed as an environmentally-relevant way forward for our society. How so?

Even if there does not seem to be any direct or immediate influence, every ‘ecological’ or ‘green’ architecture in which green roofs, green facades are understood as a standard and a necessity, has to do with the exemplary effect of Hundertwasser’s architecture. He also stands in a tradition of organic architecture in which the inclusion of nature, organic lines and forms and natural materials are important. He definitely is a major contributor to the acceptance and validity of architecture in harmony with nature which has now finally become mainstream and practised today. 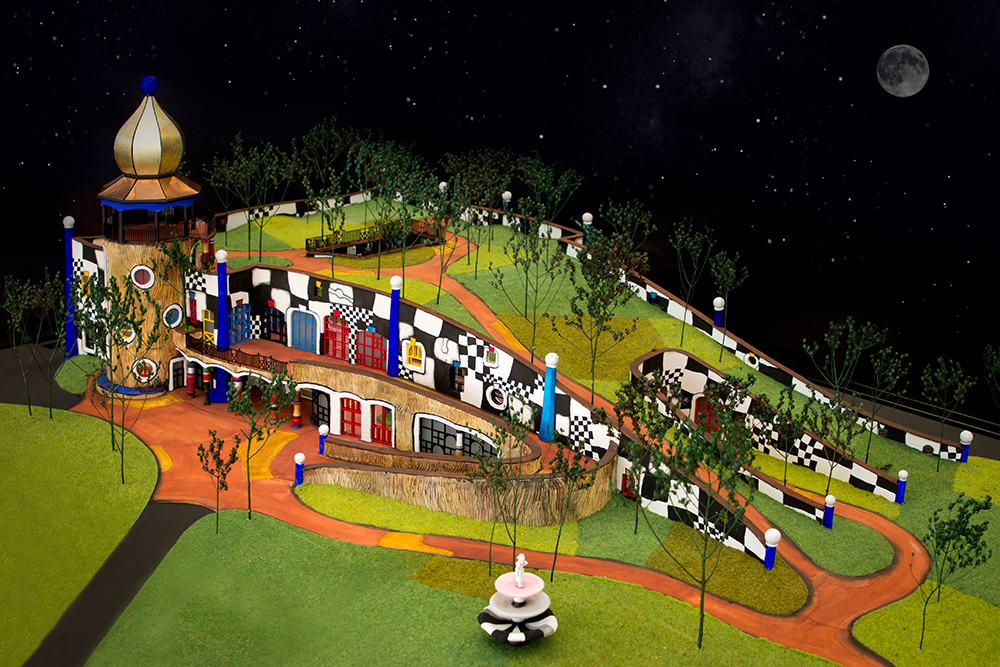 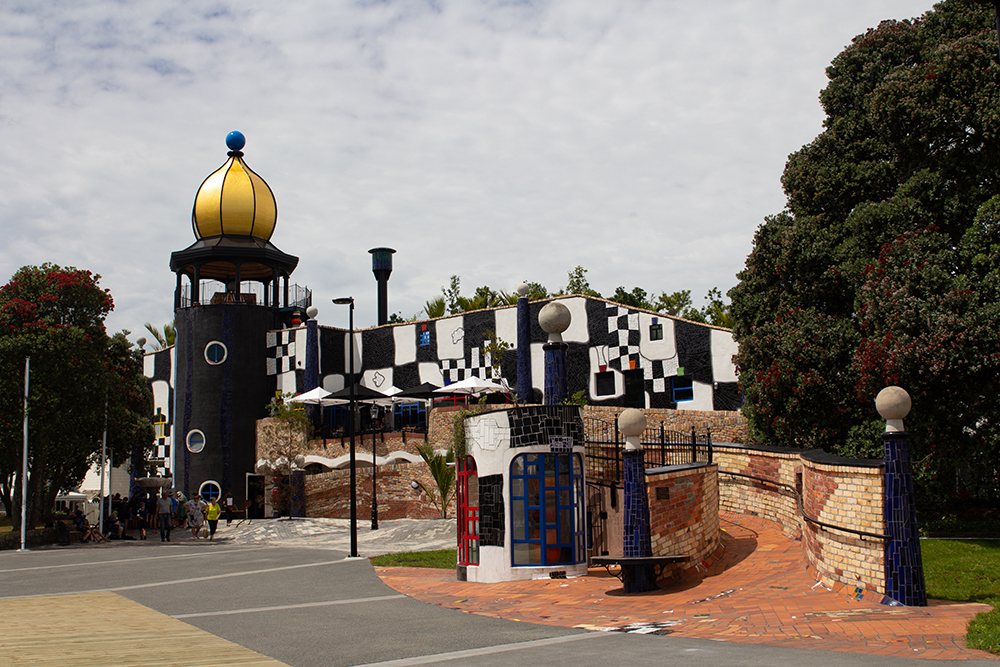 Why was his signature ‘spiral’ graphic so valid?

Perhaps not a signature but a recurring feature. For Hundertwasser, the spiral was a symbol of birth and death, and he loved it because it counteracted the straight line. Furthermore, it is a motif that connects art and nature. Many plants and some animals have spiral structures in their blueprint. Spirals have been important ornamental motifs in art since prehistoric times. Spirals convey an idea of infinity. The spiral is abundant in nature in New Zealand and strongly reflected through indigenous culture, too.

Was the poster he designed for the New Zealand Conservation Week in 1974 his first foray into this country?

It was his first of many gifts to New Zealand and, importantly, marked a decisive turning-point in his public commitment to ecology. He joined Conservation Week, thus inaugurating his first ‘poster campaign’ for the protection of the natural environment. His environmental posters were printed in large editions, and the sales proceeds were donated to environmental initiatives and environmental organisations.

What did he love about New Zealand?

He loved the nature, the simplicity, and he had, since a child, wondered about New Zealand. His mother would tell him stories about the land on the other side of the world where it was day while he slept. New Zealand became a sanctuary for him. A place to rest and paint in nature. A place he could experiment with his thoughts about art and architecture.

Where do you see the Hundertwasser Non-Profit Foundation heading over the next five-ten years?

The role of the HNPF will remain the same. Hundertwasser, together with his long-time manager and friend Joram Harel, set up the HNPF during Hundertwasser’s lifetime. It was set up for a specific purpose, which was to protect his legacy, his identity, his rights. Also, to continue to promote his thoughts and philosophies on art and ecology.

What do you feel are the most important aspects of his work?

I think, here in New Zealand, there is a lack of knowledge about his dedication to making our current lives and planet a better place. Hundertwasser is not just a hippie-era artist who did well. He fought for everything that will make ourexistence better, not his own. Everything was about the future. Our future. He explained a path to achieve a better outcome in life by respecting nature. Learning from Nature. He advocated respecting nature and to avoid the blind rush to destruction. He was saying this from the ‘50s. It is more relevant now than ever.

The Hundertwasser Art Centre with Wairau Māori Art Gallery is located on the waterfront next to Hātea River in Whangārei City and is now open to the public.