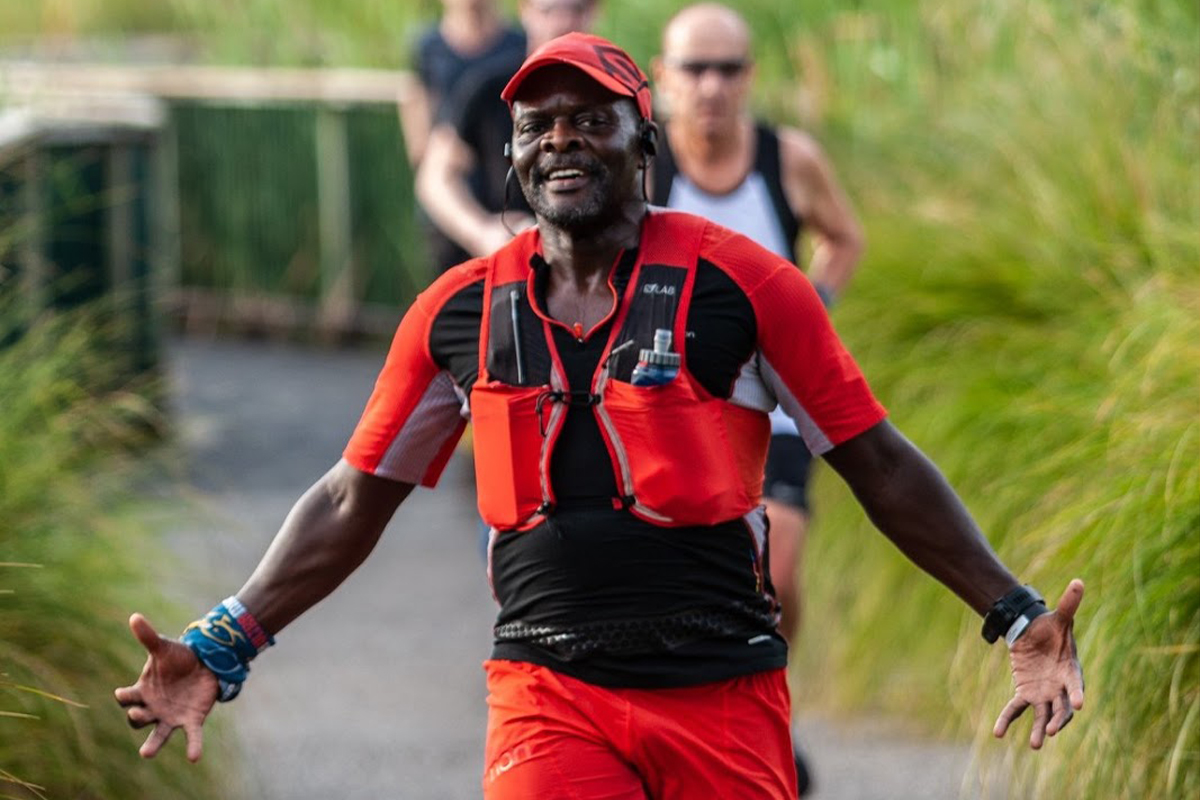 By Katie Stone Reading time: 12 minutes One bright Saturday morning back in March, Mgcini Masuku went for a run. He started at 6am. He finished on Monday morning, some 44 hours and 161 kilometres later. Despite starting on just three hours’ sleep, getting lost in the middle of the night, and hallucinating about lions and pythons, he thoroughly enjoyed himself. After all, he’d done it nine times before. “It was very hard. But it was the best feeling I’ve had after finishing a miler,” he says. The ‘run’ was the Northburn 100, one of New Zealand’s toughest 100-mile trail running events. Every year, competitors from all over the country and around the world pit

One bright Saturday morning back in March, Mgcini Masuku went for a run.

He started at 6am. He finished on Monday morning, some 44 hours and 161 kilometres later.

Despite starting on just three hours’ sleep, getting lost in the middle of the night, and hallucinating about lions and pythons, he thoroughly enjoyed himself. After all, he’d done it nine times before. “It was very hard. But it was the best feeling I’ve had after finishing a miler,” he says.

The ‘run’ was the Northburn 100, one of New Zealand’s toughest 100-mile trail running events. Every year, competitors from all over the country and around the world pit themselves against 32,808 feet of rugged Central Otago mountain terrain, climbing and descending to the finish line before the 48-hour cut-off time.

When Mgcini finally rolled over the finish line, he’d seen two sunrises and two sunsets. He also plans to do it all over again next year.

Clearly, Mgcini is no ordinary Kiwi. And, 18 years ago, he was not a runner.

Mgcini arrived in New Zealand from Zimbabwe on January 6, 2003. He was 32, and he’d had enough of the ongoing political and economic turmoil of his home country. The situation had worsened throughout the early 2000s, and Mgcini wanted better for his family.

With plans for his wife and 4 year old son to join him once he was settled, Mgcini arrived in Auckland alone and began looking for work. After landing a job as a telecommunications technician, he moved to Rotorua.

Living alone in a tiny bedsit, far from everything he’d ever known, those first few months weren’t easy: “It was horrible. I was just trying to get myself settled, save some money, and get my family some plane tickets and visas,” he says. “There was quite a long delay with the visa processing, which made the whole thing really frustrating. And it was so cold here!”

By September, the visas and flights for his wife and son were arranged and they were finally reunited. They moved to a bigger flat and began to ease into their new life.

Despite the initial culture shock, he felt they’d made the right decision. “Everything just seemed laid back,” he says. “People were so nice. My family had just come from a place where it was tough to survive. Now we felt we were in a good place, having a good life.”

Although homesickness was never far away, he and his family were able to maintain many aspects of their former life. They bonded with other Zimbabwean families who had migrated to Rotorua, joining them in ethnic soccer competitions and traditional celebrations. They were even able to source many of their dietary staples at local African stores and supermarkets.

His first impression of standard Kiwi cuisine was a little less favourable. “The taste of some foods was awful!” he laughs. “The beef especially – I thought it was awful. But some foods were really good. Fruits are so delicious here, especially your apples. So good – they really hit the spot.” And although his palate has now adjusted somewhat, Marmite is still not a winner. “We tried it, but… nah. At the end of the day, it’s something you have to grow up with.”

In 2006, the promise of more lucrative opportunities in Australia beckoned, and Mgcini left New Zealand for a year-long stint across the ditch. Again, the idea was to find work and then bring his family over. But before he could decide whether Australia’s pastures were indeed greener, a job was offered in Hamilton. So, back to New Zealand he went, and the family moved again – this time for good. His son started at the local high school, and his wife enrolled in a nursing degree at WINTEC, later becoming a social worker.

“Hamilton is great,” Mcgini says. “It’s got everything. It’s not a small city by New Zealand standards, but it’s big enough. It’s close enough to Auckland, and you can go to the beach at Raglan or Waihi. It’s very central.”

There was just one thing he wasn’t happy with: his weight. “I couldn’t see my waist belt; I couldn’t tie my work boots without dripping sweat. I just felt so unfit and overweight. I hated myself.”

Running seemed like a good option, so he decided to start with an easy 3km. “I got to five hundred metres and had to turn around,” he laughs. “It took me another two months to try running again.”

The treadmill was his next attempt. For every 20 minutes, he would have to sit down for another 20 to recover. But he persevered, and eventually began running 5k every two or three days, along with playing business house football every Sunday.

By 2008, he was ready to try a race. Hamilton’s Round the Bridges seemed a good start, but he was told that his chosen distance – the 2.5km – was actually the children’s event!

Undeterred, he signed up for Auckland’s Round the Bays the following year, and surprised himself by completing the whole 8.4km. A half-marathon was next on the cards, and in 2010 he ran the Huntly Half, finishing in just under two hours (which he thought was ‘terrible’!).

With his 40th birthday looming, he signed up for the Rotorua marathon. It didn’t go well. “It nearly killed me,” he laughs. “I swore I’d never do another marathon.” But the very next year, he signed up again. And every year after.

By 2014, marathons weren’t enough. Inspired by the likes of American ultramarathoner Dean Karnazes and New Zealand’s own Lisa Tamati, Mgcini got himself a coach and began doubling and tripling his distances: Lap the Lake (60km), and Tarawera Ultra Marathon (76km and 100km).

Then came the kingpin of the ultrarunning scene: the 100-miler.

For most of us, it’s almost impossible to comprehend the magnitude of a 100-mile race. It involves running the entire distance in one go, usually within a time limit of 36-48 hours. There are time cut-offs along the way, which means competitors must keep moving throughout the night. They are also required to carry any supplies they might need: clothing, food, drink, and first-aid.

Mgcini’s first 100-miler was to be the 2015 Great Naseby Water Race, held every August near the tiny gold-mining town of Naseby. The course comprises a formidable figure-8 of gravel road and forest tracks. Miler competitors must run 16 loops of the course, often battling rain, fog, mud, and snow. Despite the brutal weather and a particularly bad case of chafing (“I thought I’d need skin grafts!”), Mgcini made it to the finish line in a time of 33.38 hours. Having claimed his first belt buckle, his first thought was: “I could probably do it again.”

That was six years ago. Now aged 50, Mgcini is quite rightfully something of an ultra-veteran. Known for his 1000-watt smile and inexhaustible determination, he is one of the most respected and admired faces on the trail. He has acquired a number of roles in local running events, including Run Director at Hamilton Lake parkrun, an organizer for pacers at Rotorua Marathon, and committee member for the Kirikiriroa Marathon.

With 10 hundred-mile races under his belt – plus a staggering 200km race in 2018 – he has no intention of stopping. His next race will be the new 200-mile at Naseby in August, followed by the 24-hour Sri Chinmoy track race in November. With each race, his goal is simple: to go back and improve on his previous time.

But it’s not just about finish times, or even collecting titles. What began as a bid to get fit has evolved into something much bigger: “Running has helped me integrate – especially trail running,” he says. “It’s about sharing adventures with like-minded individuals from different walks of life.”

There are times, of course, when he misses home – especially now that many of the friends who also migrated here have left for bigger and better things in Australia. Mgcini estimates that over the past decade, around 95% of the local Zimbabwean community has disappeared over the ditch. Sadly, despite numerous attempts, none of his family in Zimbabwe has been able to join him in New Zealand. His brother, sisters, and their families remain back in their home country. Mgcini has managed to visit home just three times in the last 18 years. “It is near impossible for siblings to have their visas approved by immigration. We have given up!” he tells me.

But what he has not lost, is a community. The ‘fellow crazies’ of the ultra-running crowd have become his people. The camaraderie – and the sense of adventure that comes with every race – is more than a panacea for his homesickness. Why else would anyone run up and down mountains for hours on end with only a belt buckle as a prize?

New Zealand’s trails might not be for everyone. But for Mgcini, they are a place to belong. “Time is a healer. With time, you get more and more immersed into the Kiwi way of life,” he explains. “And one of the best things is that you can go exploring and running here with no snakes or wild animals to worry about!”