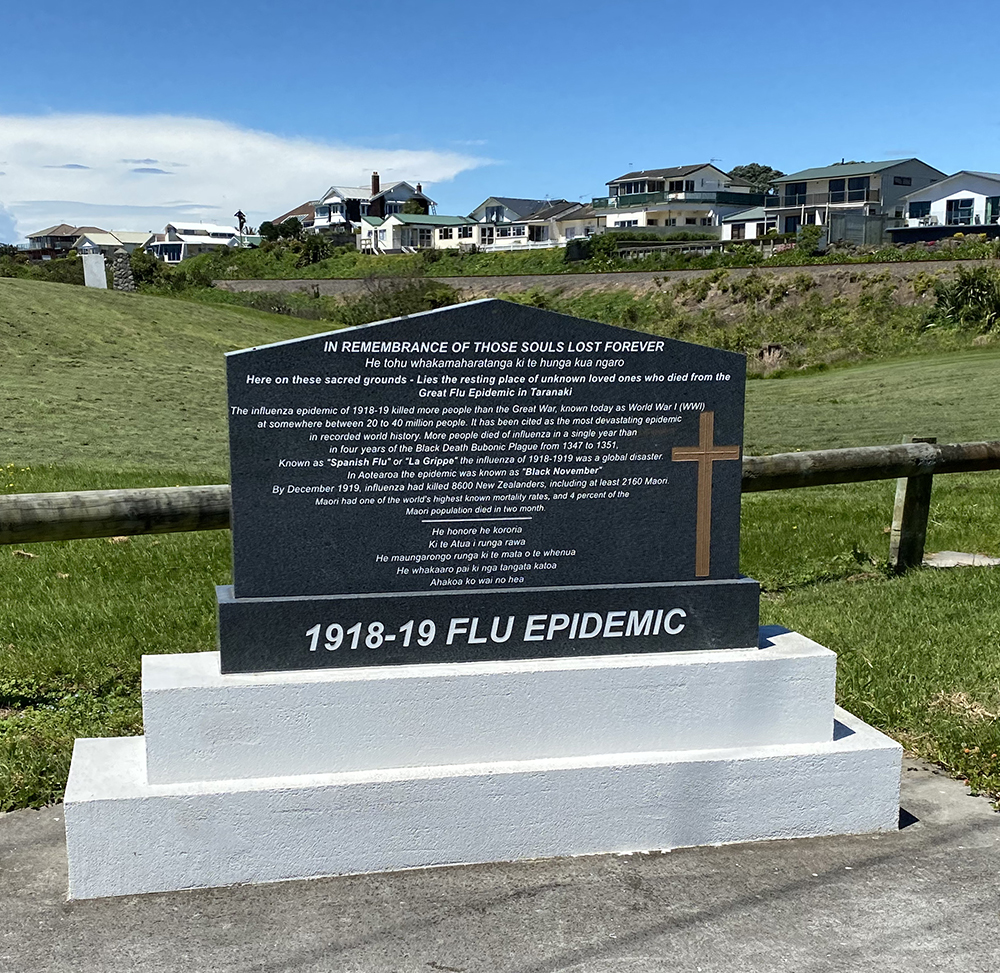 Tītiro whakamuri, kōkiri whakamua, look back and reflect so you can move forward, seems an apt whakatauki (proverb) to quote as we wrestle with the impact of the COVID pandemic across our society, not just in Aotearoa/New Zealand but globally.

The lesson to be shared from this quote is that if we don’t learn from the past, we are likely to make the same mistakes. There are many forgotten memorials to past epidemics that, when we investigate their story, show us we are at risk of repeating the wrongs of our colonial past.

When COVID first hit our country in 2020, the impact across the Māori community was not as severe as initially feared. Māori tribal, health and community leaders had all spoken of the devastating impact of the 1918 Spanish Flu (Influenza Epidemic) when it swept across the nation, after shiploads of soldiers returned from the First World War campaign

Tītiro whakamuri, kōkiri whakamua, look back and reflect so you can move forward, seems an apt whakatauki (proverb) to quote as we wrestle with the impact of the COVID pandemic across our society, not just in Aotearoa/New Zealand but globally.

The lesson to be shared from this quote is that if we don’t learn from the past, we are likely to make the same mistakes. There are many forgotten memorials to past epidemics that, when we investigate their story, show us we are at risk of repeating the wrongs of our colonial past.

When COVID first hit our country in 2020, the impact across the Māori community was not as severe as initially feared. Māori tribal, health and community leaders had all spoken of the devastating impact of the 1918 Spanish Flu (Influenza Epidemic) when it swept across the nation, after shiploads of soldiers returned from the First World War campaign carrying the deadly disease. Many Māori rural communities only have a singular tombstone as a memorial to their relatives who were buried in mass graves. They’re a reminder of the tragedy where whole families were wiped out and where Māori death rates were nine times higher than European rates and potentially under-reported. Yet over the generations, only those closely connected to that history remember the significance of those memorial stones.

Ironically for many Māori and the general population, as information around COVID permeated our daily news feeds, we were also hearing about the 1918 Spanish Flu epidemic, for the first time. When the details of the death toll from that epidemic – 6,600 Pakeha and around 2,500 Māori – were shared across our media channels, it demonstrated once again that our country is not very good at telling its own history.

In an opinion piece in the NZ Herald on 15 October 2021, Dr Rawiri Taonui, an independent writer, researcher, and advisor on Māori and indigenous human rights, laid out the stark reality of how Māori have suffered disproportionately in every pandemic-epidemic event that has hit our shores since colonisation:

“During the 1913 smallpox epidemic, Māori leaders begged the government for life-saving vaccines. The government produced more than 750,000 doses. The vaccine was frequently given to Europeans in towns first, with the remainder distributed to Māori. Gisborne received only 200 doses of the vaccine for a community of 12,000 Māori and Pākehā. The Waikato community at Taupiri, where there was a serious outbreak, received only enough to vaccinate 80 of 300 Māori who lived there. The Hokianga (Northland) received none.”

His research outlines a series of pandemic and epidemic events in Aotearoa since 1769, when Captain Cook estimated that the indigenous population was around 100,000. Introduced diseases of syphillus, gonorrhea and tuberculosis; changes to diets, food sources and habitat; land wars and subsequent land loss, all meant that by the 1858 census, the Māori population had declined significantly to around 60,000. The typhoid, smallpox, measles, and scarlet fever epidemics that followed in the 1870-1880 decades saw the Māori population reduce even further to 40,000.

For Dr Taonui those early years of colonisation meant that “our people began to live life in a state of permanent epidemic.”

This concept of the pending demise of the Māori race was popularised in 1901, when the mayor of Auckland, Sir John Logan Campbell, gifted his suburban farm, named One Tree Hill, to the people of New Zealand. He also left a significant sum of money to build a monument in memoriam to “the great Māori race” who he had first encountered in 1840.

A statue of a ‘bronze figure of a Māori chief in heroic mould’ was created by local sculptor Richard Gross to stand on the corbel at the base of a 33 m concrete column on the summit of the volcanic cone. Known by Māori as Maungakiekie where, before settlement, the native vine Kiekie grew in abundance, it was also the place where the prominent Waikato chief Pōtatau Te Wherowhero had laid his ‘korowai (cloak) of protection’ over the new settlement of Auckland – making the hill a sacred place.

The obelisk (tapered monolithic pillar) was officially unveiled on April 24, 1948 by the Māori King, Korokī Te Wherowhero, attended also by Ngāti Whātua Orakei leaders and other Waikato iwi representatives. Rather than acknowledging a memorial to a dying race, the gesture by the Tainui rangatira was probably more in recognition of his ancestor’s reach in terms of identifying the territory of Tainui, ‘Ko Mōkau ki runga, Ko Tāmaki ki raro’. Mōkau refers to the river in North Taranaki and Tāmaki to the isthmus on which the city of Auckland stands. Perhaps his attendance was more a statement about the indelible presence Māori have on the landscape that will never be erased.

However, the history of the importance of vaccinations for our whānau, hapū and iwi has almost disappeared from the collective conscience across the general Māori and wider New Zealand population. Dr Taonui believes this speaks more to an ongoing malaise in the country’s consciousness around Māori health issues and the inter-generational entrenchment of deep-rooted disparities across our communities.

We don’t have to look back far to see how a proactive stance by Māori public health professionals has been ignored by successive governments. In his online address to the International COVID-19, Indigenous Communities, Health Sovereignty and Working Together for Change conference held in May 2021, titledPandemic Lessons from Aotearoa – Racism is the Real Virus, Dr Taonui presented evidence of how systemic racism had affected the way resources, vaccine distribution, data collection and reporting had taken place were historical realities that continued to be played out in the 2021 pandemic response

Access to data became an important legal point when on 1 November 2021, Whānau Ora Commissioning Agency won an urgent judgement in the High Court to get access to Māori data from the Ministry of Health, district health boards, and public health organisations.

In his fight to improve Māori vaccine rates, chief executive of Te Whānau o Waipareira John Tamihere challenged the official response from government agencies to not share their data, a battle he said they had been having for the last six months.

Having vaccinated over 510,000 individuals to date, 90% of whom are non-Māori, his organisation’s focus is now on finding out where those unvaccinated Māori whānau are, so they can give them the right information to make informed decisions – in essence providing a ‘By Māori, For Māori’ response.

Some sceptics might say that the recent announcement to fund iwi and whānau ora organisations across the country to the tune of $120m to mobilise and improve vaccinations in rural and socially deprived communities is a step in the right direction, though somewhat late.

This belated investment will hopefully mitigate much of the misinformation that exists. Despite the struggles faced by Māori public health advocates such as Dr Taonui, to undo the negative impact of misinformation, his research also showed that this behaviour has its roots in the history of colonisation in New Zealand. A general lack of trust in the government which has evolved over generations can’t be overcome in a short period of time, no matter how well-meaning present day politicians and bureaucrats are.

“Vaccine hesitancy has long been tied to distrust of colonial systems. In circumstances where there’s been marginalisation and experiences of racism, there’s been an element of distrust over vaccines,” Dr Taonui says. “Early on in the history of vaccinations in Aotearoa, where Māori had a good relationship with Pākehā, they tended to take up vaccines. But in areas where the relationship wasn’t so good and they were suspicious of the motives of Pākehā, they tended not to.”

He says that’s partly why there’s a higher level of rejection of vaccinations today among Māori generally, including infant immunisations and flu vaccinations among kaumatua (elderly). 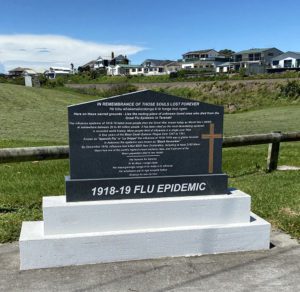 In November 2018, 100 years after the Spanish Flu epidemic – also known as ‘Black November’ – Taranaki monumental mason Callum Mahy worked with local hapū Ngāti Te Whiti to erect a stone at Waitapu Urupa near Ngāmotu Beach, New Plymouth. Though the names and numbers of the people in the unmarked mass grave are unknown, the memorial stone is to commemorate those buried there, and across Taranaki, as a result of falling victim to the epidemic. At that same time, over in Wuhan China, medical professionals were starting to catalogue the human cost of a new virus that would within months shut the whole world down.

Hopefully, in the future, we will listen to our Māori health professionals more, and as a result, we will not have to build any more memorials of life-changing moments in time, that may well become forgotten.

Sources: 1. Pandemic Response in Aotearoa: Racism is the real virus, covid19indigenous.ca 2. Why should Māori trust the Covid-19 vaccine?, rnz.co.nz