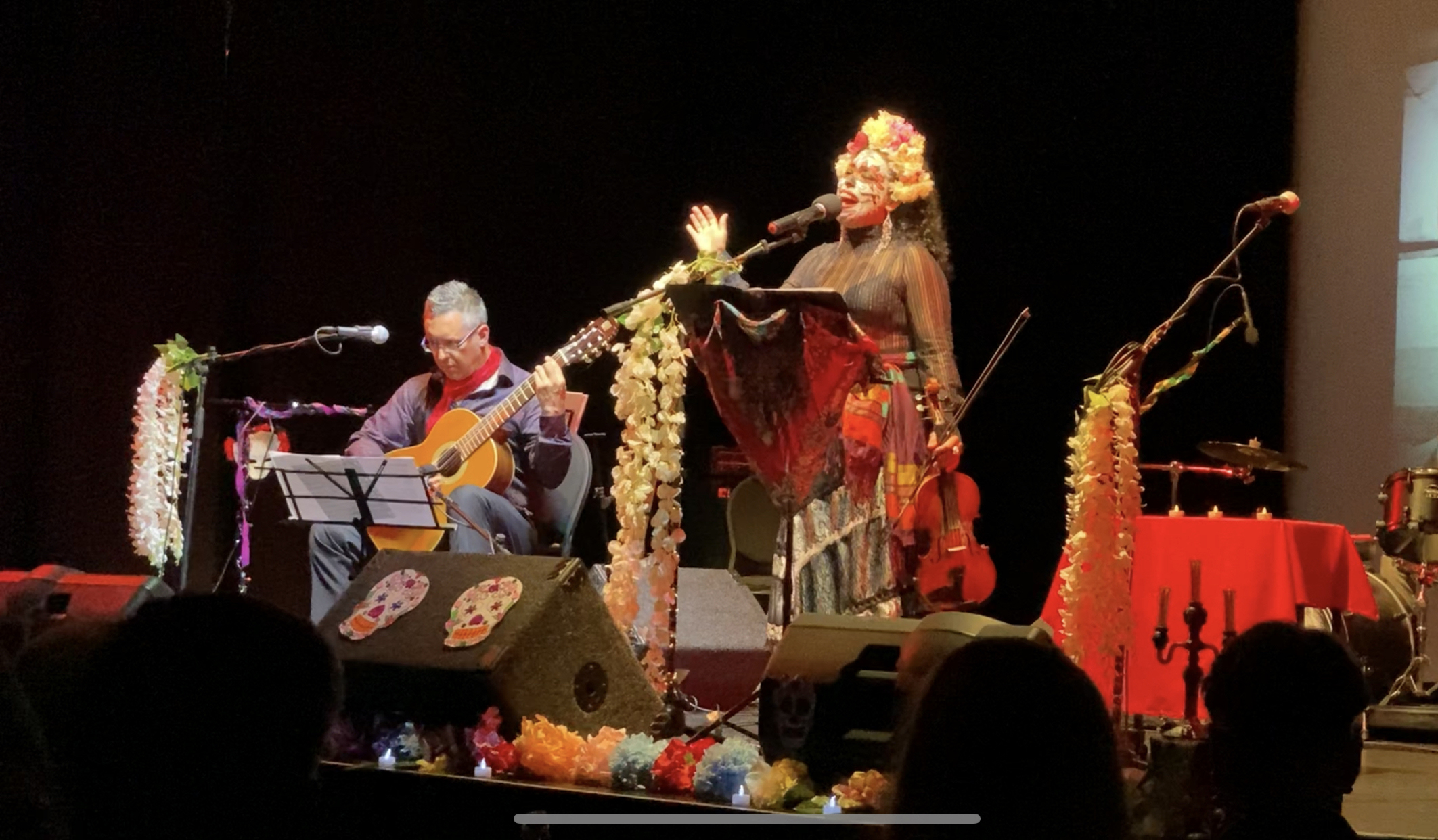 Friday the 13th of November was the celebration of Life for Mireya Ramos, a well known Latina musician in New York City. She has performed with great artists like John Legend, and started the first all-women Mariachi group “Flor de Toloache”.

Mireya originally came to New Zealand with the intention of performing at Womad. Unfortunately the global scenery changed, and she has been in Taranaki since then with her partner Andy Averbuch. When things go wrong there is always a positive side, and Mireya knows that. This is when she got the idea of organising the Latino Fiesta.

We were so lucky to be able to meet with Mireya and Mauricio backstage for an interview while the performers were warming up, rehearsing and putting on their makeup (it’s pretty audible but all part of the vibe!)

Backstage at the 4th Wall Theatre in New Plymouth, with some of the performers

The show started with Mauricio Olivera, a Chilean musician, resident in New Plymouth. Mauricio has been a musician for a long time, working in bars and other venues in Chile and Spain. Currently he is not playing in a particular place, but he was more than happy to be part of this incredible bunch of musicians in this Latino Fiesta, singing with Mireya. His music is inspired by important artists like Victor Jara who created music with a very good tale in some of his lyrics.

We all stopped breathing for a second or two when Mireya started singing with her wonderful voice and her colourful range of sounds, while playing the violin. Her music was predominantly folk, mariachi and Spanish songs. It was a night to remember with a Mexican flavour but with a very international mix of people, some of whom turned up in costumes, face painting and with flowers in their hair.

In our interview Mireya mentioned that one of the better experiences from New Zealand she will take with her, is the “people”. She enjoys collaboration with different artists which we all could see on the stage where Mireya was joined by her partner Andy, Barbora Varnaite, Juliet McLean, Renee Millner, Waru Hetet, Blake Gibson, Matt Sagen and more. We had been very fortunate to encounter such a great group of people working together exchanging cultures, music and languages in New Plymouth.

Mireya Ramos, a friendly and beautiful woman with a big smile and amazing voice, happy to listen and hug everyone who approaches her is also working on a solo album at the moment. She will keep performing in different cities like Wellington this weekend, and maybe some more. Some future events in New Plymouth include Christmas on the beach and Christmas In The Park. To listen to her exquisite and angelic voice and watch her performances is worth every second and is bound to pull your heart strings. Make sure you don’t miss the opportunity and be part of Mireya’s audience while she’s still in New Zealand to let her move your soul.