Corsets then and now: from medieval torture to modern fad

There’s been a lot of speculation on corsets making a comeback in 2021. More and more people are seen wearing them as part of their everyday wardrobe, and fashion brands have started creating corset-like tops and blazers. Thanks to various celebrities, the popularity of corsets has skyrocketed despite being shrouded in controversy in recent times. But how do corsets nowadays compare to those worn during previous eras of fashion?

The earliest known example of a corset was found on a Minoan art figurine circa 1600 B.C. made during the Bronze Age in Crete, ancient Greece. The statue depicts a woman wearing an outer garment that could be perceived as a corset, with her breasts exposed.

There’s been a lot of speculation on corsets making a comeback in 2021. More and more people are seen wearing them as part of their everyday wardrobe, and fashion brands have started creating corset-like tops and blazers. Thanks to various celebrities, the popularity of corsets has skyrocketed despite being shrouded in controversy in recent times. But how do corsets nowadays compare to those worn during previous eras of fashion?

The earliest known example of a corset was found on a Minoan art figurine circa 1600 B.C. made during the Bronze Age in Crete, ancient Greece. The statue depicts a woman wearing an outer garment that could be perceived as a corset, with her breasts exposed.

Both Minoan men and women wanted smaller waists, sporting leather belts and vests with leather straps that shaped the torso. Grecian women wore an elaborate, stiff girdle called a ‘zona’ on the outside of their clothes. It helped to make a woman curvier – which was the ideal shape during the time – and exposed the breasts. As young girls, they were put into girdles that were gradually tightened as they got older to stop their waistline growing.

For centuries, various tribes based around Turkey and the Middle East called the Caucasus, used corsets to ‘beautify’ women and ensure modesty. Corsets were laced up tightly, oftentimes having fifty laces, and young girls and women would wear them from childhood to marriage. When the marriage was to be consummated, the groom had to undo every single lace to show restraint and self-control.

Historians are unsure whether the corset was worn during the Middle Ages, though in the 14th and 15thcenturies, women were known to wear girded cottes meaning ‘on the rib’ or tunics. At the end of the 1400s, women wore bodices reinforced with stiffened and strengthened fabric, sometimes with brass wires. Interestingly enough, the word corset was not used until the 19th century; prior to that, the term was stays.

French women began wearing stays made from reinforced fabric, wood, or sometimes bone during the 15thcentury. The women of the French court saw stays as indispensable to the beauty of the female figure, and often wore them with a farthingale which was a structure that held their skirts out in a stiff cone. The stays flattened the chest, pushed up the breasts, and turned the torso into an inverted cone that mirrored the cone shape of the skirts. The tight lacing used later on was not possible at this time since the holes that the laces were thread through would tear under too much strain. During this period, less importance was put on the woman’s figure and more on the breasts, especially how the flatness of the front pushed the breasts over the top of the corset. 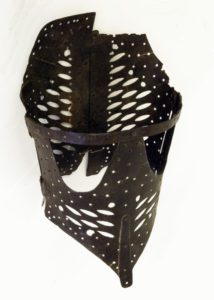 Iron corset from the late 16 century. Photo: York Museums Trust Staff Original image has been rotated here to show the corset aligned more accurately to reflect how it would have been worn, with the waist towards the bottom rather than the top. File originated on the York Museums Trust Online Collection (CC BY-SA 4.0)

From there, the whalebone corset made an appearance in 16th century France and Italy. Italian aristocrat Catherine de’ Medici (Queen of France) was the first woman to really enforce slimmer figures, banning thick waists at court by insisting on the use of whalebone bodies.

Whalebone bodies were corsets made from whalebone, horn, ivory, metal, wood, and buckram that were carved and tucked into a small pouch at the front of the corset. These were all designed to shape women’s bodies and could be worn as both underwear and outerwear. They became a separate item of clothing entirely, laced up at the front or back. The front of the corset was typically covered by a stomacher – a stiff, V-shaped piece of cloth that was worn on the abdomen as decoration.

A written account in a 1597 manuscript tells the story of Miss Starkie, a 14-year-old English girl who was allegedly possessed by a demon. Apparently, this demon caused her to make all kinds of demands, including a silk smock and a pair of corsets that were made “not of whalebone, for that is not stiff enough but of horne” because that would hold in her stomach (Steele, 2001, p. 72). She also made the demand for a wrought stomacher embroidered with gold.

In the late 1700s, corsets became less constricting as the empire waist came into fashion. Character Daphne Bridgerton’s dresses in the popular Netflix show Bridgerton offer some examples of the empire waist which de-emphasised the waistline and ended the bodice right below the bust. Short stays were corsets created to end just below the breast – possibly the earliest prototype of a bra that has become a staple for women all around the world.

After the empire style went out of fashion, corsets quickly made a comeback, reaching their peak during the reign of Queen Victoria. In the 18th and 19th centuries, the Victorian corset was primarily used to shape the breast, tighten the midriff, improve posture to help women stand up straight, and create a V-shaped upper torso. This corset design was long-waisted with a narrow back, wide front, and shoulder straps. The most fashionable corset pulled the shoulders right back, almost until the shoulder blades were touching. This created the iconic Victorian silhouette with shoulders back, erect posture, and a high, full bosom.

During the 18th and 19th centuries, short jackets called jumps were created. Derived from French jupe, they were made from quilted linen, silk, or cotton and were often embroidered. Partially boned and padded with cotton, they fastened over the breasts with silk ribbons, buttons, and sometimes metal hooks. Both jumps and corsets were undergarments and were considered quite comfortable. Well-fitted corsets did not restrict breathing and allowed women to work.

Around this time, men started to wear corsets, too. In the 18th to 19th centuries, men’s form-fitting jackets and trousers became popular and men wore corsets to help them achieve the desired smooth silhouette. But, to dispel any kind of associated femininity, English dressmakers and fashion labels of the 1800s had to utilise very strategic marketing ploys when coercing men into wearing corsets. In 1884, The Tailor and Cutterreported that “a number of our fashionable men are going in for stays and corsets”, and again, 10 years later, that “the corset is worn by thousands of men” (Cunnington and Cunnington, 284, as cited in Shannon, 2004, p. 621). Popular English dressmaker Charles Frederick Worth advertised men’s corsets for decades and announced in 1880, that his company had opened a whole department for menswear, saying they had every class of corset made to measure.

Probably the biggest push towards Englishmen wearing corsets was by Fashion magazine. In 1903, Fashionbegan to dislodge the association between femininity and corsets by promoting the corset as a men’s belt that helped with physical activity, manly stamina, and virility. Advertisements never suggested that corsets could work as shapewear for men, and articles claimed that many gentlemen, sportsmen, and soldiers wore belts for comfort and support during their various pursuits. People who contributed to Fashion magazine advised that wearing a flexible supporting belt was helpful when hunting in parts of the world that were a bit treacherous.

Even so, men spoke up about wearing corsets and the prejudice that came with it during that time, with one asserting that men did not wear them to be more feminine. Rather, he said, men wore corsets because the pressure against the stomach prevented embonpoint -fat across the chest and stomach. Another man said that, as a tennis player, he was never accused of being feminine despite wearing a tightly laced, twenty-five-inch corset. There was a writer who was displeased with what the push for male corsets meant for women, especially those who were coming to reject the usual body standards, saying, “we have heard a great deal about the new woman. Is the corseted popinjay with the twenty-six inch waist to be the new man?”

Not too far into the early 20th century, during the first World War, corsets for women were somewhat discontinued, and shapewear started to take their place. This was because the War created a shortage of certain items, so women had to adapt to whatever they could get their hands on.

Corsets went in and out of popularity in the following decades, and always depended on the course of fashion. Corsets slowly turned into costumes and were only really worn for performances by high-profile celebrities, created for them by high-profile designers.

Nowadays, corsets have become a modern trend, with celebrities like the Kardashians reintroducing waist trainers to shape the waist and singers like Billie Eilish and Rihanna wearing corsets in their music videos.

For the longest time, corsets were thought to be no better than medieval torture devices. Medical issues started popping up when paired with wearing a corset for an extended period of time as the compression often resulted in core muscle atrophy, reduced blood flow to organs, and vital organs shifting out of place. This led to poor natural posture, back pain, and general physical weakness. None of this was understood at the time and only really became known after intense research and observation by historians on ancient figures.

Since the moment corsets were first created, it was common practice to force both men and women’s bodies to conform to fashion standards rather than be accepted as they were. While those kinds of influences still exist, nowadays, corsets, when worn properly, are a fun way to spice up your wardrobe and can be a really cool and fashionable item.

Source: The Corset: A Cultural History. International Journal of Costume