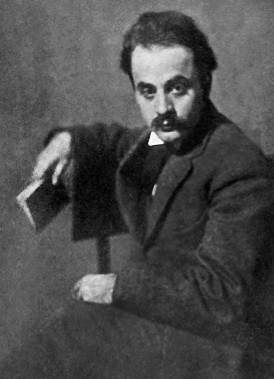 Bringing wisdom of the East to the soul of the West

If you’ve ever attended a wedding or a funeral, chances are you’ve heard the words of Khalil Gibran, whose poetic wisdom is universally embraced.

Dubbed “the Bible of the counter-culture”, the millionth copy of The Prophet sold in 1957 with more than 90 million sold worldwide to date. The Prophet has never been out of print since it was first published in English almost a hundred years ago, in 1923.

As the text of 26 poetically spiritual essays approaches its centenary next year, it is timely to ponder why an Arabic writer – translated into dozens of languages and drawing on multiple religious influences – has appealed continuously to readers across many cultures.

If you’ve ever attended a wedding or a funeral, chances are you’ve heard the words of Khalil Gibran, whose poetic wisdom is universally embraced.

Dubbed “the Bible of the counter-culture”, the millionth copy of The Prophet sold in 1957 with more than 90 million sold worldwide to date. The Prophet has never been out of print since it was first published in English almost a hundred years ago, in 1923.

As the text of 26 poetically spiritual essays approaches its centenary next year, it is timely to ponder why an Arabic writer – translated into dozens of languages and drawing on multiple religious influences – has appealed continuously to readers across many cultures.

In a similar vein, the lush and lyrical, spiritually infused verses of twelfth-century Persian poet Omar Khayyám have also achieved popularity well beyond the author’s lifetime. Translated and published by English scholar Edward FitzGerald in 1859, centuries after it was written, the Rubáiyát of Omar Khayyám captivated poetry lovers and seekers of a less traditional form of philosophical and spiritual sustenance. 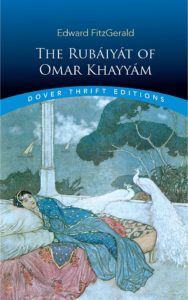 The rubáiyát, or verses, offer a sensual, “carpe diem” (seize the day) plea for humans to relish the earthly pleasures of existence, rather than be preoccupied with Heaven and Hell. Drenched in references to the intoxicating qualities of wine and roses versus the eternal dust we will all become, the Rubáiyát of Omar Khayyám offers a radical and distinctive contrast to the formal edicts of Islamic worship – the cultural and religious context it was created in.

Ah, make the most of what we yet may spend,
Before we too into the Dust descend;
Dust into Dust, and under Dust, to lie,
Sans Wine, sans Song, sans Singer, and – sans End! (XXVI)

For some commentators and experts on the writings of Gibran and Khayyám, these poets’ messages are ever more relevant in contemporary times as humanity faces an array of existential problems. Can the words of these bygone visionary writers shed light on how we might make sense of and try to overcome 21st-century challenges? Issues from climate and ecological crises to fostering more inclusive, tolerant communities, not to mention the perpetual quest for personal wellbeing – in general and during a global pandemic – amid the toxic social and political divisions it has stirred up?

In a BBC article on why The Prophet is so well-loved, Reverend Laurie Sue commented: “This book has a way of speaking to people at different stages in their lives. It has this magical quality, the more you read it, the more you come to understand the words.”

An interfaith minister in New York, Reverend Sue has conducted hundreds of weddings with readings from The Prophet. He says the book’s appeal is that “it is not filled with any kind of dogma; it is available to anyone whether they are Jewish or Christian or Muslim.”

The book is made up of 26 prose poems, delivered as sermons by a wise man called Al Mustapha who is about to set sail for his homeland after 12 years in exile on a fictional island, when the people of the island ask him to share his wisdom on the big questions of life: love, family, work, and death.

Professor Juan Cole, historian of the Middle East at the University of Michigan who has translated several of Gibran’s works from Arabic, says in the same article: “Many people turned away from the establishment of the Church to Gibran,” and states: “He offered a dogma-free universal spiritualism as opposed to orthodox religion, and his vision of the spiritual was not moralistic. In fact, he urged people to be non-judgmental.”

Who was Khalil Gibran?

Kahlil Gibran (1883-1931) was born in Bsharri, Lebanon, where his body was returned upon his death. His mother took him and his three siblings to the United States when he was 12, while Gibran’s father remained in jail, allegedly for embezzlement. They settled in Boston, joining relatives who were already there. Born a Maronite (an ethnoreligious Christian group native to the Middle East), Gibran’s unique brand of spirituality was informed not only by his own religion but also by the Baháʼí faith, Islam, and the Sufi mystics. He arrived in the United States speaking no English but thrived at school, along with extramural art lessons. Moving in avant-garde cultural circles, he was drawn to the literature of Europe and America, in particular the work of English poet William Blake.

When Gibran began to write in English, he had already been published in Arabic by the Expatriate Arab Press in New York. Pivotal to his development as a writer was Mary Haskell, a schoolteacher from South Carolina who became his patroness and confidante. As well as supporting other talented young men through educational projects, she funded Gibran to travel to Paris to study art, where he immersed himself in the Symbolist tradition. He mixed with the intellectual elite of his time, including figures such as Irish poet W. B. Yeats; Swiss psychiatrist, psychoanalyst, and writer Carl Jung; and French sculptor August Rodin, all of whom he met and painted.

As well as being his editor, Haskell helped Gibran arrange showings for his admired sketches and paintings. She also provided networking connections and important introductions. The pair were eventually engaged, but according to Haskell’s diary the relationship was not consummated.

Then in 1923, when Gibran was 40 years old, he published The Prophet. The first print run of 1200 copies sold out in a few months. It never looked back.

Professor Suheil Bushrui, in his essay published on The Khalil Gibran Collective website, says Gibran achieved enduring respect and fame as a writer in two completely disparate cultures and represents “one of the most widely read authors in his adopted tongue – his work possessing a rare and distinctive flavour of ancient wisdom and mysticism, often leaving readers amazed to discover that its creator lived in New York from 1912 to 1931”.

Reflecting on the enduring popularity of The Prophet in those years, and following the Great Depression, Professor Cole noted that urban America seemed to be moving away from conventional religion and towards a more non-fundamentalist form of spirituality.

Harking back several centuries, 11th-century Iranian astronomer, mathematician, and poet Omar Khayyám also explored themes of life’s meaning against the backdrop of mortality. Although not a literal translation of the original Persian poems, critics generally agree that Edward FitzGerald’s loose interpretation astutely captured the spirit of the Rubáiyát.

Joobin Bekhrad – writer, editor, poet, and translator – writes: “His poetry was unlike that of any other Persian poet before him, and he has occupied, for centuries, a place wholly unique in the grand corpus of classical Persian literature.” Bekhrad adds that his perspective on the “transience of life and the inevitability of death, and the importance of seizing the all-too-brief moment we are allotted on Earth” would likely to have been influenced by the Turkic occupation of Iran (recently invaded by Arabs and Mongol hordes). “Any talk of the afterlife or religion he deemed hot air.”

Khayyám, in the Rubáiyát, writes:

No one has seen Heaven or Hell, O heart of mine;
Who, say you, has come from that realm, O heart of mine?
Our hopes and fears are pinned to that to which,
Save a name and notion, we can naught else assign.

Khayyám’s poetry has undoubtedly stood the test of time. FitzGerald’s translation is not the only one but is the most well-known English version, an English classic in its own right. How could the words of an 11th-century polymath have any relevance not only in the Victorian era and the mid-20th Century, but also today, Bekhrad asks? “The answer lies in the timelessness of the Rubáiyát, and its universal truths that know not culture, religion, or creed. Indeed, in today’s uncertain times, the Rubáiyát may be even more relevant than during the tumultuous times in which it was originally written,” he proposes.

The same status has been applied to The Prophet. “I think there are a lot of opportunities now for expressing the thoughts that are in The Prophet in new ways. And so I wouldn’t be at all surprised, if there’s another wave of popularity for him,” says Professor Cole.

“One thing that might be said,” he adds, “is that in our age of Islamophobia and a kind of negative association of things Middle Eastern, recovering Gibran as a Middle Easterner could be an important cultural enterprise.”

Penguin Classics released a new edition of The Prophet in 2019 with a foreword by Instagram’s poet laureate, Rupi Kaur, The New York Times bestselling author of milk and honey, the sun and her flowers, and home body. She describes The Prophet as “my all-time favourite collection of poetry … Gibran’s poetry always roots me in my humanity.”

Spiritual texts and truths come in many forms and are integral to most cultures. In more modern secular cultures such as Aotearoa, the idea of quintessential truths spanning different cultures seems appealing as society grapples with the enrichments as well as challenges of an increasingly diverse population.

Diversity can also spawn tensions, intolerance and misunderstandings that give rise to dangerous responses such as Islamophobia. Exploring the enduring appeal of Gibran and Khayyám’s words might lead us beyond these gnarly pressures to a deeper level of understanding about what unites us, an acknowledgement that spiritual truths can bind and blend the best of East and West. 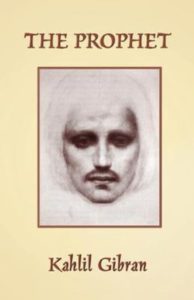 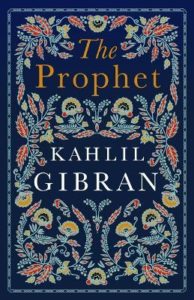 Seven popular quotes from The Prophet

“Your children are not your children. They are the sons and daughters of Life’s longing for itself.”

“And forget not that the earth delights to feel your bare feet and the winds long to play with your hair.”

“Some of you say, ‘Joy is greater than sorrow,’ and others say, ‘Nay, sorrow is the greater.’ But I say unto you, they are inseparable. Together they come, and when one sits alone with you at your board, remember that the other is asleep upon your bed.”

“Love one another but make not a bond of love: Let it rather be a moving sea between the shores of your souls.”

“Love knows not its own depth until the hour of separation.”

“I love you when you bow in your mosque, kneel in your temple, pray in your church. For you and I are sons of one religion, and it is the spirit.”

“In the sweetness of friendship let there be laughter and sharing of pleasures. For in the dew of little things, does the heart find its morning and is refreshed.”

Source: The Rubaiyat: History’s most luxurious book of poetry? bbc.com