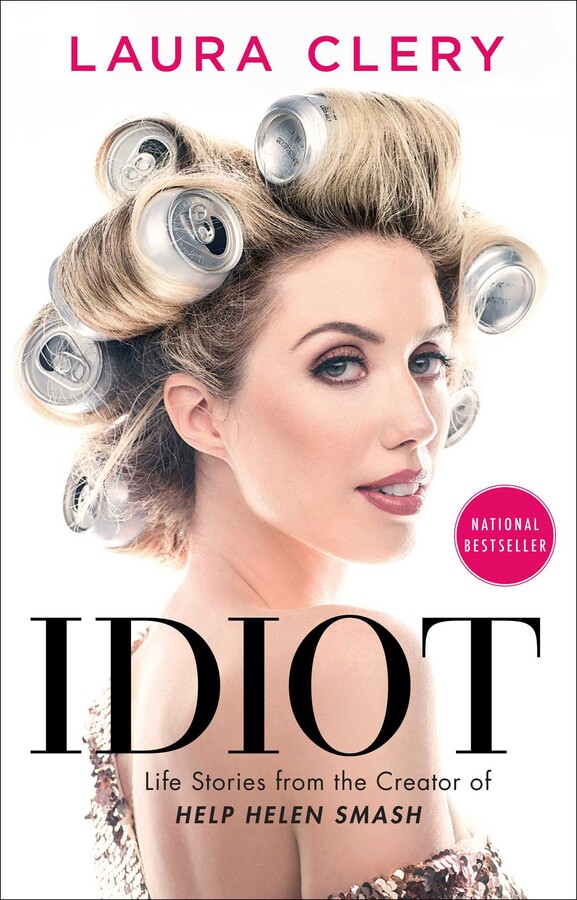 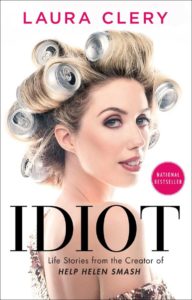 Idiot: Life Stories from the Creator of Help Helen Smash

Idiot: Life Stories from the Creator of Help Helen Smash

Comedienne, multi-persona character and influencer Laura Clery’s Internet videos hooked me in a flash. I latched on to them by chance and was entranced by Clery’s lack of pretence – strange because as a TV actor and LA YouTube star, you’d expect her performances to be a bit of a show. They’re not – and I think that’s what got me. Clery and co-host husband Stephen Hilton’s honesty is out there, and nothing is sacred. Utterly open with everything that’s Life, they’re authentic, bawdy, emotional (but not in a cringy-twee kind of way), and funny.

When I picked up Idiot: Life Stories from the Creator of Help Helen Smash, a few pages in and again, I’m smitten by Laura Clery. Reading Clery’s accounts of her childhood; her hippie-liberal parents complete with high achiever, super-loving mum, and creative alcoholic dad, I get where she’s coming from. From ditching elementary school, smoking pot loads of weed (which her dad asks her to buy for him, too), to pilfering, and peeing in public, Clery’s early years are unguided, unregulated and helluva fun.

Her later heavy drug use was not such a good time, however, and Clery spiralled downwards for a while, before turning from being a “selfish, suicidal, self-obsessed, drug-addicted alcoholic to being a more happy-then-not vegan, sober yogi with three rescue pets, making an effort to give back every day.”

Clery’s content creator job is loaded with pressure. By moving away from alcohol and drug abuse and towards sobriety, she hammered the associated self-sabotage and committed to instead “stay in the action and out of the results”. Discovering The Law of Attraction helped her change her mindset and powerful, positive affirmations became part of life. She retrained her brain and attracted fifteen million followers.

“The point of this book is to articulate that people have the capacity to change.” – Laura Clery.

Idiot: Life Stories from the Creator of Help Helen Smash is an inspiring and hopeful read. If there’s ever an anecdotal yet resoundingly obvious case for personal transformation, it has to be Laura Clery’s. The kind of ‘ewwww’ that Clery’s Help Helen Smash brand epitomises also showcases her success: audacious, unafraid, and authentic. It’s bold and hilarious – like Clery herself.

“Laura Clery, honest and so funny. This is an open and honest account of one woman’s battle to beat her demons and fight to find and do what truly makes her happy. A fantastic read and inspirational as well as funny despite the sadness.” – Tracy Ash, Waterstones, 2020. 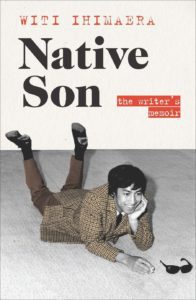 Two mentions in two book reviews of literary icon, Witi Ihimaera, DCNZM QSM might seem excessive, but few could deny that Ihimaera is indeed one of New Zealand’s greatest ‘native sons’. This second volume to his 2014 Ockham NZ Book Award-winning Māori Boy: A Memoir of Childhood continues his journey begun as a youngster in rural Gisborne, New Zealand. Both tell of the experiences gleaned from his ancestral whakapapa helped shape his boyhood, and with maturity, the stories he is so renowned for today.

During an interview aired on Radio New Zealand National, Witi Ihimaera states of his memoirs, “It’s not just about me. It’s about this valley, it’s about a Māori story that draws its inspiration from oral traditions. It’s about what we were like in the 1940s and 1950s.”

Following on from Māori Boy is Native Son; the writer’s memoir and it is a joy to read. It begins with Ihimaera’s graduation from Te Karaka District High School with the bare minimum 200 marks needed to pass School Certificate (NCEA level 1). His parents discourage a career in farming and one in classical music was mooted instead, before off to the Mormon Church College he goes.

The University of Auckland welcomes Ihimaera in 1963 and in between studying, changing universities, and other pursuits (including one as a postman) Ihimaera manages to finish his BA and is headed for a prolific and exemplary life as a writer.

The year is 1972, his first collection of short stories (Pounamu Pounamu) is about to be published and his novels Tangi (1973) and Whanau (1974) follow in quick succession. Ihimaera is on top of the world. Native Son follows Witi through his triumphs and failures, from sexual exploration, self-harm, and depression, to lifting the veil on a life unsaid while searching for love and purpose.

“Brave, shocking at times, and yet lyrical and heart-warming. I loved the spiral structure and the Māori mythology that is such an intricate part of this book. Looking forward to the final instalment in this autobiographical trilogy.” – Eileen Merriman, Goodreads, 2019

Ihimaera has been recognised as “one of the world’s leading indigenous writers” (Stuff, 2017). He was the first Māori writer to publish both a novel and a book of short stories. His 1987 novel The Whale Rider is arguably his best-known work, read widely by children and adults both in New Zealand and overseas. It was adapted into the critically acclaimed 2002 film Whale Rider directed by Niki Caro. 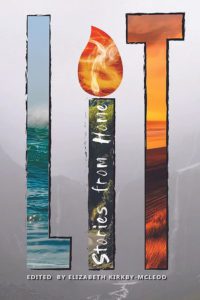 I understood the modern usage of the word ‘lit’ to mean excellent, exciting, or super-cool. In a sense, Lit: Stories from Home personifies that interpretation as much as it does the spin on Elizabeth Kirkby-McLeod’s early inspiration editor Dan Davin’s 1953 description of the short story as a “sidelight on the history of New Zealand which historical documents more narrowly could hardly give”.

Well, New Zealand is blessed with literary talent and the contributors of this anthology glow with an inner light unique to this country. The compilation is not definitive; the stories are wide-ranging in topic and spread over fifty years of creative output. Present-day Taranaki icon David Hill’s ‘Free as a Bird’ 2006 features as does Frank Sargeson’s ‘A Good Boy’ 2010, and Katherine Mansfield’s ‘The Doll’s House’ 1922 (I recently viewed a very sweet replica of this namesake at Mansfield’s childhood home on Tinakori Road in Wellington).

Some are writers who have immigrated from other countries: Ting J Yiu was born in Hong Kong and came to New Zealand with her family age eleven; Rajorshi Chakraborti was born in Kolkata, India. Some are very young: Russell Boey’s ‘Nineteen Seconds’ won the 2020 Sunday Star-Times short story competition in the Under 25 Category.

Some are New Zealand Māori, like DCNZM QSO Patricia Grace of Ngāti Toa, Ngāti Raukawa and Te Āti Awa descent. Grace is one of our country’s most established writers; her ‘Letters from Whetu’ was first published in 1980 and sits well alongside the much loved Witi Ihimaera’s ‘Tent on the Home Ground’ 1977.

These authors are no fly-by-night successes. All have rightfully staked their place in New Zealand fiction and stayed there to be celebrated again and again, as exemplified by Lit: Stories from Home.

Lit allows us “to glimpse Aotearoa … through the eyes of someone whose experience might not mirror our own.” – editor Elizabeth Kirkby-McLeod.

Stories about family, political awareness, identity, culture and coming of age, all homegrown. A great educational resource and, simply, a jolly good read. 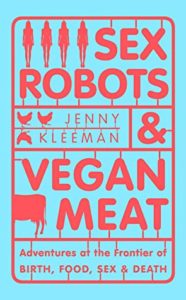 Rating: 4 out of 5 on Goodreads

What is it about today’s culture that inspires us to want to change our society so radically that humankind will never be the same again? Natural evolution must have a part to play, and it seems man has become incredulous at the power and potential of his intellect. The urge to explore how technology can enhance and facilitate revolutionary advancements in lifestyle is tremendous, compelling, and irresistible. We seek perfection (and why not?), an easy existence – and now the choice to end that existence of our own accord.

Sex Robots & Vegan Meat: Adventures at the Frontier of Birth, Food, Sex & Death by Jenny Kleeman discusses our desire for the perfect partner, the perfect gestation, the perfect meat, the perfect death. Kleeman takes us to labs where foetuses grow in bags outside of a womb; to members-only meetings where people learn how to end their own lives; to where meat is made without an animal’s sacrifice.

She learns about the rewards and freedom to be had from marriage to a designer-sex robot, how vegans will be able to eat ‘clean’ plant-based artificial meat that looks real (would they want to?), and talks to Exit International Dr Death himself, Philip Nitschke, about his new 3D printed euthanasia machine.

It’s not science fiction. All these concepts are meticulously researched at the coal face of their conception and in a matter of fact manner that informs, intrigues but, if I’m honest, also alarms.

‘Solutions’ to mankind’s need for continual improvement in our cornerstones of survival are inevitably evolving each day. The questions that will persist are about their positive impact and associated moral and ethical dilemmas. Stay tuned.

“Incredibly well-written thought-provoking book. The selection of sex, food, birth and death allows a perfect flow. The characters were very engaging and the I loved the core message of the book which you should find out for yourself. I immediately started reading her articles on Guardian after the book and those are also highly recommended.” – Sencer Berrak, Goodreads, 2020.

Award-winning journalist Jenny Kleeman writes for the Guardian, The Times, and the Sunday Times. She’s also a well-respected TV reporter and maker of 13 films.