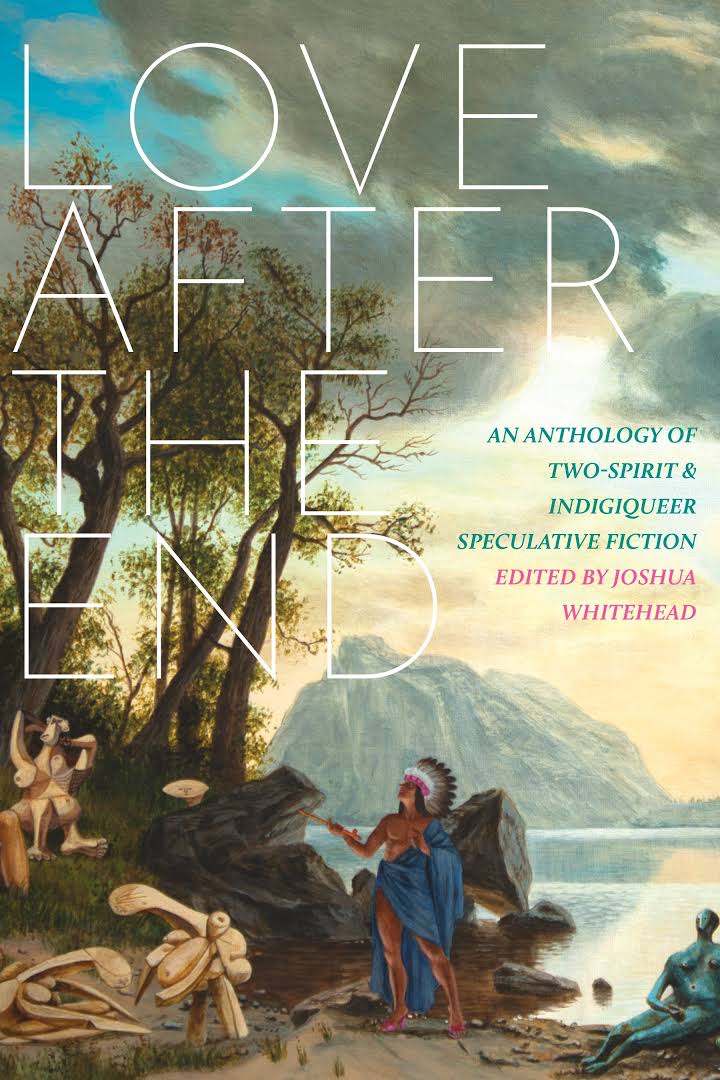 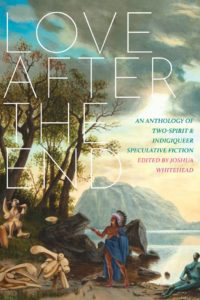 Love After The End: An Anthology of Two-Spirit and Indigiqueer Speculative Fiction

Love After The End: An Anthology of Two-Spirit and Indigiqueer Speculative Fiction

I resorted to an online dictionary to clarify the word ‘Indigiqueer’. What came up instead was a stream of accolades for the editor of Love After The End: An Anthology of Two-Spirit and Indigiqueer Speculative Fiction, Joshua Whitehead. Amongst the many was also a Wikipedia entry which brought home the fact that Whitehead is a person of some cultural renown. In a good way. Whitehead is a Canadian First Nations (First Peoples) Two-Spirit poet and novelist.

The term Two-Spirit was created at an indigenous gay and lesbian international gathering in 1990 at Whitehead’s hometown of Winnipeg, Canada. It’s used to describe Native First Peoples who fulfil a third gender role – as neither a man nor a woman – in their culture. Supplanting the culturally insensitive term berdache in use until the 20th century, Two-Spirit is gradually becoming more recognised as a pan-Indian (Native American, First Nations, Inuit, and Métis – FNIM) unifier by both indigenous and Westernised cultures. Love After The End: An Anthology of Two-Spirit and Indigiqueer Speculative Fiction is going a long way to assist that recognition.

Primarily aimed towards a young adult readership, the anthology is a sequel to the 2016 American Indian Youth Literature Award-winning Love Beyond Body Space and Time edited by Hope Nicholson. Love After The End is a similarly glorious mixture of post-apocalyptic fantasy, sci-fi, dystopian, and utopian scenarios written by nine Two-Spirit indigenous writers from across Turtle Island. Stories of love and intimacy, family and kinship, the Earth, and the possibility of happier futures.

Joshua Whitehead is an Oji-Cree, Two-Spirit storyteller and academic from Peguis First Nation on Treaty 1 territory in Manitoba. He is currently working toward a Ph.D. in Indigenous Literatures and Cultures at the University of Calgary on Treaty 7 territory. His most recent book of poetry, Full-Metal Indigiqueer, was shortlisted for the 2017 Lambda Literary Award for Transgender Poetry.

“Really interesting collection of short sci-fi stories. I don’t think I’ve read a book with so many queer, non-binary, trans POC – the stories were captivating and focused on love, connection, story-telling all written by indigenous writers and edited by Joshua Whitehead. Very very good.” – Kasia, Goodreads 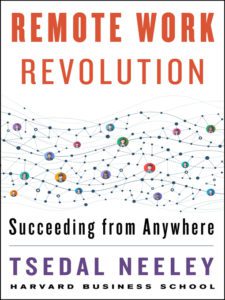 HarperBusiness (an imprint of HarperCollins) 2021

As a contractor working from home well before ‘remote’ even became a thing, I’ve sympathised with those who have been tossed, with minimal time to adapt, back onto home turf and expected to thrive professionally. When history was made virtually overnight in 2020, digital platforms like Google Chat, Microsoft Teams and Zoom suddenly became a vital and intrinsic part of daily working life. Most users had to get a grip real quick, and 18 months on, the fact remains, that remote is where it’s at for thousands of enterprises worldwide.

While many employees and their managers are exhausted at the neo-working habits mandated since the advent of Covid-19, just as many have enjoyed remote’s self-autonomous structure and its relative flexibility. However, the rapidity with which it burst upon the majority took those by surprise and required a certain professional agility and psychological pragmatism to make it work.

Remote Work Revolution; Succeeding from Anywhere by Tsedal Neeley is the latest book attempting to assist those transitions. It reads well, is simple enough to understand, and, possibly most inspiring, it offers sensible and sensitive tools for businesses to ensure the successful longevity of working remote.

Neeley’s well-researched chapters are intelligent, informative, and useful; topics such as building trust between teams and managers, enhancing productivity, maintaining motivation, using digital tools effectively, leading virtually, understanding work-life balance, and preparing for future global crises. It provides evidence-based answers to how to help reduce the out-of-sync-isolation gap some team members feel, and how both managers and staff can utilise best work practices to help each other grow.

Tsedal Neeley is an award-winning professor in the Organization Behaviour unit at the Harvard Business School. Prior to her academic career, Professor Neeley spent ten years working in various areas including strategy for global customer experience, helping to shape her work which focuses on the effects of globalization on organizations and their employees.

“I often talk about the importance of trust when it comes to work: earning the trust of your employees and building trust with your customers. This book provides a blueprint for how to build and maintain that trust and connection in a digital environment.” – Eric S. Yuan, founder, and CEO of Zoom 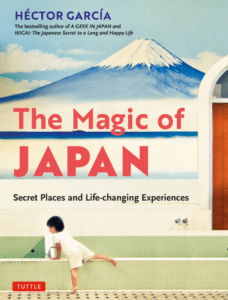 The Magic of Japan; Secret Places and Life-changing Experiences

In my part of the world, the giant cherry tree at our front gate is in full bloom. Every day, I stand beneath it, look up and bask in its fluffy perfect pinkness. And until the equinox winds blow the blossoms to smithereens come December, I know it’s the closest I’ll get to Japan right now.

While Japan’s fame for cherry blossom is only one tiny facet to its many-layered culture, the topic of Sakura cherry trees is included as a stand-alone chapter in The Magic of Japan; Secret Places and Life-changing Experiences by Héctor García.

Spanish-born García spent 15 years in Japan and talks about the Sakura cherry blossom and the associated festival with affection and reverence. He explains Japanese terms specific to the celebration; Hanami is when all else is abandoned in favour of “looking at the flowers” while sitting and enjoying life under a dense and utterly beautiful umbrella of blossom. Another which took my heart: hanafubuki referring to the fall of the blossom – an event of extreme beauty similar to the falling of snowflakes.

Sakura is but one cultural more depicted by García in his practical, humorous, poetic writing. He reveals the cultural nuances and traditions of Japan in as fine a detail as someone who is constantly questioning them can do. When chapter two states that “not even the Japanese agree on how to explain Japan”, you appreciate what a challenging task he has set himself, particularly when there are bookstores around the world showcasing a literary genre called nihonron dedicated to the quest of analysing why Japan is as it is today.

I think García manages incredibly well. Throughout this gorgeous book are accessible insights on Japanese communication, behaviours, idiosyncrasies, religions, festivals, crime; Japan’s feudal past and popular culture, and how all are hinged tightly by Japan’s spiritual underpinnings. The Magic of Japan; Secret Places and Life-changing Experiences is an enlightening and fascinating dialogue about a culture that is akin to another dimension.

“Welcome to the endless mystery and magic of Japan!” – Héctor García, 2021

“Hector Garcia has written two books on Japan: A Geek in Japan and the Magic of Japan filled with pictures which add a lot to the enjoyment of reading them. I was blown away by both books. I probably will never get to Japan, but I can dream.” – Walter F. Moll, U.S. verified purchaser 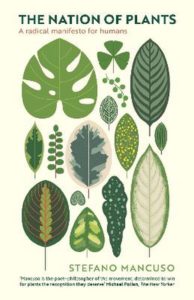 The Nation of Plants; A radical manifesto for humans

A manifesto is a published declaration of the intentions, motives, or views of the issuer, be it an individual, group, political party, or government. If that’s the correct definition, then The Nation of Plants; A radical manifesto for humans by Stefano Mancuso is a dead ringer for it. However, in this book, the case is one presented by plants.

Mancuso is a leading neurobiologist, expert on plant intelligence, and author of several books about trees and plants. Here, he has taken a subject that could be regarded as serious – if not a little turgid and weighty – and transmuted it into a book as philosophically oriented as it is entertaining.

Described as a “playful” manifesto, The Nation of Plants looks at humans from a plant’s-eye view and discusses the contradictory relationship between the two entities. Mancuso’s sympathies clearly lie with the plants. As winners of the early inhabitants of Earth prize (say three billion years as opposed to humans’ paltry 300,000), his discourse on that justifiably superior position is both poignant and humorous.

Humankind has done an outstanding job of making future-life on Earth increasingly dubious, and in the process the plants have watched, wailed, and wrung their leaves in despair. It’s time for plants to speak out and be heard – and they have a lot to say. Here, they are offering a new constitution based on the fundamental pillars of plant life which must henceforth regulate all living beings.

As suggested by the plants to Mancuso, the newly defined Bill of Rights of the Nation of Plants doesn’t mince words. For example, Article 3: ‘The nation of plants recognise and protect the inviolable rights of natural communities as societies based on animal hierarchies, founded on command centres, and centralised functions, and shall foster diffuse and centralised vegetable democracies.’

Wordy, wise, and certainly well worth listening to before it’s too late. Compared to our constitutions, plants offer us a revolution.

Stefano Mancuso is a leading authority in plant neurobiology, which explores signalling and communication at all levels of biological organisation. He teaches at the University of Florence and has been ranked ‘world changer’ by The New Yorker.

“The Nation of Plants unveils the long-term relationship between plants and people and explores the rights of all living things. It is a call for cooperation in a world facing persistent environmental degradation. It is a call for our mutual survival.” – Lauren E. Oakes, author of In Search of the Canary Tree