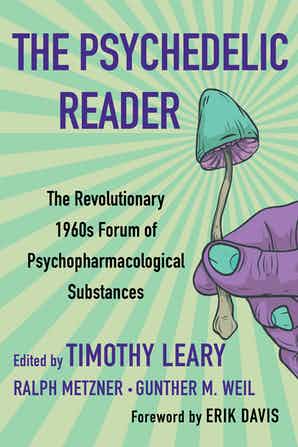 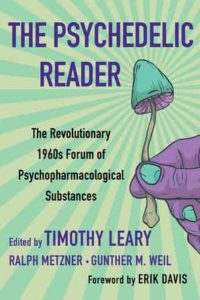 As is my wont, I recently went back in time and into the archives of the first journal of the Psychedelic Review (1963) to discover some excerpts from its statement of purpose:

“The effects of psychedelic substances pose fascinating problems for medical and psychological research and have far-reaching implications for many issues in the sciences and the humanities. The Psychedelic Review is designed to serve as a forum for the exchange of information and ideas about these issues. The term ‘psychedelic’, first proposed by Humphrey Osmond, is derived from the Greek and means ‘mind-manifesting’.” – Psychedelic Review, Vil. 1, No. 1, June 1963.

So picking up The Psychedelic Reader: classic selections from the Psychedelic Review by Tim Leary and co., I predicted a liturgy on ’60s-style radical culture. The associated mind-bending experiences – potentially valid in treating mental, physical and emotional disturbances – were also part of my pre-meditated expectations. I wasn’t disappointed. The Psychedelic Reader takes excerpts from the Review series and examines the botanical and chemical components of cactus, marijuana, fungi, and seeds. Experimental case studies and expert dissertations are presented on topics as diverse as anthropology, religion, pharmacology, poetry, metaphysics, dreamwork, spirituality, mystical states, and regression.

With words from Alan W. Watts, Timothy Leary, Sir Julian Huxley, Ralph Metzner and more, this powerful anthology discusses the entire psychedelic spectrum with all the seriousness and open-mindedness it deserves. Once an alternative doorway into radical culture, LSD and other psychoactive drugs are now being re-examined for possible mental health benefits in treating depression, anxiety disorders, and PTSD. The Psychedelic Reader offers a relevant guidebook to the foundations of a bold new era in mental health studies.

“… I am left with the impression that this one of the best sources of both scientific and/or spiritual writings by some of the greatest minds to survey the outer limits of the human psyche in one volume.” – Bryan T. Raymer, Amazon.

Timothy Leary was one of the most famous countercultural icons of the 1960s. In 1957, the Harvard psychologist experienced a “profound transcendent experience” while taking hallucinogens in Mexico. Leary began advocating the psychotherapeutic and spiritual benefits of LSD.

Ralph Metzner, PhD, was a psychologist who explored states of consciousness and transformational practices throughout his career. As a graduate student at Harvard, he worked with Timothy Leary and Richard Alpert (later Ram Dass) on the Harvard Psilocybin Projects.

Gunther M. Weil, PhD, is an educator, psychologist and consultant who has provided personal growth training for executives and organisations worldwide. His early professional mentors included Carl Rogers, the creator of Client-Centred Psychotherapy, and Abraham Maslow, the father of Humanistic Psychology. 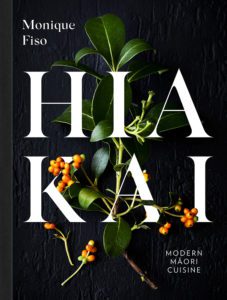 I interviewed Singaporean-born chef Faizal Kamsan in this issue of BiograView, and he told me about a few of his cooking heroes. Citing international cooking greats such as Thomas Keller, Faizal paid equally deep tribute to New Zealand chef Monique Fiso.

Faizal describes Monique’s cooking as taking traditional flavours and ingredients and using technical excellence to present a modern dish that interests and excites. Faizal may well be attuned to Monique’s current position in the hospitality world: both left their respective schools in their early teens, then travelled globally, working hard, and following their passion to create new concepts in cooking.

Described as a modern-day food warrier, in 2016, Michelin-trained Fiso returned to New Zealand and embarked on her new endeavour: Wellington restaurant Hiakai. Since opening, Hiakai has been commended by the Wall Street Journal, New York Times, Los Angeles Times, National Geographic, Forbes and TIME magazine, which named the restaurant in 2019 as one of the ‘100 Greatest Places’ in the world.

Hiakai is Māori for hungry; having a desire, need, craving for food – a perfectly apt nomenclature for a creative cooking space that explores and pushes beyond the status quo of Māori food in New Zealand. Hiakai’s website mentions “a special focus on researching and showcasing Māori and Polynesian ingredients in modern and innovative ways. Fiso has taken Māori cuisine to a whole new level of sophistication and pushed it into the next chapter in its food story”.

Fiso’s book, Hiakai: Modern Māori Cuisine, is now available for all to share that philosophy, whilst also encouraging respect and awareness of foraging and Māori food culture in Aotearoa New Zealand. It tells the story of Monique’s journey of self-discovery on her path to exploring and presenting the uniqueness of Kai Māori to the world.

“The book is part history, covering different traditional ways Māori had of catching, growing, foraging and cooking their kai. Fiso talks about the tikanga (customs) involved in many aspects of gathering and preparing the ingredients and it was just amazing to read about. …This is an incredible book, and I felt many things reading it – awe at the ingenuity of Māori, nostalgia for my childhood … Most of all, it made me so appreciative of the country I come from and the way it has sustained myself, my family and our ancestors for generations.” – Toni Duder, Goodreads. 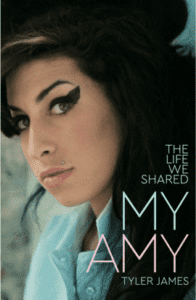 My Amy. The life we shared

I first heard the jazzy, contralto voice of Amy Jade Winehouse the year she died. How had my awareness of this incredible songstress been so brief? A limited inaugural experience – extended, of course, via the longevity of recordings – I was grateful I had at least experienced that. Like a million others, I was devastated at Winehouse’s short-lived existence on earth. Her pain and battle with addiction wrought by the insidious side effects of sudden attention and personal tragedy touched my maternal heart.

Someone so rightly revered for their talent often knows few genuine friendships. Amy was lucky that she was deeply loved by her childhood friend and soulmate, singer-songwriter Tyler James. James met Amy Winehouse at age 13 when they both trained at the Sylvia Young Theatre School. Partnered to record Happy Birthday for a teacher’s mum, Tyler was amazed by Amy’s voice, and she by his. Sharing a fun-loving teenagehood then navigating towards a new, darker world of fame, the two supported each other through thick and thin. Tyler and Amy lived, worked, and toured together, and both understood the music industry’s weakness for substance abuse.

Their connection never wavered, and he was at her side from that point on until her death at 27.

James tells us about the creation of the multiple Grammy-winning Back To Black (which Winehouse wrote on their kitchen floor), her destructive marriage to Blake Fielder-Civil, and her progressive loss of control, then of reality.

James wrote My Amy as a commemoration of the tenth anniversary of Amy Winehouse’s death. It’s a heartfelt, evocative account of an unbreakable friendship that spanned over a decade. Written with a searing honesty that underscores issues such as addiction and self-sabotage, My Amy reveals the hard-out challenges Winehouse faced during her rapid trajectory to success. Her early death shocked and dismayed the world. This definitive insider’s story tells us all, finally, the truth.

“Raw is a word that can get overused when describing memoirs or autobiographies. Not in this case. This book is drenched in grief and love in equal measure. The author’s voice was strong throughout and it was an intense read at times. One of the best books I’ve read in a long time and gives you a different understanding of Amy throughout key moments of her life.” – Abby, Goodreads. 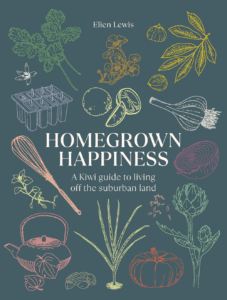 Homegrown Happiness: A Kiwi guide to living off the suburban land

Too new for ratings.

She’s also an avid gardener and her meanderings find Lewis in small spaces chock-a-block with veggies, fruits, flowers, and herbs, which she happily puts to good use in the kitchen. Hers is not a large garden, and it’s shady to boot, so there’s a good bit of garden management to be had. But she grows according to the conditions, and as a self-described ‘rustic-style cook’, makes do with what has helpfully popped up through the soil.

Growing plants then transforming them into tasty, wholesome dishes is a joy best experienced for yourself. However, if inspiration and know-how are not running to your advantage, then Lewis proffers accessible ideas and practical applications via her book, Homegrown Happiness: A Kiwi guide to living off the suburban land.

Homegrown Happiness leads both the novice or practised gardener through a year of learning and doing. It enables you to develop an edible organic garden that suits your culinary needs, harmonising with the existing topography of your land. You will be surprised at just what’s possible – even in the most challenging terrain!

Lewis is a strong advocate of the low-maintenance, no-dig gardening method, saving you time (and sweat!) so you can enjoy the fruits of your labour more easily. She gives sensible advice on how to prepare and maintain your vegetable patch, what to plant and when, seed saving, companion planting, planting deciduous fruit and nut trees, how to establish a working compost bin, keeping pests at bay, and the best time to forage and harvest.

Because the productive space in her garden is small, Lewis follows a ‘root to tip’ philosophy which encourages the practical use of every edible bit of your harvest. This successfully stretches out the versatility of your produce, minimising waste while capitalising on the energy you’ve expended growing each crop. Homegrown Happiness also includes healthy homegrown recipes the whole family will love, including Sticky Ginger Cauliflower, Dandelion Quesadillas, Probiotic Honey Lemonade and many more.

Homegrown Happiness is sustainable, low-maintenance, low-cost living at its best – providing easy-to-follow guidelines for creating a robust and healthy garden ecosystem, whatever your living situation or lifestyle. It’s time to embrace your garden space with Homegrown Happiness.