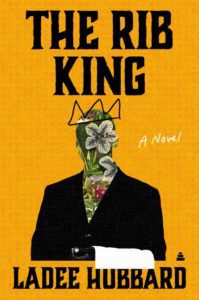 Rating: 4 out of 5 stars on Amazon

Who is The Rib King? I picked up this book from our local library, curious about the cover illustration: a black-suited silhouette carrying a butler’s white towel across his arm and bearing a hand-scribbled crown on his flower and berry-filled head.

The Rib King by Ladee Hubbard is a novel set in early 20th century New Orleans America. August Sitwell is a Black American servant, plucked as a child from the ravages of a racist massacre in the South, and employed with five others by the wealthy Barclay family. Miss Mamie, the cook, is renowned for her sumptuous meat sauce. When the family falls into financial strife, an enterprising business associate suggests selling Miss Mamie's sauce to recoup the family's lost fortune.

Rating: 4 out of 5 stars on Amazon

Who is The Rib King? I picked up this book from our local library, curious about the cover illustration: a black-suited silhouette carrying a butler’s white towel across his arm and bearing a hand-scribbled crown on his flower and berry-filled head.

The Rib King by Ladee Hubbard is a novel set in early 20th century New Orleans America. August Sitwell is a Black American servant, plucked as a child from the ravages of a racist massacre in the South, and employed with five others by the wealthy Barclay family. Miss Mamie, the cook, is renowned for her sumptuous meat sauce. When the family falls into financial strife, an enterprising business associate suggests selling Miss Mamie’s sauce to recoup the family’s lost fortune.

They name this sauce The Rib King and Mr Sitwell is bribed by greedy capitalists into personalising its brand. The sauce is a culinary triumph yet though August and Mamie are instrumental in its success, neither see a dime of the proceeds. August is furious, and his resentment justifiably builds into hatred – not only at this exploitation but also that suffered by so many other African Americans at the hand of Southern Whites.

The corruption of his abusers twists him into a person unrecognisable from the first half of the book and leads him towards revenge and a shocking tragedy, while Jennie Williams, another domestic worker for the Barclays, eventually discards her abusive life and remakes herself into an inventor and entrepreneur, outmanoeuvring gangsters, activists and White businessmen alike.

The Rib King is an unsparing examination of America’s fascination with black symbolism and exploitation that redefines African American stereotypes in literature.

“Wow! What an interesting read. I always find novels about the 1920s very Interesting and enjoyable in this book did not disappoint. The author of this book covered a lot of American history, and the social commentary was on point. I’m looking forward to another book by this author.” – Brittany Jenkins, Verified Purchase

Ladee Hubbard is the author of The Talented Ribkins, which received the 2018 Ernest J. Gaines Award for Literary Excellence and the Hurston/Wright Legacy Award for Debut Fiction. Her writing has appeared in Guernica, the Times Literary Supplement, Copper Nickel, and Callaloo. She received a 2016 Rona Jaffe Foundation Writers’ Award as well as fellowships from the MacDowell Colony, Art Omi, the Sacatar Foundation, the Sustainable Arts Foundation, Hedgebrook, and the Virginia Center for the Creative Arts.

Rating: 5 out of 5 on Goodreads

I had the good fortune to marry a man who loves trees. His path in life is strewn with them: working, living, planting, and nurturing. In Taranaki, our climate and terrain are so suited to trees that we are the envy of countries worldwide. That makes me glad because, over the past 80-odd years, global opinions and activities centred around caring for the environment have slowly built, then erupted in favour of trees.

I remember seeing a beautiful play enacted by a local theatre company based on the 1953 short story by French author Jean Giono: The Man who Planted Trees. It moved me deeply because symbolically, that man is my husband. And metaphorically, he is also the author of Tree Sense; Ways of thinking about trees: Dr Susette Goldsmith.

Writers like Giono and Goldsmith give hope to a world crying out for more trees.

Tree Sense; Ways of thinking about trees by Dr Susette Goldsmith provides a gamut of persuasive, informative, and well-crafted stories, written by a group of respected writers, ecologists and activists. From the lyrical opening prose by Elizabeth Smither, to Goldsmith encouraging the development of ‘tree sense’ in New Zealand citizens (citing the Bush Preservation and Amenity Tree Planting parliamentary conference in 1937) Tree Sense is immaculately researched and historically accurate.

Climate change has informed and transformed our approach to life and, the protagonist of this era is undoubtedly arboreal. Tree Sense; Ways of thinking about trees reminds us to mindfully defer to our tree resources as environmental lodestars of the future.

Around the World in Eighty Wines; Exploring Wine One Country at a Time

If you’ve heard of a chap called Phileas Fogg, then hats off to your literary knowledge! He was, of course, the hero and main character in Jules Verne’s famous adventure novel, Around the World in Eighty Days, published in 1872. The plot involves Fogg’s substantial wager with a fellow ‘reformer’ (a political movement in opposition to the Conservative party) that he can circumnavigate the world, by steamer and rail, in 80 days or less.

Around the World in Eighty Wines; Exploring Wine One Country at a Time by Mike Veseth takes his cue from this classic – as have numerous other emulators over the last century. However, Veseth goes deep into replicating Phileas Fogg’s audacious and risky gambit, following in his footsteps from London to Egypt, India, Hong Kong, Japan, the USA, and back to the UK.

Along the way, love, natural obstacles, and transport issues cause delays to Fogg’s tight timeframe, and, if not for his resilience and endurance, all would be lost. Fogg’s staying power across odds mightier than distance, and his human traits of strength, loyalty and love see him through; it’s these qualities that provided the inspiration for Around the World in Eighty Wines.

Veseth sets a challenge pleasanter (and far less perilous) than Fogg’s. He aims to journey around the world collecting 80 bottles of wine in order to answer the question: Why wine? What is it about mythical and historical wine that has enraptured us enough to wax lyrical about its nose, colour, terroir, provenance, and price? Every glass tells a story, paints a picture, or continues a legend, and from one wine country to the next, Veseth lets us in on them all.

From Winston Churchill’s favourite Champagne tipple, France’s Pol Roger, to Italy’s Prosecco affaire, the Portos of Portugal, the Sauvs of India, and beyond. Around the World in Eighty Wines is a rollicking journey of fascinating historical and contemporary wine wisdom.

“Like a master blender, Mike Veseth stimulates the mind’s appetite with a wonderful balance of illusion and substance, as complex as a fine wine. Structured with cultural nuance and imagination, this delightful book is a must-read for serious wine enthusiasts and neophytes alike … should be enjoyed with a glass of your favorite ‘origin’ in hand.” – George Sandeman, Sogrape Vinhos, Portugal.

Mike Veseth is professor emeritus of international political economy at the University of Puget Sound. He is editor of the award-winning blog The Wine Economist and author of several books on wine.

CRISPR People: The Science and Ethics of Editing Humans

Memories of the furore that erupted when Dolly, the cloned sheep minced her way onto a global centre stage in 1996 have never left me. The world was aghast yet intrigued and the ethical debate that’s raged on ever since is just as vehement today, if not more.

As science and technology evolve to conquer hurdles and push boundaries at an ever-increasing pace, so do the questions about just how far science should extend its clever fingers. Dolly became a household name and was the first animal cloned from an adult cell. In this book, CRISPR People: The Science and Ethics of Editing Humans by Henry T. Greely, we read about more recent DNA manipulation and what it means to humankind.

CRISPR (Clustered Regularly Interspaced Short Palindromic Repeats) is a way of finding a specific bit of DNA inside a cell. Technology has the potential to transform medicine, enabling us to not only treat but also prevent many diseases. Gene editing has endless applications. It can be used to make plants more resistant to devastating diseases. It can play an important role in the adaptation to climate change. In health, we are already seeing promising results in preventing disease.

However, are we ready for human embryo editing?

Researchers conducted the first experiments using the technique to edit human embryos in 2015. Since then, a handful of teams around the world have begun to explore the process, which aims to make precise edits to genes. But such studies are still rare and are generally strictly regulated.

In China, however, in 2018, the first designer babies came onto the scene thanks to He Jiankui, the biophysicist who announced that he had created the world’s first gene-edited babies – twin girls called Lulu and Nana.

CRISPR People: The Science and Ethics of Editing Humans takes a cautionary and well-researched stance on He’s action, documenting the process and discussing the repercussions of ‘germline editing’ and its impact on future reproduction, families, and society in general.

“Starting from the Crispr babies affair, Greely explores what an ethical framework for editing the human germline could look like. When would it be justified, how (and by whom) should it be regulated, and what would the impacts be for society. An excellent and thought-provoking read.” – Kate, Verified Purchase

Henry T. Greely is Professor of Law, Professor by courtesy of Genetics, Stanford School of Medicine; Director, Centre for Law and the Biosciences; Director, Stanford Program in Neuroscience and Society; and Chair, Steering Committee of the Centre for Biomedical Ethics. He specialises in the ethical, legal, and social implications of new biomedical technologies, particularly those related to genetics, assisted reproduction, neuroscience, or stem cell research.