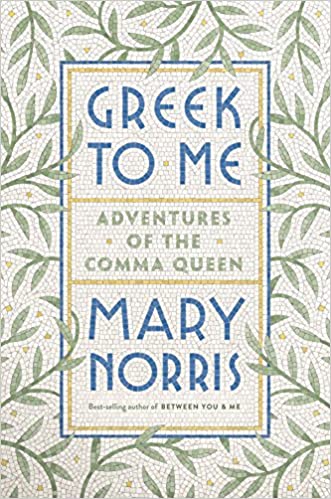 Greek To Me; Adventures of the Comma Queen

The idiom: ‘It’s all Greek to me’ means feeling flummoxed about something; that you just want to put the subject into the too hard basket to be dealt with by someone in the know. The metaphor is put to use in many contexts, as mentioned by monks of the Middle Age and Shakespeare’s Julius Caesar in the early days of discovering what an incomprehensible world we live in.

When I picked up Greek To Me; Adventures of the Comma Queen from my local library, I opened it expecting to find a collection of witticisms explaining not only tricky 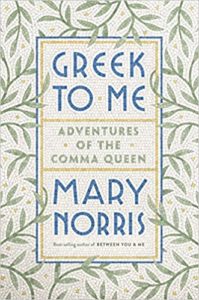 Greek To Me; Adventures of the Comma Queen

The idiom: ‘It’s all Greek to me’ means feeling flummoxed about something; that you just want to put the subject into the too hard basket to be dealt with by someone in the know. The metaphor is put to use in many contexts, as mentioned by monks of the Middle Age and Shakespeare’s Julius Caesar in the early days of discovering what an incomprehensible world we live in.

When I picked up Greek To Me; Adventures of the Comma Queen from my local library, I opened it expecting to find a collection of witticisms explaining not only tricky subjects that people struggle to get their heads around, but also the importance of good grammar. Mary Norris’ Greek To Me proved to be quite the contrary. Hers is a fascinating account of all things Greek in an entirely literal sense, and you won’t be relegating this true story to the too hard basket any time soon.

Mary reveals how her “lust for Latin” quashed by the irreproachable negativity of her father propelled her to a love of Greek instead. Her subsequent, almost fanatical pursuit of all things Greek led her to realise how a single syllable mispronounced can lead to misinterpreted meaning of the worst kind … It also enabled her to lose herself by diving into Homer’s wine-dark sea, as a true philhellene.

She follows his path and that of other famous scribes, visiting some of the most beautiful islands in the world whilst supping on ouzo and green olives, to read and speak and live the language of the ancients. As a fellow philhellene (lover of Greek culture) you will love Mary’s charming take on all things Greek; and even if you’ve never thought about it before, the alphabet, language, culture, and mythology are bound to make you consider a love affair with all things Greek too.

“An utterly enchanting read! I loved it. Easy to pick up and put down, reading longer or shorter stretches at a time, without losing the thread. For anyone who has a passion for Greece and all things Greek, and/or a knowledge or even a smattering of Greek, it is a must and a joy! The author’s understated humour is a delight, and her mispronunciations resulting in some interesting variations on a theme, hilarious.” – Lilliput, UK, 2019 (verified purchaser)

I now want to get copies for like-minded friends – as well as my classics-obsessed 15-year-old daughter who inspires me to share her love of how much of our world was shaped by Greek. 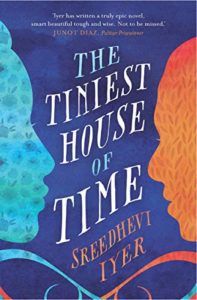 The Tiniest House of Time

Immersing yourself into an epic tale of family secrets, dynamics, and drama one cold wet day is the green prescription your doctor might be wise to order. Full of evocative reference to pre-war Burma and post-colonial Malaysia, The Tiniest House of Time by Sreedhevi Iyer is a wonderful story that ranges back and forth from decade to decade, skilfully weaving and wending its way to reveal the unsubtle nuances of colonial rule, prejudice, migration, and conflict.

Susheela was an Indian child growing up in the ‘30s when anti-colonial riots created havoc on her beloved Burma. She is later forced to join the Hindu exodus to India during WWII. Sandhya is raised in Malaysia, out of the same trajectory of displacement as her grandmother. As an activist in Kuala Lumpur living during the ’90s, she exists and participates in an era of political awakening.

Both women of their times, the young, sophisticated Sandhya speaks to her grandmother Susheela on her deathbed in a final quest for knowledge about the racial complexities this Tamil Indian family faced and their diaspora due to circumstance.

By delving into the tiniest houses of time, we read about an intergenerational story of how history repeats itself, that as always, history works in cycles, until Sandhya whispers to her dying Sansheela: “Yes, I hear you, Paatti. I am not worried, I will not grieve. Everything is okay. You are right. Everything that has happened, has always already happened.”

A Goodreads review by Alison: “I thoroughly enjoyed this historical epic, balanced between the dying days of the Raj in Rangoon and Kuala Lumpur in the 1990s Reformasi movement, tied together by love stories of various kinds, but most especially between a grandmother and her granddaughter.”

The Tiniest House of Time is the well-researched debut novel by Sreedhevi Iyer, an Indian-Malaysian-Australian author. Her fiction work has been nominated for a Pushcart Prize in the United States, along with publications in literary journals in Australia, Malaysia, United States, and Sweden. She currently teaches Creative Writing at City University Hong Kong, where she is doing her PhD in English.

The introduction to Hood Feminism; Notes from the Women White Feminists Forgot poses the statement (abridged): We rarely talk about basic needs as a feminist issue. Food insecurity, access to quality education, safe neighbourhoods, a living wage, and medical care … For a movement that is meant to represent all women, feminism often focuses on increasing privilege for women who already have most of their needs met.

Mikki Kendall writes an uncomfortable story about how race, gender, and class affect women’s rights to be treated fairly and respectfully; how her life in the ‘hood’ taught her that being a good girl, got you nowhere; and how the only voice that can be heard to provoke change is the one that yells the loudest; and how for Black women, feminism is more about survival than hitting the proverbial glass ceiling.

Hood Feminism; Notes from the Women White Feminists Forgot dives deep not only into what they forgot but also what they never knew before now. It tackles the issues faced by most women, instead of those faced by only a few, and it’s a popular topic; between June 28, 2020, and June 20, 2021, the book entered the Los Angeles Times’sbestsellers list eight times. Time listed the book as one of ‘100 Must-Read Books of 2020’.

“This is a book that all who claim to be a feminist and those who do not, should read in order to truly gain knowledge and perspective on issues that affect women in communities of color … to shift the narrative, bring awareness and create a space in the movement for ALL women to feel seen, heard, supported and welcome.” – Destiny, US, 2020 (verified purchaser)

Mikki Kendall is a writer, blogger, and speaker who has written for numerous media including the Guardian and Time. She is a spokesperson for all marginalised women; a Black girl who has discussed race, feminism, violence in Chicago on Huffington Post Live and BBC’s Women’s Hour. She’s an advocate hell-bent on seeing that the most basic rights for indigenous women are recognised and met and she’s not afraid to fight dirty. 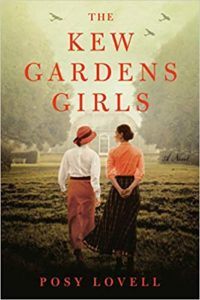 When half of London’s male population troops off to fight in World War One, they leave behind not just their families but their jobs as well. In the midst of England’s Suffragette movement, an extra challenge appears for the women left behind – acceptance into the workforce. When a “bunch of namby-pamby lady poets and maiden aunts” queue up to apply for recently-vacated gardening roles at London’s iconic Royal Botanical Gardens in Kew, gruff head gardener Mac doesn’t believe they’ll be able to handle the job.

From the jump, The Kew Gardens Girls is a story about female friendship, strength, solidarity and achievement. Two of our main characters – Ivy, a teenager looking to provide for her family, and Louisa, who’s moved to Kent to escape an abusive husband – bond immediately and silently over their shared involvement with the Suffragettes. Later, we meet another, unexpected ally: titled Lady, gardener and activist “Win”. All three find solace and purpose in learning and caring for Kew Gardens, and as the story progresses, Lovell puts her journalistic skills to good use, weaving together historical fact with a healthy dose of imaginative fiction.

The Kew Gardens Girls is clearly well researched, and the activities of the Suffragette movement and the women gardener’s fight for equal pay create a fascinating space for Lovell’s characters to play within. An intriguing, dynamic, and diversely opinionated cast results in no shortage of believable growth and conflict, effectively holding the story back from becoming overwhelmingly wholesome. Lovell doesn’t skate over some of the Suffragette’s more questionable actions (and the effects they had on those targeted), but she also emphasises the sense of sisterhood and personal growth within a community of women fighting for their right to exist on an even playing field with their men.

S Beucher (UK, 2020, verified purchaser) sums up my thoughts on this one – “ … a lesson on how healing and calming gardening & tending to plants is, especially in difficult times … I read it in one afternoon on the beach. And I think it is just that: a quick, lovely read, a beautiful botanical background, some insight into the Suffragette movement during WW1, feminism, and romance.”