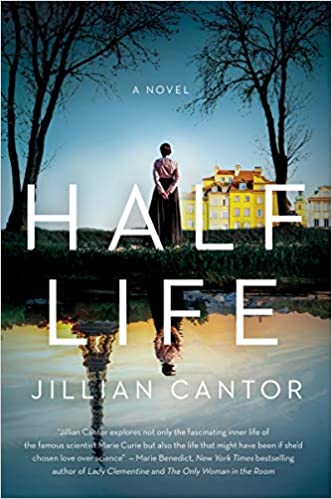 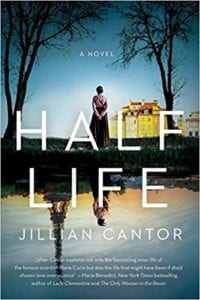 Half Life
By Jillian Cantor[/caption]

Half Life
By Jillian Cantor

Faced with the decision on whether to follow your heart or your intellect, what would you do? Some would argue that it’s possible to do both. But imagine you were born in a time of austere gender, culture, and class distinction. Would the opportunity to explore a profession as well as a love life be quite so prominent?

In 1891, Marya is enamoured with a beautiful man called Kazimierz. But he is a cut above Marya, and as his mother regards her as worthless there seems to be little hope of marriage.

In 1891, Marie sits as the only woman in her Sorbonne University physics lecture, surrounded by medical students. She is pushing herself to excel; to pass her exams at the top of the class.

“You have a choice. There is always a choice.”

Marya is poor and motherless, but intellectually brilliant. Her father scrapes together enough to allow Marya to leave her Russian Poland home of Warsaw (where it is illegal for women to obtain a university education) and move to Paris to study and pursue her love of science.

At the train station, her heart and mind are turned topsy-turvy again as her beau arrives to beseech her to stay. She’s faced with a tumultuous decision.

“You have a choice. There is always a choice.”

Switching back and forth from one possible life scenario to another; first, based in Warsaw, second, in Paris, Half Lifepivots and spins as the author allows Marie/Marya to explore alternative lives, both as paradoxical as could possibly be.

In a clever ‘sliding doors’ rendition Half Life examines how the life of one remarkable woman – and the people she loved, as well as the world at large and the course of science and history – might have been irrevocably changed had future Nobel prize winner, Marie Curie, chosen a different path.

Seamlessly entwining the fictional life of Marya Zorawska with Marie Curie’s real story, this is a powerful story of love and friendship, motherhood and sisterhood, fame, and anonymity – and a woman destined to change the world.

“This will be the least profound thing I can say… READ THIS BOOK! Seriously, this novel is beautiful, interesting, well-researched, and different! What do I mean by different? How many WW2 fiction novels can you find? Now, how many historical fiction novels about the spectacular Marie Curie can you find? Exactly. This is a gem.” –  Nicole, Reviewer from Goodreads.

Jillian Cantor is a US university-qualified writer and internationally bestselling author of eleven novels for teens and adults, which have been chosen for LibraryReads, Indie Next, Amazon Best of the Month and have been translated into 13 languages. 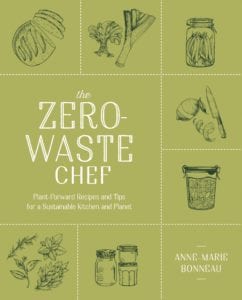 The Zero-Waste Chef; Plant-Forward Recipes and Tips for a Sustainable Kitchen and Planet
By Anne-Marie Bonneau

The Zero-Waste Chef; Plant-Forward Recipes and Tips for a Sustainable Kitchen and Planet

With chapter titles like Changing the culture: Fermentation; Cooking like Grandma; You can make that? Staples and Scraps, this beautifully presented (in my favourite avocado green no less) cookbook is a blessing for 20th-century living.

Illustrated with gorgeous rustic photos and laid out in a sensible, helpful manner, The Zero-Waste Cookbook by Anne-Marie Bonneau is modern-day food wisdom in disguise. As consumers, we all know about the woes of food scarcity, waste, and the positive move away from fast food culture. We might be wondering (and if we aren’t, p’raps we should be?) how we can make a small but long term difference. Here we have solutions galore. And delicious ones at that!

Anne-Marie Bonneau has pursued the lifestyle ideal of zero waste since 2011. She gently advises that living with a zero-waste philosophy can be an intention, rather than a rule, and very practically points out that if we all try just a tiny bit harder to follow the plan, the bigger picture will evolve into something greater than ourselves.

That bigger picture starts small-scale in this book; there’s a whole chapter on the up and coming (yet incredibly historic) sourdough – and if you don’t have the recommended Dutch oven, dough scraper, lame (a specialised razor blade used for scoring your loaf) or banneton basket, don’t despair: Anne-Marie Bonneau includes a list of alternative tools that will suffice.

I was fascinated by the fermentation chapter. Some folks are familiar with the likes of kombucha – possibly converts to this healthful tea-based drink. Anne-Marie explains the ease with which it’s made and how in all situations the process begins with: fill a jar with food, cover it, and wait. The waiting bit is what Anne-Marie wants to gel, because without the pause, the patience, the time, how can the slow-food movement ever become ubiquitous?

The Zero-Waste Cookbook is chock-a-block with simple goodness, and all for a universally-respected cause. It’s not in the slightest bit ‘lectury’ – quite the contrary – so please, dive on in and have a browse for yourself. You’ll find out just how easy and tasty it is to do your bit towards being thrifty with food.

“… there is a suggestion of how to use any leftovers. This way of cooking saves you money and time because you use everything! Anne-Marie encourages progress, not perfection! I can make a difference right here and right now for our planet and our future.” – Jamie (verified purchaser.)

Anne-Marie is a food blogger and her Instagram account @ZeroWasteChef has almost 200K followers – and growing. Her popularity reflects the ‘slow food’ practice so loved by loke home cooks worldwide. 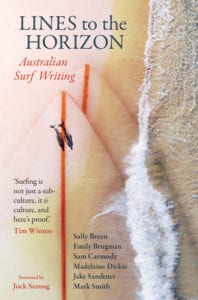 Rating: 4 out of 5 on Goodreads

Every country has a unique culture that needs exploring. And as four-time winner of Australia’s most prominent literary Miles Franklin Award Tim Winton says: “Surfing is not just a subculture, it is culture, and here’s proof,” and he’d be right. That proof lies in Lines to the Horizon; Australian Surf Writing.

Anyone living near a good surf break – and there are thousands worldwide – would agree that surfing certainly is a culture; it’s a scene, and one that sometimes enters the realm of the mystical.

What is it about surfing that intrigues, captivates, and hooks its followers so vehemently? And not just those who indulge in the eternal pursuit of the best surf lines, but also those who watch from afar, envious of the passion those sun-kissed, salt-bleached bodies exhibit. Is it the lifestyle, the freedom, the isolation of being ‘at one’ with the Sea and all her moody challenges?

Writing about the art of surfing is a challenge in its own right, but here within the pages of Lines to the Horizon; Australian Surf Writing you might just glean an understanding of the fascination and drama this pastime represents. Because it needs to be represented, and the stories need to be told to carry the surf culture forward in a literary sense.

Surfing can’t just stay in the minds-eye of the spring-suited beanie-clad partaker as he or she watches the local lines in preparation for an evening surf. Those personal observations are all too fleeting; impermanent; and they morph from day to day, season to season according to Mother Nature.

Maybe we’d like to understand the philosophy behind the practice of surfing, too; to make it tangible, and help us as bystanders click with the culture.

This book lets us do just that. Lines to the Horizon; Australian Surf Writing is comprised of a compilation of short stories written by six well-qualified contributors. Some are surfers; all are skilled narrators with literary track records that will make your eyes water. More importantly, half are women: a significant move into the pool of 21st-century surf writers who are unshackled by gender.

Their hope is to firm up the ephemerality of surfing and transform the experience into a timeless  hard copy book that will take the surfing culture into the heart of the reader and allow us to explore its unlimited horizons.

“An anthology that celebrates the diversity of surf culture – the passion, the fear, the bliss and the pain. Glorious and insightful – words that speak to me.” – Favel Parrett. 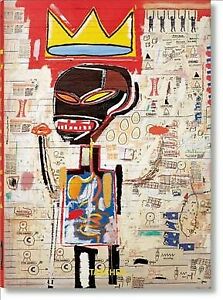 Jean-Michel Basquiat and the Art of Storytelling
By Eleanor Nairne

Jean-Michel Basquiat and the Art of Storytelling

I’m an art lover from way back. Over the years, I’ve adorned the walls of my home – sometimes one above the other – with local art, op-shop treasures, or classics serendipitously purchased before the artist became a pretty-sight more famous! Fortunately, my walls are very tall because there’s room for more and fill them I will. All have meaning, and all speak of a period of my life I have captured on a whim.

Jean-Michel Basquiat’s paintings are of a life he’s ensnared as well. For the art appreciator, the value of a painting lies in how it speaks, what it says. Jean-Michel’s work not only speaks; it shouts, exclaims, and laments. His technique has such energy and focus and strength that every work cries out to be noticed, absorbed, and FELT. Simplistic, symbolic, graffiti-like, and slightly macabre, his art is inspired and derived from every essence of life his existence as a young, Black American artist in New York proffered.

Jean-Michel says, and I quote: “I don’t think about art when I’m working, I think about life.”

In 1983, he collaborated with Andy Warhol and amid the public accusations of mutual reliance, the two created a body of work that endures and actually becomes more relevant than ever, over three decades on.

Jean-Michel Basquiat and the Art of Storytelling certainly lives by its moniker. The book tells so many stories – about Jean-Michel’s fascinating life, his many influences and mediums, the exploration of his Black cultural memory, his stellar trajectory to fame and his almost as quick descent to an early demise, age 27.

With pristine reproductions of his most seminal paintings, drawings, and notebook sketches, Jean-Michel Basquiat and the Art of Storytelling beautifully displays the work that’s been described by critics as primitive, raw, and violent.. This monographic account offers undiscovered details and new layers of meaning to those comments. It’s exactly what Jean-Michel Basquiat and the Art of Storytelling with its generous selection of works, was created for.

“This is more than a heavy-weight coffee table book; it’s a tome of insight into our urban culture and a work of art in its own right.” – J. Nelson

TASCHEN is a carbon-neutral publisher. Each year, they offset their carbon emissions with credits at Instituto Terra reforestation program in Brazil.