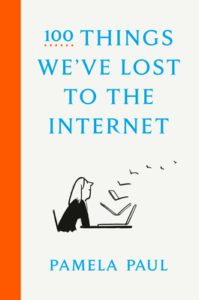 100 Things We’ve Lost to the Internet

100 Things We’ve Lost to the Internet

Like the author of 100 Things We’ve Lost to the Internet Pamela Paul, I am no Luddite. I enjoy connecting with friends and family via social media; I love the ease of getting Google to answer my questions (which, because of that same ease, I instantly forget); I appreciate being able to book bus trips, track purchases, and find my way around (thanks Google Maps). And as much of my job requires the Internet, I’m blessed to have it.

But the Internet does away with real-life communication. Almost daily, my Facebook feed prompts me to let my friend know I’m “thinking of them” by sending a virtual “happy birthday” message. I’m inundated with these promptings, and I wonder how many lonely people sit waiting for the notifications which tell them someone ‘cares’?

Social connection (companionship, friendship, belonging) is a basic need. The Internet has taken that necessity, muted it, and redirected it to be assuaged – or heightened – within its own realms. We can apparently exist, self-contained and metaphorically content, in the bubble of a virtual world.

This physical connection is just one of the 100 Things We’ve Lost to the Internet, and in my opinion, it’s the most damaging of those Pamela Paul cites in her book. Naturally, there are 100 or more Internet benefits to be recognised, too, but there’s something insidious about the Internet’s knack for sucking us in. It’s crept subtly, gained sophistication rapidly and suddenly swamped us with its omnipresence. It seems that we have absorbed its existence and become so quickly reliant on its facilities that many of the ‘good old days’ pre-Internet (only a few years past) are now riddled with nostalgia.

Take a moment to flick through 100 Things We’ve Lost to the Internet and remember what we’ve unthinkingly given away: leisure time on holiday sans emails, the joy of creating a family photo album, the satisfyingly crisp sensation of opening a new paperback novel (goodbye Kobo), even making eye contact at breakfast time. Pamela Paul invites you to share her swan song for a disappearing era – and maybe reclaim a little bit of the world as it was.

“[A] rare feat of exploring what technology has done to us without succumbing to doom and panic … Poignant, thought-provoking.” – The Guardian 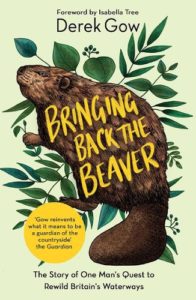 Bringing Back the Beaver; The Story of One Man’s Quest to Rewild Britain’s Waterways

My husband snaffled up Bringing Back the Beaver before I could grumble and devoured it in one quick mouthful. I heard him chuckling and having a fine old time of it until, within a day, he was done, and I was able to snatch up the book and absorb some of its enchantment myself.

In New Zealand, although we have a plethora of wild, imported, and indigenous animals at our doorstep, the beaver isn’t one of them. It’s a shame because this water dweller is one of the cleverest creatures on the planet. As a “keystone species” – architect of the waterways, creator of new habitats for other species, and restorer of natural hydrology – the beaver’s positive effect on ecology is astounding.

Native to Britain, the beaver was hunted to extinction in its home country by the 16th century due to the virtue of its sleek, water-repellent fur, meat and ‘castoreum’ – a secretion used in perfumes, food and medicine. Famously playing a peace-loving role in C.S Lewis’ The Chronicles of Narnia, and currently supported by various rewilding enterprises, it still struggled to regain status until author of Bringing Back the Beaver Derek Gow took up the gauntlet and began wielding it with ferocious intent.

There’s a raft of scientifically acknowledged info on why or why not it should be re-introduced to Britain’s many waterways (which number around 90,000km or so). Derek Gow takes it all on board but says the time for gathering data is over – he wants action – and there’s no better man for the beaver to have onside.

Gow knows his stuff. He acquired his knowledge of wildlife and animal husbandry through hands-on experience, powers of observation, and voracious reading. A visit to naturalist Gerald Durrell’s sanctuary in 1990 (having consumed the great man’s excellent books – as have I) left Gow blazing with his commitment to “the salvation of wild creatures”. Taking the beaver under his wing has already led to starter populations in Scotland, trials in Devon and a tranche of public awareness and goodwill. Like dozens of other species and natural landscapes Gow has fought to restore, the beaver’s finally in with a good show.

‘This short, tub-thumping book spares no one…Gow has a fire in his belly. We need more like him.’–BBC Wildlife Magazine 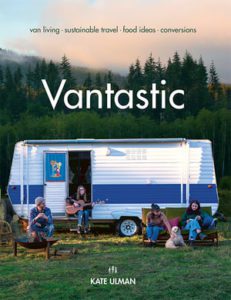 Rating: 5 out of 5 on Booktopia

Skipping out of town on an escapade to anywhere is something we’ve all yearned to do. And why not up sticks, see the country, explore a little? A new location, perhaps, that resonates with where your body, mind and soul might be right now. For whatever reason, doing a bit of research, breaking ties with your usual domicile, and hitting an unfamiliar road could be all the green prescription you need to achieve good health and happiness. Vantastic by Kate Ulman shows you how.

Happiness can be the excitement of not knowing what’s ahead (or even how to get there). Couple that with the frisson of realising you’re free as a bird, with an itinerary only if desired, and you realise that the idea (and actuality) of making your movable van your home is undeniably liberating. For Vantastic author Kate Ulman and husband Brendon, that seed of an idea was planted and then nurtured for several months.

Once they had purchased vintage van Frankie Blue, the seedling concept fully bloomed into a journey of a lifetime, and the family of five embarked on their six-month trip around Australia – an adventure repeated in different directions and durations in time to come.

The spontaneity of choosing a life that moves swiftly over terra firma is one thing; putting in some prep time to streamline the journey is another. Ulman offers sensible tips on how to maximise the pleasure factor from your decision to shoot the breeze and go. She teaches you to speak “van and RV” (Recreational Vehicle), how to get to grips with your van’s technical foibles, and to fit it out to be more environmentally sustainable. She shares the satisfaction of decorating it in a style that suits and tends to your creature comforts. She helps you manage the art of succinct packing, understand the importance of stashing the right types of food, and how to work in step with the seasons when topping up supplies. And, of course, the sensibilities of sacrificing a few luxuries in the name of adventure.

Sounds like fun and games most of the time, but there’s a surprising amount to learn about becoming part of the ‘van clan’. If you aren’t one to leave anything to chance – and we’re not all spur of the moment types – Vantastic is your RV bible. It’s jampacked with practical advice and a genuine zest for travel that will spur you on to your next destination! 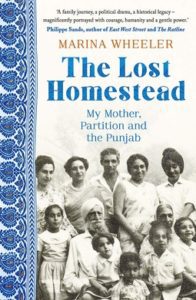 The Lost Homestead; My Mother, Partition and the Punjab

My history-buff partner picked up this book before I could get a look in: The Lost Homestead; My Mother, Partition and the Punjab by Marina Wheeler. I watched him surge his way through and noted at the end a couple of surreptitious face wipes; tears they were. And indeed, The Lost Homestead is a poignant commentary on the 1947 partition of India.

A partition is a division. When a country endures the physicality of the word, it means people having to leave their family homes, fearful and often in haste, to resettle in another area free from the threat of new rule. The partition of India as outlined in the Indian Independence Act 1947 divided British India into India and Pakistan and resulted in the dissolution of the British Raj (Crown rule). It displaced around 10 and 20 million people based on religion, killed several hundred thousand, and was considered one of the largest refugee crises in history.

Author of The Lost Homestead, Marina Wheeler is the daughter of Kuldip Singh – also known as Dip (pronounced Deep) – whose memories form the basis of this story. The title of the book refers to Dip’s childhood home in Punjab; Sargodha, Lahore (now in Pakistan), from where she escaped as a teenager. Advised by her wealthy Sikh father, Harbans Singh (Papa-ji), to forget her previous life and start afresh in Delhi, Dip studies, marries, divorces, and supports herself until marrying BBC correspondent Charles Wheeler in 1962. Together, they leave India for good and emigrate to Berlin, then to Washington DC, where the fight for civil rights embraces the ideals of Mahatma Gandhi.

German-born Marina documents her mother’s experiences, visiting India and Pakistan, tracing Dip’s story whilst corroborating it with historical fact. She attempts to explain how the people – her people – rebuilt lives and loves in new, unfamiliar nations. She inserts her own thoughts, memories, and feelings, too, for The Lost Homestead is also her story.

Marina Wheeler QC is a British lawyer, author, columnist, and ex-wife of British Prime Minister Boris Johnson. As a barrister, she specialises in public law, including human rights, and is a member of the Bar Disciplinary Tribunal. She was appointed Queen’s Counsel in 2016.

“This book is more than a family memoir – it is an insightful glimpse into the way small worlds are forever changed by the impersonal currents of history.” – Shashi Tharoor, author of Inglorious Empire: What the British Did to India