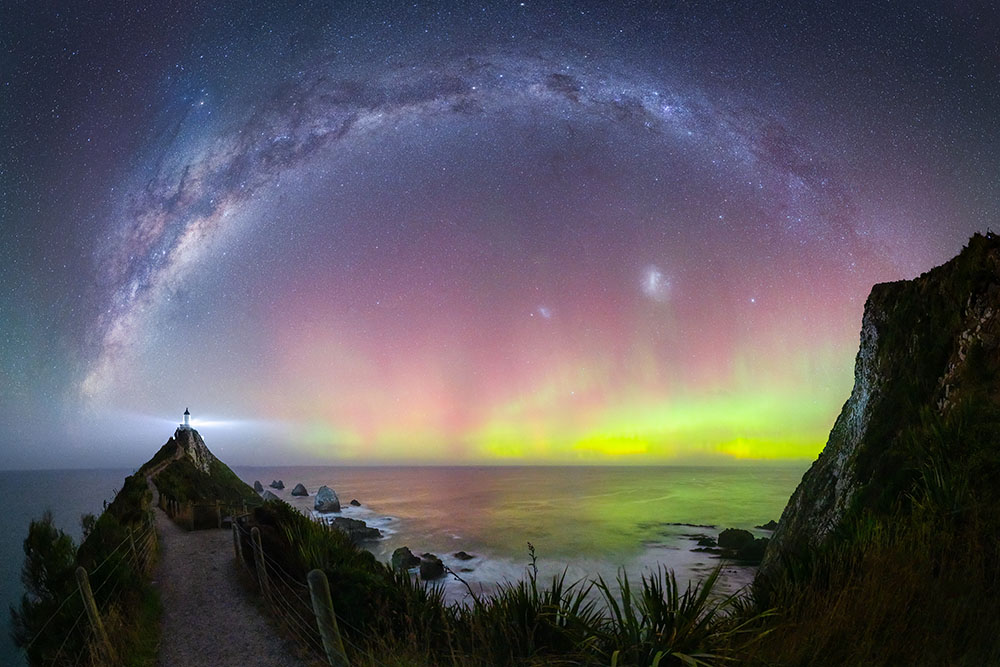 Aurora – the biggest display of lights on Earth

The aurora polaris - a magnificent flickering light dancing across the night sky - has fascinated people for thousands of years.

Long before scientists could understand and explain the origin of auroras, people believed in myths and legends explaining this mysterious phenomenon. The word ‘aurora’ itself is derived from the name of the Roman goddess of the dawn, Aurora, who travelled from east to west announcing the arrival of her brother, Helios, god of the Sun (Wikipedia).

The Vikings believed the northern lights illuminating the sky were reflections of the Valkyries' (mythical female warriors) armour as they led the souls of dead warriors to Valhalla, the residence of their chief god Odin.

The aurora polaris – a magnificent flickering light dancing across the night sky – has fascinated people for thousands of years.

Long before scientists could understand and explain the origin of auroras, people believed in myths and legends explaining this mysterious phenomenon. The word ‘aurora’ itself is derived from the name of the Roman goddess of the dawn, Aurora, who travelled from east to west announcing the arrival of her brother, Helios, god of the Sun (Wikipedia).

The Vikings believed the northern lights illuminating the sky were reflections of the Valkyries’ (mythical female warriors) armour as they led the souls of dead warriors to Valhalla, the residence of their chief god Odin.

For Indigenous Finno-Ugric people, the Sámi, the appearance of the northern lights was a bad omen. The Sámi believed them to be the souls of the dead, that could carry you up into the sky. To this day, many Sámi stay indoors when the northern lights are illuminating the sky, just to be on the safe side.

In Finland, people believed the northern lights were created by fire foxes running through the sky so fast that when their large, furry tails brushed against the mountains, they created sparks that lit up the sky.

Estonians believed that the bright lighting of the skies represented sleighs taking guests to a spectacular wedding celebration in the heavens.

In Icelandic folklore, the northern lights were believed to help ease the pain of childbirth, but pregnant women were not to look directly at them, or their child would be born cross-eyed.

In Greenland, people held the belief that the lights were the spirits of children who had died in childbirth, dancing across the sky.

Many of the stories surrounding the northern lights in North American communities arose from the belief that they were the souls of departed ancestors. Eskimo tribes believed they could summon the aurora to converse with their dead relatives, and Cree Indians believed that the lights were a way of communicating with their ancestors. In Canada and Northern Michigan, Algonquin tribes believed that God moved to the far north and lit a huge fire, and the aurora was a reflection of this fire.

Swedish fishermen looked forward to seeing the aurora, as they thought the lights were the reflections of giant schools of herring swimming nearby. For them, an aurora sighting brought good fortune and the promise of a hefty catch.

The Scots called the northern lights “Merry Dancers”, but, despite the cheery name, the ‘dancers’ depicted fallen angels or sky warriors engaged in epic battle.

In New Zealand, the Māori called the southern lights “Ngā Kahukura o Hine Nui Te Po”: the rainbow of the goddess of darkness. Some interpreted their glimpses of the aurora australis as reflected light from torches or campfires from previous generations who had travelled south and settled there. 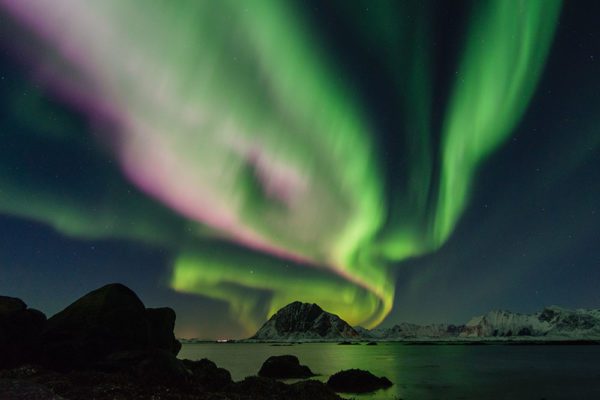 It wasn’t until the 20th century that the aurora polaris phenomenon was scientifically described. Auroras happen as a result of solar activity, when flares come off solar spots and light up gases in the Earth’s upper atmosphere. The word polaris refers to the fact that auroras are specific to the North and South Pole regions. Aurora borealis (northern lights) occurs in the Northern Hemisphere near the Arctic Circle, while aurora australis (southern lights) appears in the Southern Hemisphere, near the Antarctic Circle. The colours of the aurora are determined by which gases are being excited by the solar plasma.

According to Dr Annika Seppälä, Senior Lecturer at Otago University Department of Physics, “Norwegian scientist Kristian Birkeland was the first to explain the processes behind aurora. Around 1895, Birkeland made experiments using a ‘terrella’ sphere – a magnetised sphere the likes of which are still used these days to demonstrate how aurora is created. In 1899-1900, Birkeland organised the Norwegian Aurora Polaris Expedition to the northern hemisphere polar region and the measurements made during the expedition confirmed his earlier discoveries.”

Birkeland’s theory was disputed by his contemporaries, and it was only in 1967 that proof of his theory of the aurora came in after a probe was sent into space.

Scientists are still learning about solar activity, solar weather and how this affects the Earth’s magnetic field. The Sun is constantly vibrating as a result of its own inner boiling turmoil.

Solar weather or space weather describes the variations in the space environment between the Sun and Earth. Space weather can occur anywhere from the surface of the Sun to the surface of Earth. It’s characterised by several phenomena, such as:

Solar wind – protons and electrons in a state known as a plasma continuously flowing outward from the Sun due to an expansion of its corona.

Sunspots – temporary spots on the surface of the Sun that are darker than the surrounding areas. 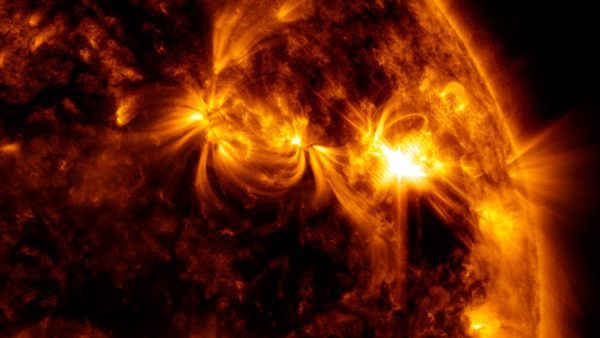 Solar flares – large eruptions of electromagnetic radiation from the sunspots.

Geomagnetic storms – fluctuations in the Earth’s magnetic field, caused by changes in the solar wind and interplanetary magnetic field.

Aurora – a natural display of lights caused by solar activity.

In March 2021, the University of Otago launched The Solar Tsunamis Endeavour Programme as an international collaboration to understand how New Zealand’s energy infrastructure will be impacted by an extreme space weather event. The five-year programme, headed by Professor Craig Rodger, a space physicist at Otago University, brings together scientists from Britain, USA, Canada, Switzerland, three New Zealand universities (Otago, Canterbury, and Victoria), as well as the GNS Research Institute and industry partners Transpower and Firstgas Group.

“Our project is about how changes in the Earth’s magnetic field triggered by the Sun’s activity can create electric fields on the surface of the Earth that can cause damage to the power grid or the pipelines. Some of the research is about global impacts [of an extreme space weather event], but we want to know about the risk to New Zealand,” Prof. Rodger says, and tells me that when an extreme solar event happens, such as a solar tsunami, it can cause havoc with the electricity supply equipment and gas pipelines on Earth. It will also trigger the aurora, which will be visible way beyond the Antarctic circle. “When we have a big magnetic storm, there will be a great aurora over New Zealand. When the last solar tsunami happened in 1859, the aurora was seen north of Auckland. In 1921 the aurora was seen in Samoa!” he exclaims.

So, can extreme solar events be predicted?

According to Prof. Rodger, they can: “Unlike earthquakes where we do not have a good scientific way of truly predicting an earthquake, the magnetic storms are caused by the Sun exploding and throwing out a cloud of material. If it’s going towards the Earth, we can see this happen and we are getting better at forecasting whether or not it’ll hit the Earth and what the impact will be.”

Auroras can also be forecast. A multitude of websites exist that inform of the likelihood of aurora being present, e.g. auroraalert.otago.ac.nz, or spaceweather.com.

Science tells us that solar activity is cyclical and is measured in the number of sunspots. The solar cycle is approximately 11 years long. During that time, the Sun’s stormy behaviour builds to a maximum then settles back down to a minimum before another cycle begins. This activity has been observed by astronomers for centuries. Sunspots were first systematically observed by Galileo Galilei and contemporaries from around 1609.

Swiss astronomer Rudolf Wolf compiled these observations, reconstructing the cycles back to Galileo’s earliest sightings of sunspots. According to Wolf’s traditional numbering system, the 1755–1766 cycle is numbered 1. We are currently in the 25th cycle and are just heading towards a solar maximum. Hence good displays of southern lights were recorded recently in Otago and Southland.

Here are some hints for watching the southern lights (aurora australis) from New Zealand:

What you can expect to see is a bright glow on the horizon, as if there was a big city in the distance. The sky may become brighter and darker again and continue alternating between the two. Sometimes you can see shafts of light, similar to laser beams used at outdoor events.

In New Zealand you are unlikely to see different colours with the naked eye. But colours will come out in photos taken with a very long exposure from a camera mounted on a tripod.

Even today, with all of our scientific explanations of the aurora, seeing the southern lights can still feel like an unearthly spiritual experience.