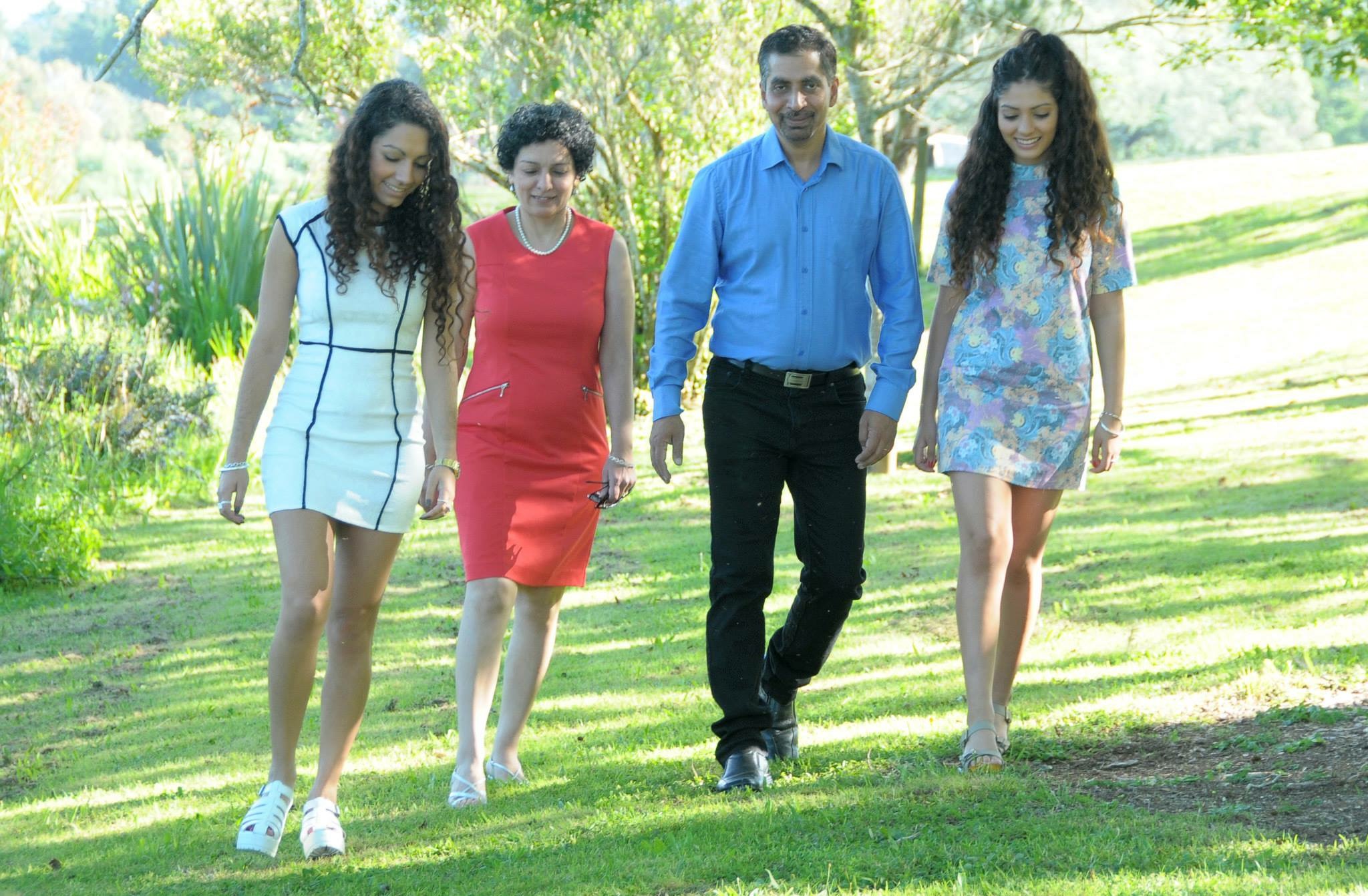 Arun Chaudhari: The Man behind the Chamber

Born in the port city of Mumbai, Arun Chaudhari grew up looking out at the harbour. He could see grand, steel forms sitting on the water; massive floating constructions, laden down with cargo piled sky-high. There were comings, goings, shouts, whistles, and cranes reaching towards heaven, groaning as they lifted and shifted goods, straining under the weight.

As a child, Arun was fascinated. These were merchant navy ships. The mystique and intrigue of those ships as they docked, unloaded, reloaded, then disappeared to a world unknown to Arun was intense. He determined that once of age, he would head for a life at sea.

Arun joined the National Maritime Academy in India, aged 17. He shone in his mandatory year-long training as an apprentice, then at the age of 18, flew to England to join his first

Born in the port city of Mumbai, Arun Chaudhari grew up looking out at the harbour. He could see grand, steel forms sitting on the water; massive floating constructions, laden down with cargo piled sky-high. There were comings, goings, shouts, whistles, and cranes reaching towards heaven, groaning as they lifted and shifted goods, straining under the weight.

As a child, Arun was fascinated. These were merchant navy ships. The mystique and intrigue of those ships as they docked, unloaded, reloaded, then disappeared to a world unknown to Arun was intense. He determined that once of age, he would head for a life at sea.

Arun joined the National Maritime Academy in India, aged 17. He shone in his mandatory year-long training as an apprentice, then at the age of 18, flew to England to join his first merchant ship – one of a 100-strong fleet. There, he discovered his sea legs with India’s largest shipping company and continued another three years of apprenticeship.

It was pretty tough onboard, but Arun was an exemplary student. His aptitude and attitude would stand him in good stead for a different kind of life awaiting him in years to come, but for now, it was all about watchkeeping, cargo stowage, ship maintenance, cleaning, and sitting exams.

Arun was in his element and proud to be part of one of the most cost-effective and efficient cargo-moving machinations on this planet. Cotton, oil, iron, grain, passengers, and containers that contained virtually anything were in his mandate to shift from port to port. He travelled the world, calling into some of New Zealand’s major ports, but it would be 20 years before he settled on dry land again.

During those 20 years, Arun worked for three major merchant navy shipping lines: Indian, Norwegian, and Singaporean. The Norwegian Wilhelmsen line was amongst the most established of those lines, in business since the 1800s.

After about ten years on ships, Arun met Sangeeta in Mumbai. It did not take them long to decide that they wanted to take on the voyage of life together. In time, Arun and Sangeeta’s lives were blessed by two lovely daughters, and while Arun worked on ships, he was fortunate his family could join him.

One day while on leave in Mumbai, good friends mentioned a visiting immigration lawyer and their plans to emigrate to New Zealand. They suggested Arun consider a move as well, but Arun’s family weren’t ready. They had two young children, and what’s more, a beautiful new home, decorated from top to toe with travelling treasures collected throughout their time sailing.

In a couple of years, they received a long letter from those friends whose immigration to New Zealand had gone without a hitch – and who loved it in their new country.

Arun and his family journeyed to New Zealand in 1995 to check the place out, then sat down in a quandary of indecision. They liked New Zealand, but the timing still wasn’t right, so they applied for the maximum four-year extension on their visas and went back to their work routines until 1999.

Come October that year, they planned to give it a go in New Zealand but also keep a functioning house in Mumbai to return to, if things went belly up. They paid a year’s worth of household bills in advance, packed about 240 kilos of their lives into baggage and landed at Auckland Airport.

It was a humorous arrival. Weighed down like pack horses, juggling at least six trolleys from the baggage collection area, and with Arun sweating profusely, the family caught the attention of a kind customs officer.

Arun was embarrassed. He tells me: “The customs officer takes one look at us and says, ‘Let me help you.’ That man – a government official – made sure he pushed most of those trolleys himself, got us into an airport shuttle and said: ‘Welcome to New Zealand.’ Nowhere else in the world would a uniformed government servant ever do that.”

A very nice first impression of their new home! But even so, the next few months weren’t easy. Although the family knew they’d be in for some hard work seeking employment, their bank balance was falling so rapidly, it seemed to defy the laws of gravity.

“We came to this country eyes wide open. We knew the job market was tough and that the maritime industry was offering few opportunities. But we had a nest egg to fall back on because we had prepared for these things to happen,” says Arun.

The family had only been in New Zealand a month when Arun had the opportunity to apply for a job at Port Taranaki. It was right up his alley (and was, in fact, a precursor of good things to come). This time round, however, he wasn’t successful.

It didn’t matter. Things would pan out differently in due course, and in the meantime, Arun was geared for the long haul. He soon landed a part-time job with Turners Car Auctions in Penrose as “General Dogsbody”. His pay was a princely $10.50 per hour – 50 cents over the minimum wage of the late ’90s; and wife Sangeeta found a job demonstrating Aunt Betty’s Christmas Puddings outside Pak’nSave, Mt Albert.

To this day, Arun has a soft spot for Turners as the first company willing to employ a rookie immigrant, but he dearly needed extra hours. He moved on to Auckland Airport’s Whitcoulls stores and continued to work weekends at Turners. The ungodly schedule meant he didn’t see his wife and kids much anymore, and as he’d also taken a massive drop in income since his seven years’ captaining supertankers, Arun felt he had more to offer.

Sangeeta was educated in the Catholic faith and had worked in India as a qualified schoolteacher. Her familiarity with the Sisters of Mercy helped her find employment as a teacher aide at Baradene College of the Sacred Heart, in Remuera. She was able to fulfil her wish to return to India during the first school break, while Arun took on a full-time job with the Bank of New Zealand. Then, just twelve months since setting foot in New Zealand, another job came up at Port Taranaki.

Arun was thrilled to be working with ships again. He called his wife, who was in India visiting her mum and said: “I’ll pick you up from Auckland airport, but we’ve got a new place now. I’ve moved to another city!”

The family rang in the new millennium celebrating Arun’s Kiwi dream job at Port Taranaki and Sangeeta’s at Sacred Heart Girls’ College in New Plymouth. Port Taranaki’s CEO, Roy Weaver, was a textbook leader. Arun thrived under his stewardship and described the working culture as one big hardworking happy family – many of whom remain in touch with each other today.

“My family and I feel that we’ve got so much from Taranaki, and we cannot be thankful enough to all those who have helped us through our New Zealand journey,” says Arun.

The feeling is mutual, it seems. Arun and Sangeeta’s involvement with the community is enthusiastic and limitless. Sangeeta would host Indian cooking classes through Adult Community Education, facilitate cooking for fundraising events at Sacred Heart Girls’ College, and involve herself and others with Diwali and other Indian community celebrations.

Arun studied for an MBA via Massey University and spent six years on the Chamber of Commerce board while working as a senior manager at the port. In 2014, large-scale restructuring meant his position at Port Taranaki came to an end, and he took up an opportunity at Port Timaru, working there for around 20 months. Sangeeta joined him and taught at Geraldine High School until the couple returned to New Plymouth in 2017.

Arun had been successful in his application for the CEO role of the Taranaki Chamber of Commerce, one of the oldest business advocate groups in the world. Taranaki’s branch has been in existence since 1936, but the original Chamber of Commerce office was founded in Marseille, France in 1599.

We see the Chamber’s emblem solidly backing up so many affairs and affiliations, events, and awards, so what exactly does the Chamber of Commerce do for the business populace?

Arun tells me that looking back in time, the establishment of Chambers provided merchants, traders, craftspeople, and industrialists with a public forum to discuss issues facing them as a business community. This representation of common interests became, and remains, at the core of Chambers worldwide.

Such history deserves recognition, and the Chamber’s current situation, no less so. The Taranaki branch has gone from strength to strength since its conception in 1936 and now has members totalling 735, including hubs in Bell Block and Hawera. The Chamber aims to present business opportunities; provide educational support; assist with marketing and promotional techniques; help source employment opportunities; and mentor young people into entrepreneurship.

The Petite Cha bubble tea company is one brilliant example. Petite Cha was the Young Enterprise Scheme (YES) regional winner for 2020, and its creator, Cambodian immigrant Tanya Haseltine, has now developed the business into a full-time industry.

This kind of positive outcome makes Arun’s heart sing, and he’d love to expand his role into instigating a Migrant Business Owners Network with the support of the Ministry of Ethnic Communities. As an Indian immigrant himself, he understands the additional pressures and challenges faced by migrants and also their ethos of hard work and humility.

Arun is nothing if not humble himself. He feels honoured to be in a position that assists businesses to succeed and – after a Chamber involvement spanning almost two decades – to share his wisdom. Arun says the Chamber is all about setting up relationships and making connections – often with influential and well-networked people – and bringing those connections down to grassroots businesses in Taranaki.

“It’s a position of absolute privilege to have that kind of overview. Building those connections means we can start opening doors for businesses here in Taranaki and create opportunities,” he says.

Being aware of the impermanence of privilege and keeping grounded are key to conquering the dross that goes on inside our heads. Arun reckons that learning how to control the space between our ears makes life manageable, and that most of the activity that bothers us is surmountable once we understand ourselves. Wise words!

Arun leaves me with a few more: “Remember Simon Sinek’s Ceramic and Styrofoam Cup story. It tells us that even though we might be in a position to move mountains just now, none of us actually deserves a ceramic cup, only a Styrofoam cup. It means that your time spent in a role of influence and deference will one day come to an end. Separate yourself from the position you hold and remain humble, because [as in another analogy: the Fused Bulb story], when the game is over, the king and the pawn go back in the same box.”