Ancient healing in a modern crisis

When news of the coronavirus hit headlines in early 2020 and countries around the world began shutting down, the president of Belarus delivered the nation some prime health advice: “Drink vodka, go to saunas, and return to work.”

His words were quickly rebuffed by the World Health Organisation, who warned that alcohol should always be consumed in moderation, and anyway, drinking would not actually prevent anyone from contracting COVID-19.

When news of the coronavirus hit headlines in early 2020 and countries around the world began shutting down, the president of Belarus delivered the nation some prime health advice: “Drink vodka, go to saunas, and return to work.”

His words were quickly rebuffed by the World Health Organisation, who warned that alcohol should always be consumed in moderation, and anyway, drinking would not actually prevent anyone from contracting COVID-19.

But in the early days of the pandemic, with the vaccine still a long way off, the world was scrambling to control the virus in any way possible. Amid the masks and the social distancing came a renewed interest in traditional herbal remedies and healing: ancient practices that had been used throughout history to restore health and boost immune function.

Traditional Chinese medicine originated more than 3000 years ago and is still widely used in China and the West. Research shows it has been utilised – often successfully – to treat infectious diseases and control the spread of some 500 epidemics throughout history.

Unsurprisingly, TCM has been used extensively throughout China following the COVID-19 outbreak in February 2020. It has been the primary means of treatment for patients with mild symptoms such as fever, cough, and fatigue. For the more severely ill, TCM was often combined with Western medicine. According to some reports, this customised version of treatment “significantly reduced mortality, shortened fevers, and decreased chest abnormalities”. TCM was also used to help patients recover from the virus and reduce the risk of infection between close contacts of those affected, as well as those in quarantine and frontline workers.

By July 2021, Nanjing’s hospital had distributed over 15,000 doses of TCM decoctions to help control the recent spike in COVID-19 infections.

TCM is partly based on the concept of qi – the flow of energy through the body’s meridians. Illness occurs when qi is blocked or unbalanced. This imbalance can occur due to external forces (wind, cold, or heat), internal forces (joy, anger, fear), and/or lifestyle factors (poor diet, lack of sleep, excess alcohol). 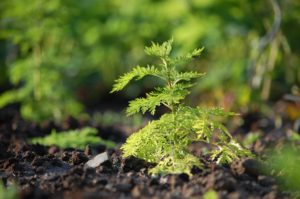 TCM doctors may use several types of treatment to restore qi balance. These include acupuncture, which involves placing fine needles along the body’s meridians; Chinese herbs to help remove toxins and improve flow; cupping, which uses suction to help stimulate qi; and moxibustion, a therapy that involves burning moxa (mugwort root) made from dried Artemisia vulgaris, to assist with healing.

Ayurveda has been practised for over 3000 years – as long as TCM – and consists of similar herbal medicines. It continues to be a popular system of medicine in India, where millions still use it either exclusively or in conjunction with modern medicine. Throughout the COVID pandemic, the demand for Ayurvedic remedies reached an all-time high; especially after the prime minister himself encouraged their use.

In March 2021, PM Narendra Modi extolled the benefits of herbal medicine, saying: “From the plants to your plate, from matters of physical strength to mental well-being, the impact and influence of Ayurveda and traditional medicine is immense.”

The Ministry of AYUSH (Ayurveda, Yoga, Naturopathy, Unani, Siddha, Sowa-Rigpa and Homoeopathy; a branch of the Ministry of Complementary and Alternative Medicine) released a set of guidelines for improving self-care with Ayurvedic principles, while the World Health Organisation established a Global Centre for Traditional Medicine in India.

Ayurveda is based on the principle that one’s mental and physical health is determined by three doshas (constitutions): vata, kapha, and pitta. COVID-19 is classified as a janapadodhwamsa vikara (an epidemic disease) with a vata-kapha predominant (the two doshas predominant in one’s constitution) fever.

Ayurveda offers several treatment options for enhancing immunity against respiratory illnesses, and at least one study (Ayurvedic treatment of COVID-19/SARS-CoV-2: A case report) has claimed that it can halt the progression of COVID-19. Treatment in this particular study consisted of Sudarsana Churna, a combination of antiviral and antimicrobial herbs including sandalwood, neem, turmeric, and ginger. Sudarsana Churna is believed to alleviate all three doshas and cure all types of fever. It may be used in conjunction with Dhanvantara Gutika, which uses cardamom, jasmine, cinnamon, and many other Ayurvedic herbs to balance the vata and kapha doshas in the body and treat respiratory issues such as asthma, coughs, and cold. A simple diet of soup made of mung dal and cooked parboiled rice is also recommended to manage fever.

Researchers have noted that the above treatments did not ‘cure’ their patient, but that their condition did not worsen, stating: “Ayurvedic medicines arrested the progress of the disease to a more serious state.”

In South Africa, the pandemic triggered a renewed interest in the indigenous herb Artemisia afra. Market stalls and roadside vendors waved signs for the silvery leaves of mhlonyane (the plant’s Zulu name), and plants were even robbed from private gardens. By 2021, the price of the herb had doubled.

Artemisia has been used for centuries to treat a variety of bacterial and viral illnesses, from coughs and colds to intestinal worms. During the first wave of COVID in early 2020, Artemisia became a hot commodity, along with many other herbal medicines – including cannabis.

In April 2020, Madagascar’s president Andry Rajoelina even launched COVID-Organics, a herbal tonic made with Artemisia. Mr. Rajoelina claimed that he had found the “preventive and curative” remedy for the virus and publicly sipped from a bottle on live television before ordering a nationwide distribution to families.

A phase II trial of the tonic was completed in January 2021, but Madagascar denied requests for data.

When recurring lockdowns increased demand for personalised healing, many sangomas took their ancient practices online. A sangoma (a practitioner of ngoma, a philosophy based on a belief in ancestral spirits; healer, shaman, or priest) may be regarded as a doctor, counsellor, and a spiritual guide, all in one.

Typically, a consultation with a sangoma involves burning imphepho, a type of indigenous herb used to summon the spirits of ancestors. Treatments can include traditional medicines known as muti: herbs and animal bones ground into powder. Some sangomas may also practise throwing the bones: scattering bones by hand and reading where they fall.

Although remedies are rarely subjected to scientific scrutiny, the Traditional Healers Organisation (THO) is now officially recognised by the government for their role in African society.

When Peru’s underfunded medical system was overwhelmed by rising COVID-19 cases at the beginning of the pandemic, physicians began treating patients with Ivermectin, an antiparasitic drug. Despite the lack of evidence for its effectiveness in treating the virus, Peru’s government went on to include Ivermectin in its treatment protocol.

Amid the panic, the people of Peru sought alternatives.

There is already substantial evidence of medicinal plants that have been effective in previous pandemics (SARS-CoV-1 and MERS-CoV). In 2021, a survey of 1,747 people revealed that just over 80% had turned to medicinal plants to help prevent them from contracting COVID-19. Another 71% were using herbs to treat symptoms.

Eucalyptus, ginger, garlic, matico, chamomile, and coca were the most frequently used plants, particularly for treating respiratory symptoms. Eucalyptus is now one of the most planted trees around the world, widely used as a medicinal plant in Peru to treat bronchitis, respiration, cold, cough, flu, sinusitis, and asthma.

Traditional medicine continues to be used by people living on the coast, mountains, and jungles of Peru. Today, the Flora of Peru registers more than 22,000 species of medicinal plants.

Peru’s indigenous Shipibo-Konibo people live along the Ucayali River in the Amazon rainforest. With limited access to hospitals or medicine during the pandemic, the tribe had little choice but to resort to ancestral medicine. The green leaves of matico have been often used by the Shipibo-Konibos in steam baths and infusions or drunk as a tea.

While businesses around the world have struggled to survive the economic impact of the health crisis, the mānuka honey industry in New Zealand has skyrocketed. By the end of May 2020, New Zealand had exported an estimated $NZD413 million worth of honey: a four-fold increase on the previous decade. Honey exports were reportedly worth $NZD49 million, a 53% increase compared to the same month in the previous year. One airline alone transported 10 tonnes of honey to New York during lockdown.

The medicinal use of honey is by no means novel: some of the world’s oldest literature describes its healing benefits. The Iranian scientist and doctor Avicenna declared honey to be “one of the best remedies for tuberculosis” almost 1000 years ago.

The Leptospermum scoparium flower, native to New Zealand and southeast Australia, supplies the nectar that makes mānuka honey so special. It was in the mid-1980s that Professor Peter Molan of Waikato University first reported the unusual biological activity of mānuka honey and began testing its action against a range of different bacterial species.

Today, dozens of published studies have documented the antibacterial potential of this honey. Prior to the current pandemic, the growing crisis of antibiotic resistance had revived interest in the use of honey as an effective therapy in its own right.

While the effects of mānuka honey on COVID-19 are yet to be investigated, previous research and anecdotal evidence suggests that it has potential. Studies have already shown that honey may deter the influenza virus and even prevent virus replication. These possible antiviral benefits – and/or the ability of mānuka to boost the immune response – may help in reducing the severity of infections.

But until this is proven, any unsubstantiated claims are effectively banned. In 2020, one New Zealand-based honey company was forced to remove its social media assertions that mānuka honey “may help to minimise the risk of getting a virus”. The claim breached New Zealand’s strict Advertising Standard Authority’s Therapeutic and Health Advertising Code.

Unlikely as it is that much good could come from the pandemic, this return to traditional healing – and a renewed interest in self-care – surely offers some hope for the future.

Sources: 1. Traditional Chinese medicine in COVID-19; 2. Ayurvedic treatment of COVID-19/SARS-CoV-2: A case report, sciencedirect.com 3. What Are the Ayurveda Doshas? Vata, Kapha, and Pitta Explained, healthline.com 4. Use of medicinal plants for COVID-19 prevention and respiratory symptom treatment during the pandemic in Cusco, Peru: A cross-sectional survey, journals.plos.org 5. Prospects of honey in fighting against COVID-19: pharmacological insights and therapeutic promises, ncbi.nlm.nih.gov