A Hundred Years Under the Hammer; The Astonishing World of Dunbar Sloane

I visited the auction house of Dunbar Sloane on a recent trip to Wellington. The pretext was a catch up with a friend who is catalogue photographer for the company. Stumbling down the stairs of DS, although landing safely, I promptly keeled over and went to heaven anyway. I had disembarked at an enchanting emporium of things; pieces with provenances imposing and modest; occasionally tragic; often remarkable and hidden from the world until auctioned in a tense exchange of chattels and cash.

The Featherston Street subterranean warehouse I fell into is an admirable resting spot for Dunbar Sloane’s eclectic collection, and it’s packed to the gunnels. The original abode was 30 Waring Taylor Street and as a 'character' building, its architecture is a style that paid fitting tribute to the persona and activities of the company for more than 50 years, now sold to leading shared workspace provider Generator and undergoing a $25 million renovation.

I visited the auction house of Dunbar Sloane on a recent trip to Wellington. The pretext was a catch up with a friend who is catalogue photographer for the company. Stumbling down the stairs of DS, although landing safely, I promptly keeled over and went to heaven anyway. I had disembarked at an enchanting emporium of things; pieces with provenances imposing and modest; occasionally tragic; often remarkable and hidden from the world until auctioned in a tense exchange of chattels and cash.

The Featherston Street subterranean warehouse I fell into is an admirable resting spot for Dunbar Sloane’s eclectic collection, and it’s packed to the gunnels. The original abode was 30 Waring Taylor Street and as a ‘character’ building, its architecture is a style that paid fitting tribute to the persona and activities of the company for more than 50 years, now sold to leading shared workspace provider Generator and undergoing a $25 million renovation.

Once complete, I wonder if it will have any of the intrigue of Featherston Street? I tiptoe carefully around stacks of New Zealand and international artworks; hover longingly over ornately carved tables providing solid carriage for neat piles of fine porcelain crockery and sensible studio ceramics. I squint through the bright glass windows of dark-wooded cabinets and gaze at covetable art deco jewellery and exquisite miniature statues. I itch to run my fingers over the smooth lines of indigenous pounamu artefacts locked away in another glass-fronted cabinet and swoon at the curvaceous lines of a deep-seated armchair that might once have cradled the bum of an Italian count.

Dunbar Sloane is the Airbnb of objects that mean something to someone. They stay comfortably housed, well-tended and preserved until there are enough of their ilk for the auctioneer to put the hammer to the block. So far, four generations of the Dunbar Sloane family have picked up that gavel and lowered the well-aimed smite that indicates ‘sale made’. They’re experts: the firm has been dealing and auctioneering for 103 years.

Auctioneering is the ancient and charismatic art of taking bids and selling goods. The process is defined (and lionised) by the chanting cadence of the caller – the “rhythmic poetry with numbers” – and the rising passions of desire, excitement, and resignation. Attending an auction is an interesting observation in social behaviour and a means of trade that’s existed for more than 2000 years.

No less impassioned were its early beginnings in Greece when the spoils of war, family estates, and Babylonian brides were auctioned off and, famously in Rome, when the Praetorian Guard put the entire Roman Empire on the auction block in 193 AD. Auctions lost favour from the end of this period, achieved a mention in the Oxford English Dictionary in 1595, and then resurged in the 17th and 18th centuries.

In England during this time, ‘candle’ auctions were an accepted method of selling goods, leaseholds and even ships. These auctions were won by whoever had the last bid before the candle’s flame expired. No one knew when a gust of wind might precipitate that event so punters realised it was pointless to hold out for a last-minute tactical bid, and prices shot up pretty jolly quickly. Things sold “by an inch of a candle”.

The first known auction house in the world was Stockholm Auction House, Sweden (founded by Baron Claes Rålamb in 1674), and with the arrival of European pilgrims on their eastern shores around this time, America’s forays into the fast-paced industry soon began. Crops, cattle, commodities, tools, and land went under the hammer, and the practice became increasingly popular.

The word ‘increasing’ is key to the auctioneering process. Stemming from the Greek “auctum“, meaning “I increase”, the purpose is to raise the price of an article by calling out for ‘bids’ of increasing value until the highest and final bidder wins. While the technique has an important role in assisting vendors reduce debt (indeed, during the Great Depression of the late 1920s-‘30s it was heavily utilised in liquidating assets to pay debtors), current day contexts in auctioneering are more diverse, far-reaching, and in fact, beautiful.

For New Zealand’s oldest auction house, Dunbar Sloane, trade has evolved from its original gambit of dealing in homes and land to selling the chattels of the houses instead. The business represents a fascinating chronicle of events in history, beginning in 1919 when Andrew Dunbar Sloane returned home from World War 1, and after being gassed at Gallipoli, no longer able to work in his previous pharmaceutical occupation.

Setting up an auction house in his old chemist shop on Lambton Quay, Sloane sold virtually anything and everything under the hammer. The business grew and diversified, fielding several iterations and locations, and shifting heavy household items like carpets, radiograms, and furniture. It eventually employed Dunbar Clifford Sloane – the second of four consecutive generations of ‘Dunbars’ to follow in the family trade in a merry merging of family life and business.

Dunbar Clifford took to auctioneering like a duck to water, and his auction room theatrics were almost as interesting and entertaining as the sale goods on his floor. Son Dunbar Russell Sloane was next on the podium to raise the hammer and his aspiring nature broadened the scope of the auction house to incorporate art and antiques alongside the bread and butter trade of property and possessions. The company held its first specialist art auction in 1935 and took about £18,000; it was a roaring success, allowing the company to continue its steady growth over the next several decades, expanding into Auckland in the ’90s.

Current company director Dunbar Michael Sloane chose to enter the industry in 1995 after an earlier career in foreign currency and lending. He transferred from Wellington to run the Auckland branch in 2004 and points out that his family have collecting and auctioneering running through their veins. Sloane Junior, as he is called, says: “I guess the whole auction business enters you through a type of ‘osmosis’ when growing up. You realise at a certain age you have a natural affinity with rare items and the ability to value them and appreciate them. I definitely grew up surrounded by art, artefacts and antiques displayed at home. I spent some of the school holidays working at the auction room, so it was ‘in my blood’ from my early days.”

Looking back and moving forward from those days, the company has never wavered in its heritage, ethics, and values. Keeping current with the times has meant changes in formula, but “basically the fundamentals are still the same as when we opened in 1919,” says Sloane Jnr.

Solid business foundations have assisted Dunbar Sloane in becoming New Zealand’s premier valuable goods auction house and in being appointed the responsibility of valuing some of New Zealand’s most precious items, including the entire art collection of the Museum of New Zealand Te Papa Tongarewa, the collection of art and documents at the Turnbull Library, and the Treaty of Waitangi at Archives NZ.

They’ve also stood the company in good stead as Dunbar Sloane contends with the online world: “Nowadays, we have made the transition to online auctions, digital catalogues, and specialised auctions. This has drawn in a larger pool of both buyers and sellers than pre the digital era. We are now busier than ever as a result, selling to a very wide demographic that can’t be pigeonholed,” he affirms.

Akin to its virtual and ephemeral audience, the business sees item trends change frequently, too. Applied art is taking centre stage at the moment, whereas 20-30 years ago, it was regarded as the poor relation to two-dimensional art, i.e., paintings and the like. Overlapping the decorative art genre (in that the objects are ultimately useful and aesthetically pleasing), applied art is tactile and endearingly functional. Teapots, vases, bowls, metalwork, jewellery, various forms of textile art and glassware are major groupings – and Dunbar Sloane handles them all with aplomb.

In a November 2021 Studio Ceramics and Applied Arts auction, the house was proud to feature “founding member of the New Zealand Society of Potters in 1963 and one of New Zealand’s most accomplished and sophisticated potters”, Len Castle. Twenty-five of his works sold, ranging from $50 to $3,000. At the same auction, a 9.5cm high, matt black Crown Lynn Swan Vase sold for $5,500; the larger versions for slightly less. A pair of British potter Lucie Rie’s stoneware Oil & Vinegar Pourers sold for $3,200. Czech-born New Zealand potter Mirek Smisek’s cobalt and brown salt glaze ‘Kapiti’ Branch Pot for $4,600. A Raewyn Atkinson earthenware ‘Gifts of Civilization’ Hawai’ian Bowl for $4,000. Kiwi glass artist Sue Hawker’s ‘Too Much is Never Enough’ pate de verre (glass paste) vase for $3,500; all sold plus premium. 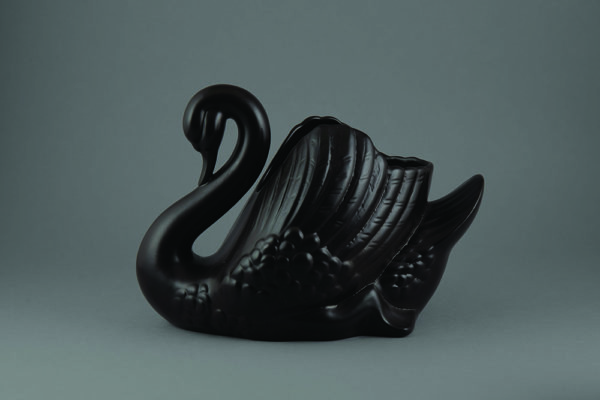 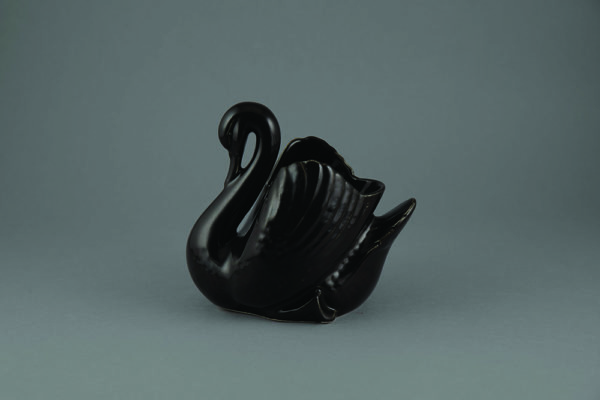 It’s very heady stuff but representative of fashions right now. Paralleling the popularity for applied art is newfound enthusiasm for New Zealand and Pasifika art. “The renewed interest in Māori culture and its everyday integration in NZ is now being reflected in the desire for Māori material culture,” says Sloane Jnr.

“In our December Māori artefact auction, we sold a mere pounamu (short-bladed greenstone weapon) which belonged to a chief who signed The Treaty of Waitangi. It blew the estimate out of the water by selling for approximately $185,000. We also sold a Kiwi brooch set a few years ago that related to the Thames gold rush of the 19th century. It sold for approximately $90,000 against an estimate of $5,000-10,000.” 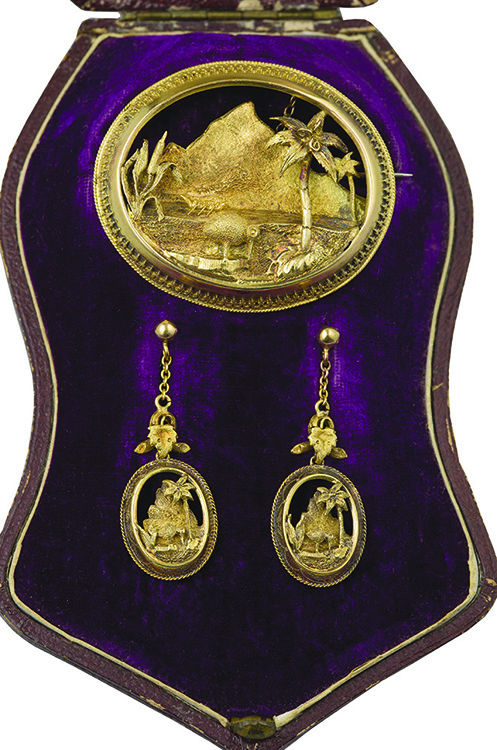 Kiwiana boxed brooch and matching pendant drop earrings made from 18-carat New Zealand colonial gold, part of the estate of Samuel James, owner of the Success gold mine in the Coromandel in the 1880s. Possibly the jewellery work of noted German-born engraver and jeweller Anton Teutenberg. 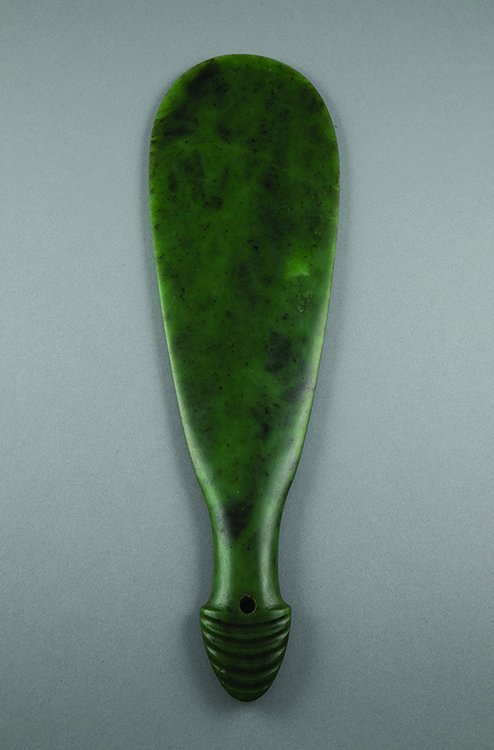 “Most buyers are after rarity. The items we sell by and large are not being produced anymore. There is a finite collection left. Also, there is a feel-good factor for many of the buyers that they are recycling goods,” smiles Sloane.

From seller to buyer, those transactions entail measures of awe, relief, delight and, perhaps, heartbreak. For a hundred years, Dunbar Sloane has eased the process. And while “tastes change and markets change, the auction industry still retains its magic by making material discoveries and presenting these rare items to the public,” the show must go on.