Mind you – reflections on depression from different cultures

Mind you – reflections on depression from different cultures

Dubbed “the common cold of mental illness”, depression has reached epidemic proportions amongst European nations and English speaking countries. At the other end of the spectrum, there are languages that don’t even have a word for ‘depression’. Alina Suchanski explores how different cultures perceive and deal with this debilitating illness and talks to young people affected by it.

Dubbed “the common cold of mental illness”, depression has reached epidemic proportions amongst European nations and English speaking countries. At the other end of the spectrum, there are languages that don’t even have a word for ‘depression’. Alina Suchanski explores how different cultures perceive and deal with this debilitating illness and talks to young people affected by it.

Anyone can experience depression – the triggers can be different, but the symptoms are similar. Yet, fame and fortune are no guarantee of immunity; US President Abraham Lincoln, Princess Diana, actor Robin Williams, singer Lady Gaga, writer JK Rowling, and Kiwi rugby player John Kirwan, all suffered from depression.

As we live in times of global warming, natural disasters, pandemics and wars, and fed on a diet of bad news served daily via the Internet and the media, our minds either become desensitised or poisoned with the potential of putting our mental health at risk.

The Mental Health Foundation of New Zealand defines depression as “a mental health problem that can affect how you feel and behave for weeks or months at a time. When you are depressed, your low mood lasts, affecting your sleep, relationships, job, and appetite”. The symptoms of depression are varied and can include loss of enjoyment of life, fatigue, low appetite, loss of libido and purpose, insomnia, social withdrawal, feelings of hopelessness, despair, sadness, worthlessness, guilt, pessimism, and even suicidal ideation.

People with a family history of mental disorders are more likely to succumb to depression, and women are more prone than men.

The reasons behind mood disorders can come from three sources:

Dutch clinical psychologist Jan Derksen says that in the western world most mood disorders are a product of psychological determinants, such as being introverted, extremely self-critical or hard-driven. “That’s typical in the West and has to do with the individualisation of our culture. It started with ancient Greeks and Romans, then we had the Renaissance and the Enlightenment, which all produced individualised people, who have a strong feeling of identity. It’s quite different from African or Eastern cultures in which the surroundings [the community] and family are more crucial, and there’s less pressure on identity,” Derksen says (Depression in Different Cultures, 2019).

He sheds some light on why so many millennials are affected. These are people born from the 1980s onwards – times of great prosperity for some western countries. Many lacked for nothing and grew up sheltered by their parents who saw to all their needs and wishes. This generation supposedly did not have a chance to develop the self-reliance, resilience, and self-esteem, needing to face the realities of life as young adults, which, coupled with the rise of social media pressure has resulted in increasing cases of mental distress.

According to Mosima, the difference between how depression is treated or viewed in Africa versus the West stems from differences in philosophy. In African culture, a person is defined by their association with others; by their community. “In western countries, depression is a private thing. You go and see psychotherapist, you talk. It is very confidential. It’s a matter between the patient and the therapist. Sometimes he gives you pills. In Africa, it’s not like this. Healing is an integral part of the society and religion. It is a public thing. Firstly, the whole village comes to the yard, and they talk. The whole community is involved. Secondly, rituals are performed to create harmony between you, the community, and the ancestors. There is music, dancing and singing. We don’t use pills. We use herbs and beads,” Mosima explains. His advice: “If you have a problem, talk it out, consult your friends. Don’t stay at home and suffer alone. Belong to social groups. Talk to them. And last, but not least, don’t over-take those pills. Relax and keep your mind free.”

Michelle Musakwa is a PhD student at Massey University’s Psychology Department. The title of her research is ‘The Conceptualisation of Mental Health Among Black Sub-Saharan Migrants and Refugees in New Zealand’. Originally from Zimbabwe, Musakwa moved to New Zealand with her parents when she was eight.

She says that in the past, mental health issues were seen as taboo in Africa and viewed by the family as something shameful. The person affected would be branded as being cursed or crazy and treated by a religious leader or a traditional healer. “Mental health stigma is still present amongst the older generation. However, there is a shift among the younger generation to support people affected by it and help them make their life better,” she says.

“In Africa, depression is not talked about. It is a very western term.” Musakwa prefers to use the term ‘mental distress’ and says: “The western way of managing mental health is not the only way. There’s space for spiritual ways to treat mental distress. There’s yet research and literature to be developed for non-western ways.”

She noticed that many immigrants from Africa as well as those from her personal circles wanted to know how to fill this knowledge gap. In addition, grappling with issues such as cultural assimilation, intergenerational conflict, culture shock, language difficulties, and lack of social support is challenging: “Coming from a collectivistic background they find emigration cuts off their support system,” she says.

Ahlam Riyashy was born in Tanzania, but her ethnicity is Arab; half Omani, half Yemeni. She now lives in Nottingham, England and works as a pharmacist. She is also a spiritual and mental health coach with a passion for empowering Muslim women to find healing within themselves and Allah. She talks about what it means to be Muslim and to suffer from depression. “First of all, it means that you’re human. You’re struggling with something mentally and emotionally. Hardships are a fact of life and affect our mental health,” she says.

According to Riyashy, a common misunderstanding amongst Muslims is that depression equals low iman (faith). “This wrong belief of corelating depression with low iman instils guilt and shame. Another common cultural belief is that being depressed means that you are ungrateful for your blessings. This is not the case at all. It adds another layer of shame and results in the person becoming more depressed. Another belief that Muslims hold is that depression does not exist in Islam. This is a wrong understanding of mental health. Suffering depression is a human experience and even the prophets weren’t exempt from it,” she says.

Riyashy offers recommendations that are universal; not necessarily specific to Muslims. She suggests that in dealing with depression, the first step is to speak to someone close to you or a trusted and experienced professional. “Once you become honest with yourself about your emotions and share it with someone else who listens, you will feel a great weight lifted. It is the acknowledgement that starts to bring healing,” and advises: “Cross things off your to-do list. Make your life as easy as possible. Relax, slow down. Ask for help with your daily chores, whether it’s from family members, or you have enough money to hire people. Alleviating the responsibilities that are on your shoulders is a good way of helping yourself while you’re going through depression.”

She encourages to take a holistic approach, by assessing the factors that can affect your mental health and addressing them accordingly. Get a blood test to check if there are any deficiencies, such as low vitamin D. Take medication, just as you’d take medication for a physical illness. Consider your diet and your sleep; move away from people who are negatively impacting on you. Hold onto your religion.” 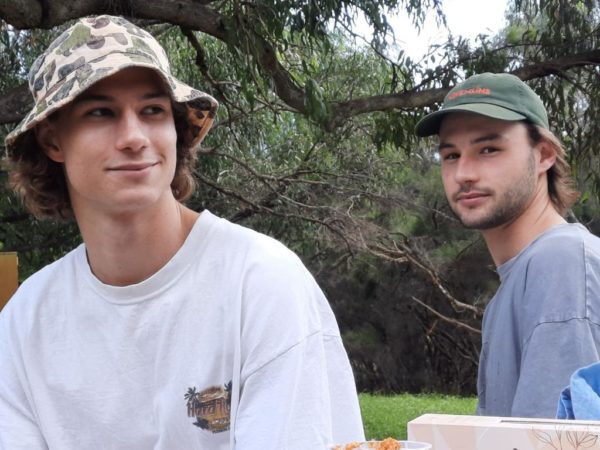 During a family ski holiday in New Zealand, 2012, Australian-born brothers Zach and Nath lost their father to a heart attack. They were just 13 and 9 respectively. Zach witnessed his father’s collapse and the attempts of patrol staff to resuscitate him. This had a devastating effect on the boy and what followed was a 10-year battle with anxiety and depression.

Their mother says that “Zach was a child with the world at his feet. He literally had it all – intelligence, co-ordination in buckets, sociability, humility, kindness, wit, and good looks.”

After his father passed away, Zach didn’t leave the house for a month. He lost interest in school and when he finally went back, his brain was ‘fuzzy’, and he couldn’t concentrate. His grades went down. “I became closed off to all except my closest friends. To everyone else I was faking it, putting on a happy, cheerful façade when I felt that my whole world was crushing down around me,” he confesses.

Zach started to see a psychologist when he was 15. “I didn’t want to go, but Mum took me there. I stuck with him for a few months while we were talking about life in general, but once he brought up Dad, I didn’t want to go back.”

He says that what really helped him overcome depression was “removing the thoughts of the past and the future and being right in the moment; it was like lifting a veil.”

Zach’s younger brother, Nath suffered mental distress, as well, but to a lesser degree. His school results also deteriorated. He became rebellious, had no respect for authority, and exhibited disruptive behaviour in class to the point that he was forced to undergo psychotherapy or face being expelled. He tried therapy four times with mixed results. “It works, but you need to find the right person and be committed to put in the work,” he says.

Now aged 23 and 19, Zach and Nath are on their way out of depression. A strong bond between the brothers means they want to work together. Last year they started a garden maintenance business, but now their passion for healthy organic food has put them on the path of growing exotic mushrooms.

Anyone, regardless of cultural background, can suffer from depression, although there are differences in how depression is perceived and treated in different cultures. The demand for counselling and therapy is growing, as more people become aware that professional help is available. There is always hope.