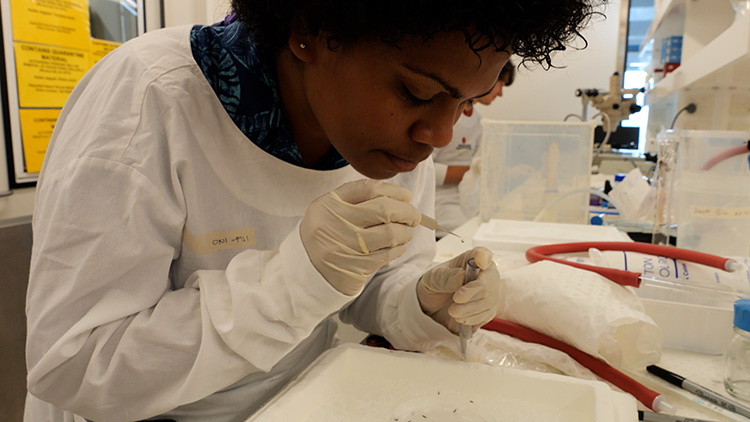 BiograView was contacted by QIMR Berghofer Medical Research Institute with a media release of this Pacific alliance to combat mosquito-borne diseases.

With all the hype around Covid-19 it is easy to forget other diseases still prevalent in the world.

It is great to see so many international organisations working together to combat the still-present, mosquito-borne diseases.

Twelve international institutions in collaboration with 22 Pacific countries and partners with expertise in mosquito-borne disease control are working together to tackle this problem.

According to Assoc. Prof. Greg Devine, Group Leader, Mosquito Control Laboratory, QIMR Berghofer,
“Dengue is the fastest growing, emerging mosquito-borne disease that we have with over 400 million cases annually across the globe.”
“There are no effective vaccines against malaria or most arboviruses.”
Devine, G. (2022). Mosquito Control. QIMR Berghofer Medical Research Institute.

I am interested to know how are people currently being treated if infected with any mosquito-borne virus, as there are no effective vaccines against malaria or most arboviruses and with no vaccine or chemotherapeutics available at this point in time.

Greg: The WHO has carefully considered guidelines for the control and treatment of malaria. There is a strong evidence base for their recommendations (google WHO/UCN/GMP/2022.01 Rev.1). Insecticide treated bed nets and indoor residual insecticide applications for Anopheles control continue to be a central pillar of many malaria control programs. A number of drugs are available for the prevention or treatment of malaria. The specific drugs and treatment schedules differ depending on malaria type (e.g., vivax or falciparum), the human population at risk, and whether the aim is to prevent or treat infections. A single vaccine is now also recommended for children in regions with moderate to high transmission of falciparum malaria.

There are excellent vaccines available for some arboviruses (i.e. yellow fever, Japanese encephalitis [JEV]) but the urban, Aedes-borne diseases of dengue, chikungunya and Zika have no vaccines, and there are no drugs for the treatment of patients infected by any arbovirus. That’s why, of the 40 cases of JEV recently reported in Australia, there were 6 deaths.

Prof. Tom Burkot, JCU / Co-lead PacMOSSI, says that research to combat arboviruses are “focused primarily on Aedes mosquitoes which transmit dengue, Zika and chikunganya, and the Anopheles which transmit malaria.”

BiograView: What would be the best way to deal with mosquitos if they have become insecticide-shy and only bite outside of people’s homes? For example would you consider creating new homeopathic remedies to treat people infected with a virus as well as developing a new vaccine to prevent future infections?

Tom: Firstly, it’s important to understand that mosquitoes can show a lot of plasticity in their behaviours. For example, while many mosquito species are changing their behaviours to bite more frequently outside and early in the evening when people are outside, a proportion of the mosquito population is still entering houses looking for a blood meal so the indoor interventions can still have a significant impact on transmission. This is because a mosquito has to first become infected by biting on a host with the pathogen, and then the mosquito has to live long enough for the pathogen to multiple in the mosquitoes and to disseminate throughout the mosquito so that it can transmit the pathogen via its saliva when it bites. During this period of time, the mosquito is feeding on blood but is not yet infectious. If during this non-infectious period, it enters a house, it may be exposed to the insecticide used indoor and will be killed before it can transmit. So outdoor biting makes indoor interventions less effective than if most mosquitoes were biting indoors late at night.

BiograView: Are mosquito-borne virus infections always fatal for a human being or can they be less severe also?

But even here in New Zealand we haven’t escaped this. I (BiograView) am surprised to see the numbers recorded between 2002 and 2020, and ask why Pacific Peoples in New Zealand commonly had higher rates of mosquito-borne diseases, compared to Asian, European, or other ethnicities, according to a study published by Massey University and Environmental Health Intelligence New Zealand (EHINZ), (2021).

Greg: Of course, many of the infections reported in NZ (chikungunya, dengue, Ross River, Zika, malaria) originated overseas. None of these diseases are endemic in NZ.

As none of these infections are contracted in NZ, it can only be travel patterns and demographics – Pacific Peoples visiting the PICTs (Pacific Island Countries and Territories) are more likely to be exposed to mosquito borne disease than if they were visiting Europe (climate) or some Asian countries (e.g., China).

Tom: There are a number of factors that affect the rates of mosquito borne diseases amongst populations. Firstly, the Pacific Peoples live in the tropics and the tropical environment is conducive to growing lots of mosquitoes which increases the risk of transmission taking place. Secondly, the absence of a cold winter season means that the transmission season for mosquitoes is longer than in more temperate areas. A third factor is socio-economic. Individuals in lower or middle income countries with lower income levels have less access and use of mosquito prevention strategies making them more vulnerable to being bitten by mosquitoes.

Tom: A number of arboviruses have animal reservoirs that support the propagation of human viruses transmitted by mosquitoes including the viruses that cause Japanese encephalitis (JE), Rift Valley (RV) and Ross River (RR). Some, but not all of these viruses can cause illness and even death in the reservoir animals.

Greg: We don’t fully understand the transmission cycles of disease like RRV or even, in Australia, the relatively well characterised JE. They have many potential reservoirs in the domestic and wild animal population, and many potential mosquito vectors. It is notable that many of these viruses are expanding in range (RRV across the Pacific, JEV in Australia and north Asia, West Nile virus (WNV) across Europe and the Americas). In relation to World Animal Day, the “One Health” approach to understanding these diseases recognizes that the health of people is closely connected to the health of animals and the environment, and the concept is increasingly important in our rapidly changing world. 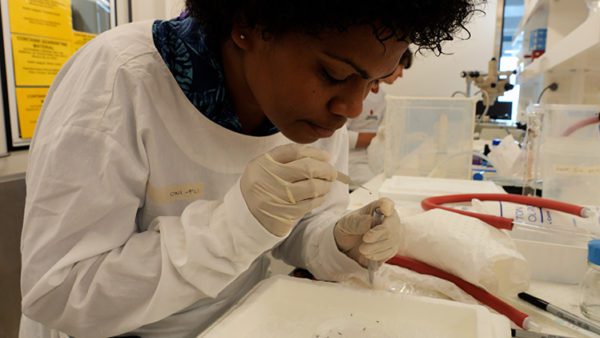 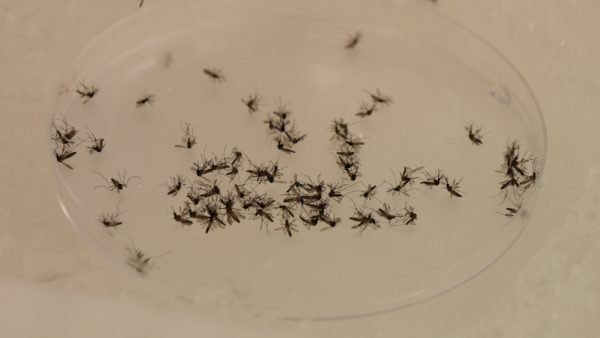 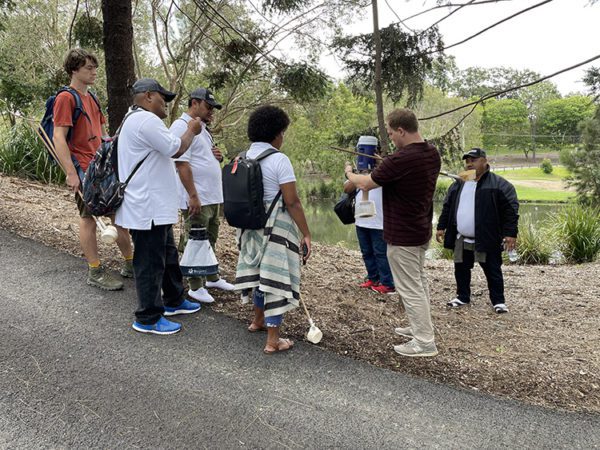 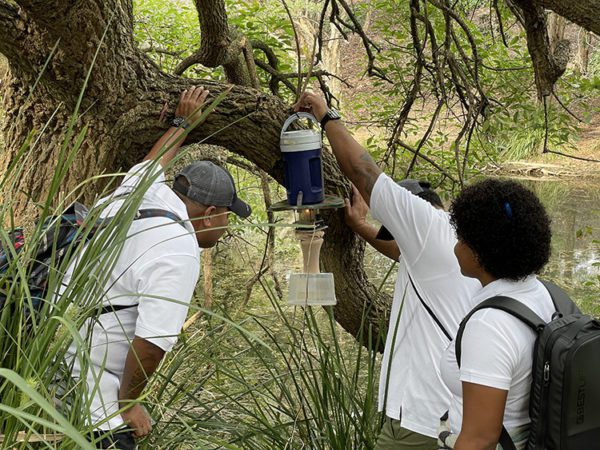 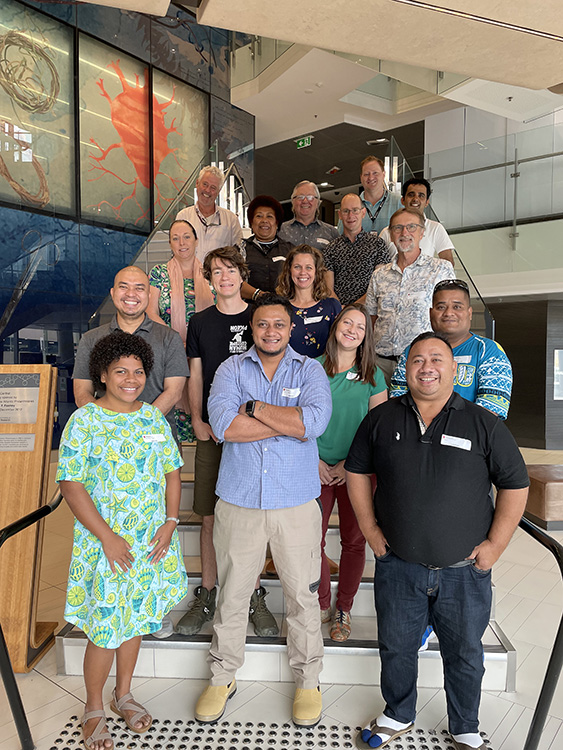 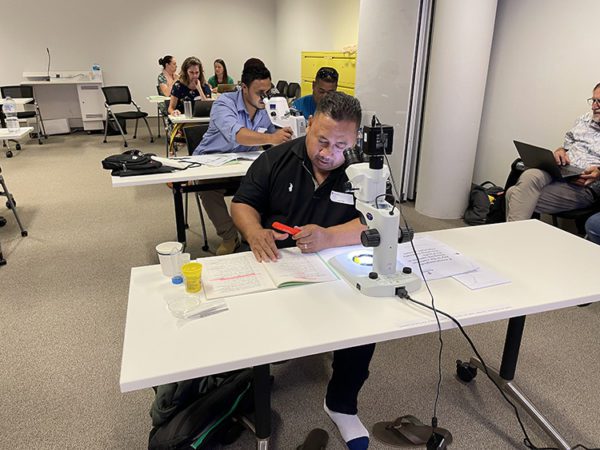 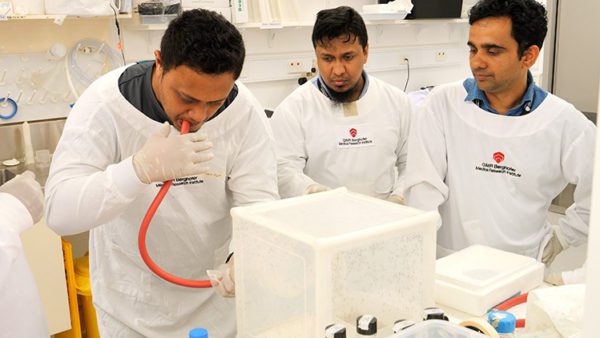 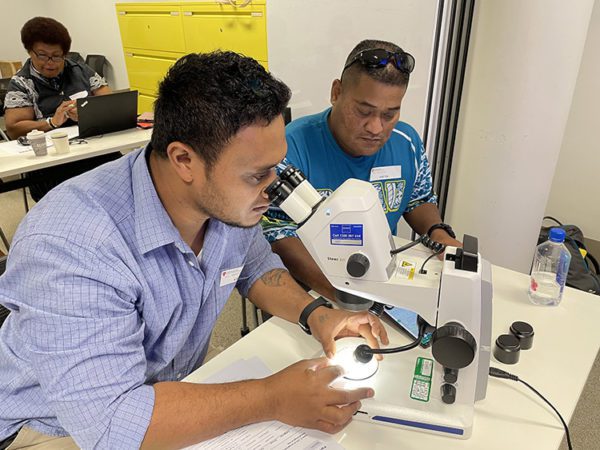 What I found interesting is the fact that a mosquito has to first become infected by biting on a host with the pathogen (see Tom’s answer, paragraph 13) before it can become infectious. This raises further questions – but that’s another story.

Check out the media release for yourself:

The increasing spread of dangerous mosquito-borne diseases is being tackled by a unique strategic alliance of Pacific Island nations and international institutions during a series of training workshops being held at QIMR Berghofer this week.

Fuelled by climate change, population growth and interconnectedness, mosquito-borne diseases such as dengue fever and malaria are becoming more prevalent.

Participants from Fiji, Samoa, Palau and Tonga will join the first of two workshops at QIMR Berghofer’s Mosquito Control Laboratory which is one of the few facilities in the Southern Hemisphere with quarantine authority to house various exotic, insecticide-resistant mosquitoes that transmit viruses such as dengue fever, Zika virus, chikungunya, and malaria.

The training, from 26 to 30 September, is part of the Pacific Mosquito Surveillance for Impact (PacMOSSI) project – a regional partnership between Pacific Island countries and 12 international institutions working to combat mosquito-borne diseases.

“The workshops will involve lab work, a field trip and modules on how to identify different mosquito species, test for insecticide resistance, and assess the effectiveness of key control tools such as bed nets.

“Environmental changes caused by climate change, population growth, and increasing travel between countries, are all contributing to the spread of mosquito-borne diseases. Without effective vaccines it is vital that we build capability to control the mosquitoes that transmit these diseases and which can cause so much suffering,” Associate Professor Devine said.

The PacMOSSI project is jointly coordinated by James Cook University (JCU), the World Health Organization (WHO), and the Pacific Community (SPC), and is supported by funding from the Australian Department of Foreign Affairs and Trade (DFAT) through the Indo-Pacific Centre for Health Security, the Agence Française de Développement of France (AFD), and the European Union.

PacMOSSI project lead and JCU entomologist Professor Tom Burkot said this was the first time training would be held in-person since it launched in 2019, with online training delivered during COVID.

“We are so excited that everyone is finally able to come together face-to-face for this PacMOSSI training. The online workshops are very comprehensive, but there is technical knowledge that is best explained and demonstrated in the laboratory, such as learning how to identify different mosquito species.

“These workshops also give participants the chance to connect with others working in mosquito surveillance and control across the Pacific. It’s incredibly important we build a strong network so we can consult with each other when challenges arise, to really enhance control of mosquito-borne diseases throughout the region,” said Professor Burkot.

“Mosquito-borne diseases remain a significant threat to the health and socioeconomic well-being of the region. The number of outbreaks is rising with 96 reported in the Pacific region between 2012 and 2021, including 69 dengue outbreaks, 12 Zika virus and 15 chikungunya.

“The PacMOSSI training is increasing the knowledge of local vector control and surveillance officers in the region, and improving the availability of data to help with decision making on how to effectively combat the spread of mosquito-borne diseases,” said Dr Saketa.

Dr Tessa Knox from WHO Vanuatu said that such training support is crucial. “As travel ramps up across the Pacific, countries are at increased risk of imported diseases like dengue. WHO is working with PacMOSSI consortium to help prepare, prevent and respond.”

A second session of workshops will be held at QIMR Berghofer from 10 to 14 October with participants from American Samoa, Guam, Nauru, Vanuatu, Papua New Guinea, Solomon Islands, and Tokelau.